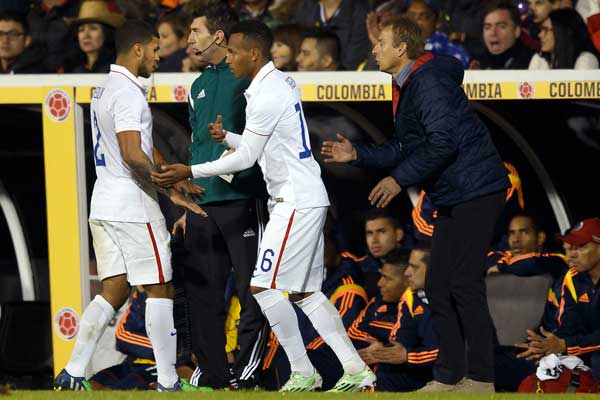 By J Hutcherson – WASHINGTON, DC (Nov 25, 2014) US Soccer Players – FIFA hasn’t been consistent with the rule for substitutes in friendly games. It wasn’t that long ago that there weren’t practical limits. Even now, with FIFA adopting the no more than six substitutes rule for international friendlies, the teams involved can allow more. Specifically, Law 3 lets the teams decide between themselves for games that aren’t “national A team matches”. That why we still see the occasional full team substitution in club friendlies. For national team friendlies, the limit is six.

That tweak made it past the International Football Association Board in 2012. The high point for creative use of substitutions was England subbing out the squad at halftime. Even with the IFAB made up of England, Scotland, Wales, and Northern Ireland, nobody thought playing different squads in each half of soccer was a laudable idea.

Even six has its critics for a simple reason. Wherever FIFA puts the maximum number of substitutes, National Team coaches are likely to use exactly that many.

For the coaches, the reasoning is simple. Use all the available substitutions to offer opportunities to as many players as possible. It is a friendly after all. What that runs up against are two things, the disruptive nature of that many substitutions and the quality of the opportunities given to players.

The disruption substituting six players causes is almost a given. High level international soccer often times hinges on shape and familiarity. Every coach knows what they’re doing by moving too many players in and out. At some point, any game becomes more of a training than competitive exercise when the substitutions don’t make clear tactical sense.

Expecting a player to do much when subbing on with a few minutes left as the fifth or sixth change is a bit naive. That was Bolton Wanderers manager Neil Lennon’s response to USMNT coach Jurgen Klinsmann calling in Tim Ream shortly before the friendly with Ireland last week. Ream made a cameo appearance, something Lennon called “a complete lack of respect” for both player and club. Lennon also said “it must have been a really exhausting minute of football with the team 4-1 down.”

That’s not a new point in the club vs country debate, and it’s certainly not something easily answered. Coaches, even the elite ones at National Team level, don’t normally spend a lot of time thinking about the broader implications of what they’re doing with friendlies. When they do, it’s complicated.

“Playing friendly games and having the substitution rule where you can bring in six players obviously changes the dynamic of games, especially towards the end of games. When you bring in subs in order to give them a chance, in order to give them experience, you sort of risk the result. Either way – it could go the good way or it could go the bad way. When you come in as a sub and you’re down a goal, it’s far more difficult to give an impact than if you’re up a goal when everything is positive and you might hit another goal from your end. So it’s not always easy for the subs to make an impression, but if we don’t do it, we miss out on too big an opportunity for these players to gain experience. So, we compromised the substitutions in a friendly game for some results. Do we want the results at the same time? Absolutely, but here and there you’ve got do it for the big picture.” USMNT coach Jurgen Klinsmann.

It’s nothing new to hear Klinsmann talk about the value of winning friendlies. Even if that value is relative, Klinsmann has always talked about winning creating a mentality. That’s certainly part of it from a fan perspective. The other is entertaining. That can be a loaded term when talking about high level soccer, with “real fans” understanding what’s really at play with these games. Meanwhile, there’s the paying customers and the television audience that likely expect more.

The problem with the substitution rule as it stands is exactly what Klinsmann describes. It becomes one or the other, playing to win or playing to give as many opportunities as the rules allow. It’s also dependent on what the other coach is doing, since it only takes one creative use of substitutes to change a game.

Whether or not the number of substitutes in international friendlies needs reducing might become somewhat of a non-issue in practice. With UEFA set to introduce their Nations League concept during the next World Cup cycle, Europe will for all practical purposes pull out of most friendlies. Instead, they’ll be replacing most friendlies with games that count. It’s a safe assumption those games won’t allow additional substitutes.

The ratings for the weekend soccer TV have the Eastern Conference finals on NBC behind the Premier League game on NBC.

The New York Post’s Mark Cannizzaro wasn’t impressed with the coaching during the Red Bulls’ loss to to New England.

MLS expansion moves forward with the latest from Las Vegas on how AEG might help that city’s bid for a team. Alan Snel has that story for the Las Vegas Review-Journal.

DC United’s stadium deal takes another step in a story by Jonathan O’Connell and Mike DeBonis in The Washington Post.

Issues mount for FIFA, with Reuters Reiji Murai explaining why a second sponsor might be moving on.