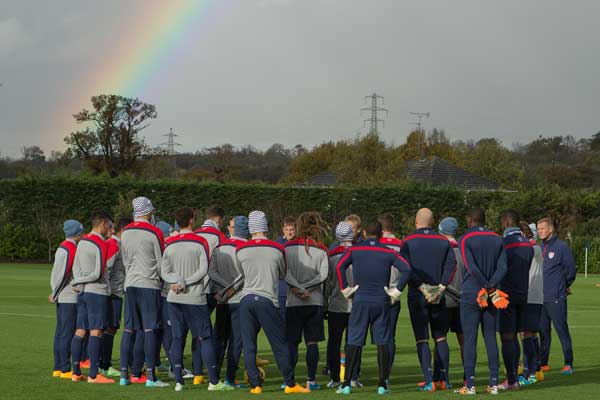 By Charles Boehm – WASHINGTON, DC (Nov 13, 2014) US Soccer Players – The USMNT returns to action on Friday (2:30pm – ESPN) in a rare juxtaposition. They host a decidedly new-school opponent – fashionable global powerhouse Colombia – at Fulham FC’s deeply old-school venue alongside London’s River Thames, the atmospheric Craven Cottage. A bevy of other contrasts are also likely to draw the eye when a USMNT in transition meet the third-best side on the planet (according to the current FIFA World Rankings, at least).

USMNT coach Jurgen Klinsmann called in a blend of young and old for this month’s brace of year-ending friendlies in London and Dublin. The transition process from the 2014 to 2018 World Cup cycles is well underway.

He’s also given us a few fascinating backstories that stand up well on their own, almost regardless of what happens against Colombia and Ireland (who host the US at Aviva Stadium on Tuesday). Here’s a few that jump out.

Klinsmann has extended another invite to two of the most head-turning call-ups of the modern USMNT era, NASL star Miguel Ibarra and Stanford prodigy Jordan Morris. When the duo originally materialized on his list, the coach set tongues wagging simply by revealing that he’s scouting players outside the top tier of the professional game.

That opened up a host of big-picture discussions about the USMNT development system as a whole. Now, it’s time to see whether Klinsmann is more concerned with elevating these two talents than he is making rhetorical points about the developmental pyramid.

Will they earn more than token minutes off the bench? Will European club scouts be sizing them up for bigger stages in the future? Even setting aside their current team situations, Ibarra and Morris appear to be rare attacking talents. Those are always in demand on this team.

“I’m coming back and getting along with the experienced guys, learning from them and listening to whatever they have to tell me,” Ibarra told NBC’s ProSoccerTalk.com on Wednesday. “The intensity, the energy, the speed. It’s about getting used to it. Last game I got used to it and now I know what to expect.”

After logging hundreds of miles as a mainstay in the USMNT midfield over the years, Jermaine Jones has another go as a defender for these games, just as he was for last month’s matchups with Ecuador and Honduras. While that nomenclature is hardly likely to prevent Klinsmann from fielding Jones in his incumbent role in the engine room should he see fit, both parties suggest that this will be an extended experiment.

This is both a unique opportunity and a dicey challenge for the 33-year-old veteran. It represents a significant compliment to his all-around contributions that Klinsmann believes he is a worthwhile option at center back, despite logging his club minutes in a roving midfield assignment for the New England Revolution. The USMNT boss has conjured up unexpected success with similar moves, like DaMarcus Beasley’s reinvention as a left back and Brad Evans’ timely contributions on the right corner of defense.

However, it also forces Jones to learn on the fly. He’s also competing with teammates, many of them several years younger than him and already well versed in the influential position.

Jones handled his first center back tryout well. How will he perform if he’s handed the job again, and against the likes of Real Madrid maestro James Rodriguez, River Plate’s Teo Gutierrez and Sevilla striker Carlos Bacca – one of La Liga’s top newcomers last season – to boot?

People make movies about less stirring odysseys than the one Lee Nguyen made around the world over the course of his unique career. That included stops at the University of Indiana, PSV Eindhoven, Danish club Randers, the Vietnamese league, and a short, ill-fated stint in Vancouver before he finally found a happy home back in the states with the New England Revolution. Nguyen wandered the globe for the better part of a decade – and his once-promising National Team career suffered for it.

Now, after a seven-year drought between call-ups that ranks as the third-longest in USMNT history, he’s back in US colors. Nguyen is riding the momentum of a simply outstanding MLS campaign full of incisive playmaking, fluid ball skills and clutch goals. He’s eager to prove that he can step right back into the program that saw him as one of its brightest prospects when coach Bob Bradley took him to Copa America in 2007.

“I was just a little teenager,” Nguyen told reporters this week, recalling his last US call-up before he departed the red-hot Revs to fly to London. “I’ve grown so much as a player and a person. It’ll definitely be different. I have more years under my belt. It’ll be a different experience going into the team.”

Hungry to have the ball at his feet and equally comfortable dictating a match’s tempo with clean passing or slashing dribbles, Nguyen carries a toolkit with few equals in the current US player pool.

With reports suggesting that he, like Jones, will depart after Friday’s game to rejoin his club ahead of their MLS Eastern Conference Championship series vs. New York, he might only get one chance to prove it. It’s one that he, like so many other members of this roster, won’t take lightly.