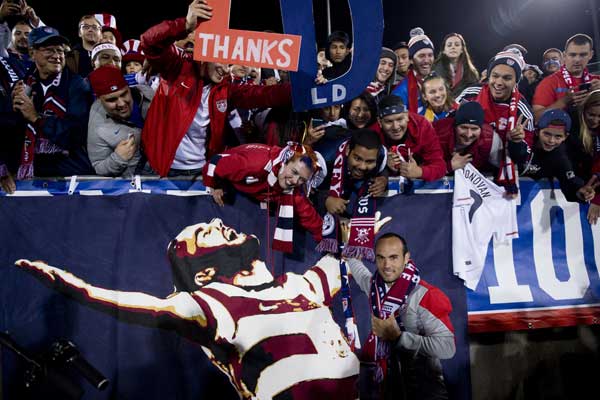 By Clemente Lisi – NEW YORK, NY (Dec 30, 2014) US Soccer Players – As we say goodbye to 2014 from a soccer-specific perspective, many of the high points are easy to name.

It was a World Cup year, which means that most of us were preoccupied for a good chunk of the summer watching 64 games that led to Germany winning a fourth World Cup. At the same time, the World Cup once again raised its game increasing the attention it deserves in this country. Thanks to globalization, the Internet, MLS, and a competitive USMNT, it seemed that soccer had finally gained mainstream acceptance in the United States – if only for a month.

MLS, meanwhile, saw its own twists and turns. The biggest storyline was Landon Donovan, who announced in A sugust that he would retire at the end of the season. Following his exclusion from the World Cup, Donovan ended his legendary career on a high note – winning a sixth MLS Cup while breaking several MLS records along the way.

Indeed, this was a great year for soccer in the US and around the world. Here are the 10 things I will miss most, in no particular order, from 2014:

He has done so much for the game in this country both on and off the field that it will be strange not to see him running down the wing or setting up a teammate once the 2015 season starts in a few months. The attacking duo he formed at the Galaxy with Robbie Keane was a delight to watch and one of the best MLS has ever seen. Off the field, he was always patient with reporters and willing to answer questions — even when he really wanted to be somewhere else. For that, thank you.

The Brazilian city was host to the World Cup final and the days leading up to the game were some of the best I’ve ever spent in a city. My hotel was just blocks from Copacabana Beach and it was a delight to see fans from across the globe gather for what became a true international festival. The Maracana was equally impressive and truly one of the best stadiums in the world to watch a game. I hope to return someday.

The people of Brazil were great, both welcoming and hospitable to the hordes of fans from around the world who visited their country. Despite my inability to speak Portuguese (a language that seems more like a never-ending song than just words), they were patient with me at supermarkets, drug stores and restaurants. Two women in particular, who worked at a gift shop near the press center along Copacabana, helped me navigate their tiny store so I could buy some trinkets for family and friends back home. Again, obrigado.

The Germans won the World Cup and deservedly so. They showed energy, tenacity and organization throughout the tournament. Goalkeeper Manuel Neurer seemed to redefine his position and the team’s high defensive line transformed him into a gloved version of Franz Beckenbauer. Thomas Muller and the attack was relentless. Its 7-1 win over Brazil in the semifinals was a game that no one will ever forget.

They flooded Rio during the World Cup. With Argentina in the final, thousands traveled across the border — in the cars and with no tickets to the final — to see their team try and win a title on Brazilian soil. Days of chanting and taunting of Brazil fans ended in despair after Argentina lost in the final.

Spain’s La Liga became a must-watch in 2014 for a number of reasons. Atletico Madrid broke the Real-Barca monopoly to win the domestic title, Real (in turn) defeated Atletico in the Champions League final to be crowned European champion for a 10th time and Barcelona, well, they have Lionel Messi. Real is also currently on a 22-winning streak, a run that included winning the FIFA Club World Cup two weeks ago against Argentina’s San Lorenzo.

While everyone argues whether Messi or Ronaldo are the best in the world, I was must entertained by Colombian striker James Rodriguez. He won the Golden Boot at the World Cup after tallying six goals and scored a contract over the summer with Real Madrid.

The USA earned a tough draw — alongside Germany, Ghana and Portugal — but survived despite having to travel more than any other country during the first round. The Americans defeated Ghana, tied Portugal and lost to Germany — but was nonetheless able to emerge second from the group. Along the way, the team became the biggest sports story of the summer while drawing high ratings for the tournament.

The USA might have had the firepower of Clint Dempsey and midfield tenacity of Jermaine Jones, but it was Howard who became the hero in the Round of 16. Despite losing 2-1 to Belgium, Howard recorded 16 saves in what was an epic game.

The World Cup was a big success for the region. The USA and Mexico reached the Round of 16, while Costa Rica got as far as the quarterfinals. This went a long way in getting the world to respect teams from North and Central America. The 2016 Copa America, to be held in the US, could be another chance for CONCACAF to shine.