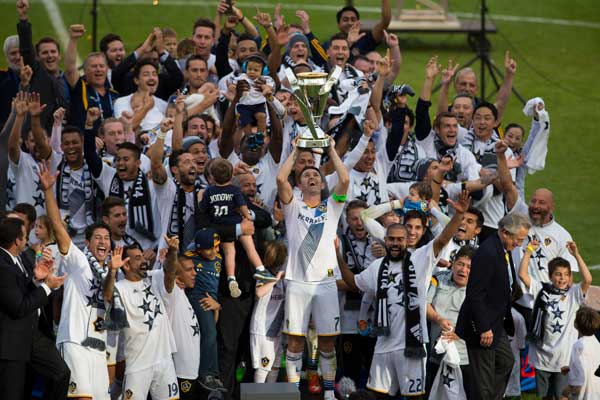 By Clemente Lisi – CARSON, CA (Dec 7, 2014) US Soccer Players – Fueled by both talent and emotion, Landon Donovan got his Hollywood ending on Sunday when the LA Galaxy won its fifth MLS Cup title, defeating the New England Revolution 2-1 in overtime at a sundrenched StubHub Center before a sellout crowd of 27,000.

In a championship game-turned-farewell match for Donovan, the home fans cheered his every touch of the ball for 120 minutes. Despite the second half of the season dominated by the storyline of Donovan’s retirement, the Galaxy avoided all distractions and found a way to win what was a hard-fought contest. The victory, via a goal from league MVP Robbie Keane, helped give Donovan a sixth MLS Cup, more than any other player in history.

The Galaxy also made history, becoming the first club in league history to win five titles. The original North American Soccer League had the New York Cosmos, a franchise known around the world for its talent and titles. MLS now has the Galaxy, a universe apart from the league’s other clubs.

“I am honored to have been part of this club,” said Donovan. “I am very blessed. … I am happy to say we are the first to five (championships).”

With yet another season complete, here is my annual take on five things that stuck out most:

You can’t talk about the 2014 MLS season without mentioning the World Cup. Both help boost the popularity of the sport in this country. We don’t know, however, how much of a long-term impact the World Cup has on MLS. It certainly didn’t hurt that the USMNT was loaded with MLS talent and that the World Cup, for the first time it seemed, was a topic of conversation among even non-sports fans in this country.

Americans based in Europe came back to MLS, sparking debate between USMNT coach Jurgen Klinsmann and MLS Commissioner Don Garber. MLS attendance was up slightly, but TV ratings continued to remain small. Donovan’s exclusion from the World Cup and his decision to retire was the biggest storyline of the year. As a result, people talked about MLS – and soccer in general – and that’s a good thing.

Only three teams have ever repeated as MLS champion, so it was very unlikely that Sporting Kansas City would win the title again this fall. The team struggled for much of the season and had to deal with the absence of Matt Besler and Graham Zusi (both on World Cup duty with the USA) during a stretch of the summer. A congested schedule that included the CONCACAF Champions League also didn’t help.

With teams in the Eastern Conference, such as the Revolution and DC United improving, Sporting KC struggled to keep up despite making the playoffs, where the New York Red Bulls eliminated them. Even the high-pressure game that Kansas City employed to win MLS Cup ’13 seemed ineffective this season. Coach Peter Vermes has found ways to rebuild in the past. Look for him to once again be the architect of a renewed team come next season.

DC United had an incredible season. The team went from worst (overall) in 2013 to first in the Eastern Conference. The team retained Ben Olsen (who won Coach of the Year honors) and little else. The acquisition of striker Eddie Johnson propelled the attack, finding a home after somewhat of a journeyman career that had him playing for eight clubs since he turned pro at 17. DC also relied on Bill Hamid to keep opponents off the scoreboard, earning him Goalkeeper of the Year honors as a result.

The team had a busy season – even surviving the first round of the CONCACAF Champions League – but ultimately could not survive the rigors of the playoffs, falling to rival New York. For DC United, the next big thing is playing in the knockout round of the Champions League quarterfinals against Costa Rica’s Alajuelense. And on the horizon is a new home, a soccer-specific stadium befitting a great team. A few hurdles remain, but the team’s best years look to be ahead of them.

Out with the old, in with the new

Chivas USA finally went away, an experiment that was a complete failure both on and off the field. The Los Angeles market will get a second team (LAFC in 2017). In the short-term, MLS prepares to welcome two expansion teams in 2015: NYCFC and Orlando. A second team in New York will create a derby with the Red Bulls, while Florida finally gets a shot at pro soccer for the first time since the Tampa Bay Mutiny and Miami Fusion folded in 2002.

Next season, the league will increase to 21 teams – something no one would have predicted 12 years ago when the league contracted. It will be interesting to see how these two new teams fare. NYCFC already has 12,000 season-ticket holders and financial backing from Manchester City and the New York Yankees. Orlando, meanwhile, has an already-made fan base, boasting one of the largest Hispanic markets in the country as MLS aims to grow to 24 teams by the end of the decade.

No treble for Seattle

The Seattle Sounders had a 20-10-4 regular season record, won the Supporters’ Shield for the first time as well as captured the US Open Cup for the fourth time in six years. Those victories gave Clint Dempsey his first-ever trophies as a professional and highlighted the greatness of defender Chad Marshall. Once again, Seattle boasted the best attendance in the league, with an average of nearly 44,000.

The home crowd wasn’t enough as the chance to win the domestic treble ended on the cold Century Link pitch. The Sounders had defeated the Galaxy on the final weekend of the regular season to win the Supporters’ Shield, but lost to them when it mattered most in the Western Conference Finals.

Wait ‘till next season. It’s only nine weeks away!