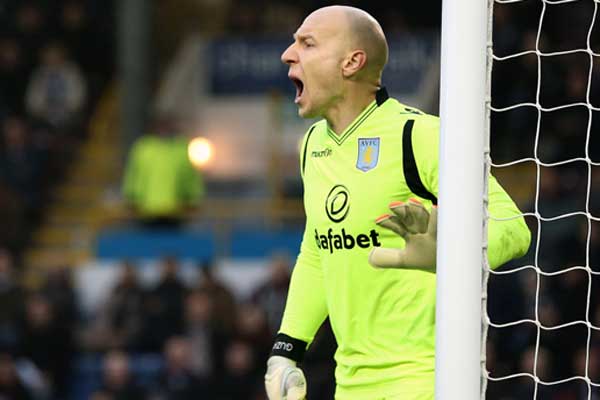 By J Hutcherson – WASHINGTON, DC (Dec 2, 2014) US Soccer Players – From 2007-08 through 2009-10, Aston Villa finished three consecutive seasons in 6th-place in the Premier League. That run of form under manager Martin O’Neill returned Aston Villa to where they’d been in the mid 90s. A team capable of competing for a UEFA Cup place each season.

O’Neill left shortly before the start of the 2010-11 season. Villa replaced him with Gerard Houllier, who left at the end of the season with the club finishing 9th. Alex McLeish took the manager’s job for the 2011-12 season. Villa dropped to 16th and the club fired McLeish. Paul Lambert got the Villa job in the summer of 2012, finishing 15th in back-to-back seasons. It’s Lambert’s job to salvage this season with Aston Villa currently 16th, two points from the bottom of the table.

All isn’t lost at Villa. Two points from bottom isn’t flattering, but they have the same points total as the two clubs ahead of them. Send that two points difference between Villa and the relegation zone in the other direction, and they’d be tied on points for 12th-place. The potential is there, even with the third-worst goal difference in the Premier League.

“We should have won it. We should have been out of the sight in the first half to be honest. With the chances in the first half, we should have put the game to bed. The way we played for long spells of that game was really good. We should have killed the game off. We had chances to do it. Burnley came into it to their credit when they got the penalty and it puts you on the back foot. We lost two points. We could have lost three towards the end when Burnley hit the post.” Aston Villa manager Paul Lambert.

Villa play Crystal Palace on Tuesday after drawing 1-1 with Burnley on Saturday. In between, assistant coach Roy Keane quit the club. Keane chose his other assistant coaching job with the Ireland National Team. The tabloid response was typically English, but whatever his reason it points to the broader issues with Aston Villa.

What’s troubling for Villa right now is what’s been the problem since the last run of form under Martin O’Neill. It’s instability. Former Cleveland Browns owner Randy Lerner bought Aston Villa in 2006. He and O’Neill turned the club around. They made it competitive season-to-season, convincing the rest of the Premier League that Villa were a lot like Everton. They might not compete for the title, but they might trump your club for a Europa League spot.

Lerner hasn’t operated Villa at a discount. He put a value on his club competing in the Premier League, and paid it. Though it’s hard to put a firm number on what an owner really spends on a club in the Premier League, Lerner reportedly closed in on $400 million before deciding to put the club up for sale. It’s still available, with Villa now in the position of not operating at a sizeable loss.

That might sound a lot like Financial Fair Play at work, but we’re not there yet. UEFA’s model for club soccer’s fiscal responsibility hasn’t stopped clubs from spending beyond their projected revenue. To win in the Premier League still requires lots of cash. Lerner accepted that and spent accordingly. It’s not a surprise that Villa on a budget aren’t a 6th-place team.

Whether or not somewhere around 15th-place but above the relegation zone is where this version of Aston Villa belong is a different question.

SI.com’s Liviu Bird takes on an interesting question. Are two trophies enough for Seattle to call 2014 a success? They’re not the first MLS club to try to substitute something else for the MLS Cup. There’s a point in arguing that any trophy counts.

Top Drawer Soccer’s Will Parchman is the latest to try to figure out what USMNT coach and technical director Jurgen Klinsmann has in mind for player development.

The Guardian has Chelsea manager Jose Mourinho referring to Financial Fair Play as “a contradiction”. Jonathan Wilson in The National gives his take on why Manchester United is improving under Luis van Gaal. Writing for the New Statesman, Hunter Davies wonders why more British managers and players don’t try to work in Europe.

Fox Soccer’s Leander Schaerlaeckens questions one of the candidates for the Ballon d’Or aka soccer’s MVP award.