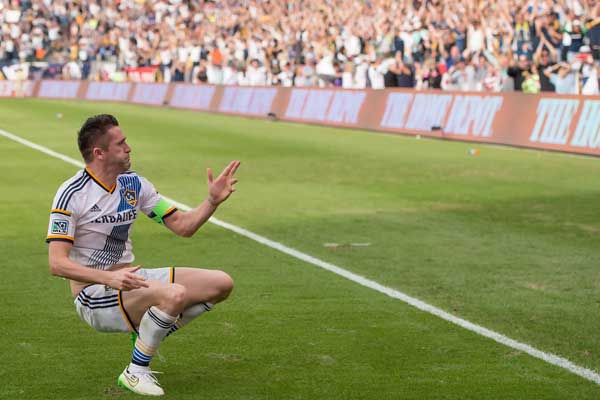 By J Hutcherson – WASHINGTON, DC (Dec 8, 2014) US Soccer Players – At halftime of the 2014 MLS Cup final, commissioner Don Garber stayed on point with the league’s catchphrases. MLS is a league of choice in a soccer nation, and the commissioner makes it tough to forget.

Credit Garber for repetition, repetition, repetition. What’s more in question is the meaning behind those words. The soccer nation concept is nothing new. MLS has been working that line for years now, reminding everybody that professional club soccer has a place in the United States.

When you think about it like that, it’s a different soccer nation than say Spain, where two clubs separate themselves from the rest. It’s not even the German model of a soccer nation, where there’s still one club more likely than not to win. It’s certainly not the English version of a soccer nation. The Premier League version of competition has little to do with the MLS concept of parity.

Right now, MLS isn’t part of the conversation for how soccer will change. UEFA dominates the dialogue, currently reworking the game for club and country whether the rest of the world likes it or not. It’s UEFA enforcing the Financial Fair Play rules, something in theory and in concept that doesn’t apply to the tightwad response to spending we see in MLS. The future of European club soccer isn’t MLS’s response to spending on players. If anything, it’s a version of what Arsenal has been doing over the last few seasons.

In other words, it’s a different conversation that the mostly internal talk we get from MLS. There’s no reason that anything Financial Fair Play does or doesn’t accomplish in Europe will apply to MLS. European soccer giants might be looking stateside for how to market their teams and for sports business best practices, but more often than not they’re looking at the big American leagues playing different sports. MLS and the clubs most likely to compete in the Champions League aren’t a like-for-like comparison.

We know that already. Pretending that’s somehow a slight against MLS is silly. Those foreign clubs spend more to attract both players and fans. It’s a different take of the game. It’s why the giants of Europe are the clubs of choice and the Premier League is the current league of choice.

How MLS inserts itself into that conversation first requires becoming a true alternative to the top clubs in Europe. Without fundamental change in what we currently know about European club soccer, that’s going to require the same thing it did when the planners of what turned into MLS first latched onto single-entity as a concept. Spending competitively to make MLS teams an alternative without a financial penalty.

MLS can point to doing that for a handful of elite players, but so can other leagues around the world. Does that make those circuits leagues of choice as well? If being a league of choice really does mean one among many, how is that different than the MLS that signed David Beckham, Thierry Henry, or Robbie Keane?

As Garber sticks to the script with his public comments, it’s probably worth noticing that even the commentators on league broadcasts are asking questions. If the league wants to float these concepts, they have to be ready with better answers. Otherwise, we’re only dealing with talking points that can be easily adjusted or abandoned.

The LA Times’ Bill Plaschke on the LA Galaxy’s MLS Cup title and Landon Donovan’s farewell that made the front page of the paper. USA Today’s take on Donovan’s finale from Martin Rogers. MLSsoccer.com’s David L’Heureux talks to other members of the Galaxy about Donovan’s career.

The Boston Globe’s Frank Dell’Apa on the New England Revolution’s loss on a sports page overshadowed by Robert Kraft’s NFL team. SI.com’s Liviu Bird explains how New England picked up their game during the final. Bobby McMahon picks five highs and five lows from the 2014 MLS Cup final in an article for Forbes. Goal.com’s Seth Vertelney asks what it means for the Revolution that this is their fifth MLS Cup loss.

The City Football Academy is preparing to open its doors… #WelcometoCFA pic.twitter.com/H7gd0BgOX0

The Guardian’s Jamie Jackson explains what Manchester City’s amazing new training facility should mean for developing players. The Telegraph’s Jonathan Liew has the story of the rivalry between Manchester United manager Luis van Gaal and his Southampton counterpart Ronald Koeman.