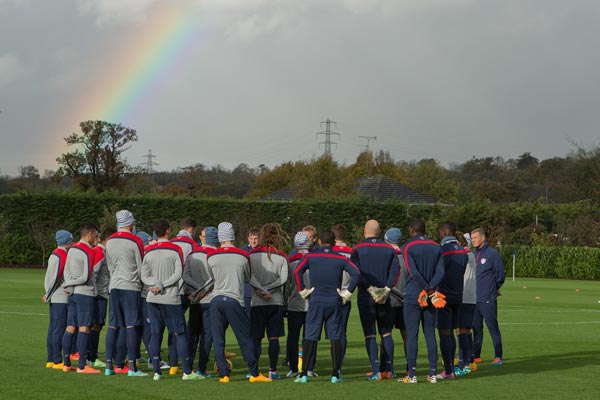 By Jason Davis – WASHINGTON, DC (Dec 31, 2014) US Soccer Players – American soccer’s relationship with hype is very much like America’s relationship with soccer. It’s complicated. Complicated in ways that defy easy explanation. Complicated in ways that fold back in on each other to create a dense knot of complication that precludes anyone on the inside from having the perspective needed to identify the problem.

That is, if there is a problem to identify. Within the constricting soccer bubble, it seems that every teenage phenom on the rolls at a big club is the potential “savior” of the USMNT. Lineups are filled out years in advance, on the presumption that a talented youngster is certain to meet every ounce of his potential. He was signed by a big club with smart scouts, after all. The future is always as bright as it can possibly be, as long as we ignore the intervening years and the many annoying realities they present.

If American soccer (which is not monolithic, but is for the sake of this discussion) hasn’t matured at all over the last thirty years, the search for the soccer prodigy is part of the problem. Our history of player development is a pockmarked wasteland of failure and disappointment. That’s in part because of the expectations placed on teenagers by a marginalized fan base anxious to final the single player who will:  A) lead our national team to World Cup glory and B) raise the level of American players in the minds of Europeans who look down on our efforts to play “their” sport. Make no mistake, the rise of an exciting talent, particularly abroad, is as much about the perception of American soccer as it is about what said player might contribute while wearing Nike’s latest USMNT jersey design.

Before we can address the issue of American soccer’s tendency towards hype, much less its latent savior complex, we should consider whether the size of the community is even large enough to have the sort of detrimental impact which its accused of affecting. Remember, this is a sport that existed on the margins of the margins as little as two decades ago. Even when the whole of the country found itself swept up in the soccer mania of 1994, the focus on the future stars of the USMNT was minimal at best. No American soccer prodigy received even half of the adulation and expectation as three-star recruits to middling college football schools.

There are notable exceptions, ones that turn the premise that “American soccer” isn’t big enough to matter on its head. But those exceptions quite often ranged well outside of the established fan base, drifting into areas more aptly called “pop culture.” Should we castigate American soccer for the sins of the corporate vultures who attempted to exploit players who weren’t ready for prime time? Even if the soccer public was complicate, it’s difficult to say that those fans drove the train.

If American soccer is guilty of crowning players before they’re ready, it bears asking if the players who failed to measure up to the hype were ever equipped to reach those heights in the first place. Additionally, if players who get the spotlight before they’ve done anything to deserve it then stop working towards their ultimate goal, does the blame lie with the excitable fans/media, or with the player himself?

There’s a tenuous causality between the hype machine and players underwhelming as professionals. It’s impossible to account for individual personalities, and questionable to assume that young players wouldn’t succumb to immaturity if only the fans didn’t get excited about their potential. The difference in “hype” and “pressure”, one of which we treat as poisonous and one we imagine to be the great deliverer of top players, is a matter of how a player processes attention. Both are rife with expectations. It how the individual handles those expectations that ultimately will determine how good he turns out to be.

While the USMNT head coach is consistent with his refrain that young American players need pressure to grow, the other side of that same coin is the hype he bemoans. American soccer, now a bigger movement than ever before and subject to the problems that come with rampant fanaticism, exhibits excitement as a default. That’s because the base condition of the USMNT is aspirational. It’s much easier to reign in the hype when you’ve been to the top before. Still, even the best soccer nations in the world aren’t immune to the phenomenon. For every Neymar, Brazil has three Kerlons who no one remembers.

American soccer already knows enough to push back against the hype. The lessons of the past are still raw. This results in that complicated relationship with any notion of over-excitement, where half the community is ready to cheer while the other half wags their fingers admonishment. In the end, neither side comes off looking very good.

From the inside, American soccer is spoiling its best youth players with heaping helpings of hype and the ego-inflating adulation they’ve done very little to earn. From the outside of the bubble, it’s quite possible that the American soccer version of hype would even raise any eyebrows.