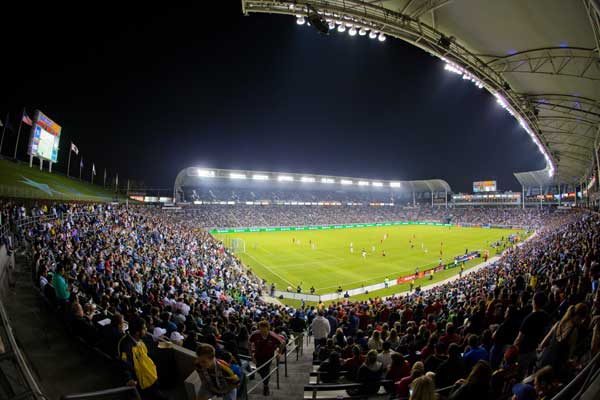 By J Hutcherson – WASHINGTON, DC (Dec 9, 2014) US Soccer Players – Almost immediately following the LA Galaxy‘s extra time win in the 2014 MLS Cup, Real Salt Lakeput out a press release. They were celebrating qualifying for the 2015-16 CONCACAF Champions League, taking the spot that would’ve otherwise gone to the New England Revolution.

It’s a return to the Champions League for the club that made it a priority in 2010-11. Real Salt Lake made the final that year, losing to Liga MX club Monterrey. That tournament was also an early indication of what’s fundamentally wrong with the competition.

CONCACAF is a confederation, one where all the representative federations and associations are equal. Though that doesn’t mean putting clubs from the smaller leagues directly into the group stage, it also doesn’t mean cutting them out entirely. Answering that problem is difficult. So is avoiding a tournament where a Liga MX club always wins.

Real Salt Lake became the first MLS club to make the CONCACAF Champions League final because they were the first MLS club not to have to play a Liga MX club in the knockout rounds. CONCACAF spilt Liga MX away from the other leagues that season. Half of the bracket was entirely Liga MX teams. Real Salt Lake advanced by beating Columbus and Saprissa before losing over two legs to Monterrey. That was a one-off scenario, with Liga MX teams regularly playing each other for the CONCACAF Champions League title.

At the time, that raised familiar questions about the Champions League and CONCACAF’s design for the tournament. Whether or not a given fan base really cares is hit or miss. Some do, at a level that suggests this tournament has a strong future as the prestige club competition in the region. Others don’t. Unfortunately for CONCACAF that normally includes the clubs from Liga MX. Winning the CONCACAF Champions League means playing in the FIFA Club World Cup, but that’s a questionable reward in Liga MX.

During last week’s State of the League, MLS commissioner Don Garber mentioned SuperLiga in passing as an idea ahead of its time. The problem with SuperLiga in its time was that the participants were all mid-tier MLS and Liga MX teams, playing games as their schedules allowed. There’s not a huge push for midweek international club soccer involving MLS teams then or now. The most memorable moment from the SuperLiga was an all-MLS final.

Garber wasn’t talking about SuperLiga as it was. Instead, he was making a point about what it could be. It’s no surprise that there are now rumors of a plan that might already be in place for an MLS vs Liga MX competition, one that may bypass the CONCACAF Champions League entirely.

In a lot of ways, all this does is connect the dots. However, it’s worth remembering one of the problems with SuperLiga and the CONACAF Champions League. Given a choice, most Liga MX teams would take one of the spots in the Copa Libertadores. CONCACAF forces Liga MX winners to participate in the Champions League.

A Liga MX vs MLS competition regardless of how its structured wouldn’t have the same mandate. Without that, we’re right back to the original problem facing all of these tournaments. It’s tough to force clubs to care, much less convince local fans that another riff on an old idea is now worth their time.

Congrats, @landondonovan! Retiring from the game in style with another #MLSCup win. Make sure to come visit us soon! #ThanksLD

BBC Sport has the story of whether or not tactics and coaching methods work across sports with Bayern Munich coach Pep Guardiola advising Japan rugby.

The Independent’s Jack Pitt-Brooke has Arsene Wenger facing familiar criticism while the Arsenal manager tries to move the conversation away from every distinct result.

ESPN FC’s Rory Smith makes the case for encouraging entertaining players in pro soccer. The 70s are normally associated with the era of the flare player, and he has a point that it could help add an aspect the contemporary game misses. Staying with the entertainment aspect of the game, the Telegraph’s Jonathan Liew has Luis van Gaal vs Gary Neville.