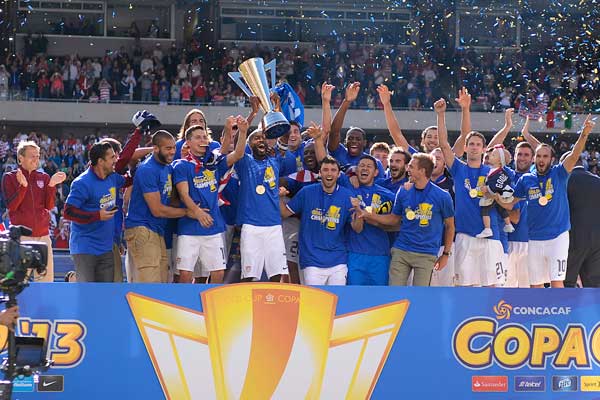 By Jason Davis – WASHINGTON, DC (Dec 12, 2014) US Soccer Players – The media release for the USMNT schedule for the first six months of 2015 calls the run of games “ambitious.” It certainly is that. You might even argue that’s underselling it a bit.

The schedule includes seven games, five of them away, with all of them against quality opponents. The USMNT opens against Chile, in Chile, where La Roja will host the 2015 edition of the Copa America. Chile can’t afford to treat any game lightly in their preparations.

Away dates against Denmark and Switzerland come at the end of March. The final three matches on the list are against Mexico, the Netherlands, and Germany. Both of the games against the European giants will take place on their turf, and come just five days apart.

They’re friendlies, but as friendlies go, these games will present a significant challenge. USMNT coach Jurgen Klinsmann clearly has no interest in building slowly to next summer’s Gold Cup. No interest in fostering confidence by taking on second-tier teams the Americans should beat.

With the number of games set to take place outside of the United States, it’s also clear Klinsmann values putting his players in hostile environments. We can throw the Mexico friendly in that group as well, since it will likely take place in a large venue filled with fans of El Tri.  Klinsmann will once again put his team under pressure. It’s win-win.

On the face of it, what Klinsmann and US Soccer are doing with the 2015 schedule is admirable. Part of Klinsmann’s mandate as head coach, and now technical director, is to push the USMNT program beyond its generally accepted place in the world soccer hierarchy. Doing so is impossible if the Americans continue to play the usual suspects, with a “name” team thrown in, year after year. Outside of a home date with Panama at the Stub Hub Center in early February, every game on the schedule so far in 2015 is meant to raise the stakes for the team and the players.

However, Klinsmann is also responsible for getting his side ready to play in a Gold Cup tournament that could lock down a spot in the 2017 Confederations Cup for the United States. This is the Gold Cup year where every nation brings their best possible team. That puts extra emphasis on the friendlies that the Americans will use to get ready.

Regardless of the relative strength of the sides not wearing Mexico shirts, the US will be a favorite in most matches. What that typically means is the impetus to attack with possession will fall to the Americans, as lesser teams sit back and play the counter.

In the Gold Cup, Klinsmann’s team probably won’t find themselves on the wrong side of the possession battle until the tail end of the tournament, if at all. The struggle isn’t in how to play toe-to-toe with a strong opponent (as it was in the World Cup), it’s in putting a weaker team to the sword. The United States has not always handled the dominant position as adeptly as they should. The development of the team under Klinsmann has shown occasional flashes, but it’s hard to know if the USMNT is entirely comfortable having the ball ceded to them.

That’s only true, however, if Klinsmann decides to take the trips to South America and Europe and use them as a means to push the team forward. Doing their own version of sitting back and countering does the Americans no good if the goal is to change the way the team plays.

The disconnect between Klinsmann’s message and his method was never more starkly visible than at the World Cup. Yet, he gets credit for getting his team out an extremely difficult group by whatever means necessary.

If they’re going to avoid a repeat of their performance in Brazil in terms of posture, playing good teams and refusing to concede the possession battle is imperative. Simply putting the team into uncomfortable situations is experience they’ll need. Perhaps not this summer, but certainly in a future that includes chaotic CONCACAF road qualifiers, a Copa America in 2016, a possible Confederations Cup, and the World Cup in Russia in three and a half years’ time.

Like every coach, Klinsmann wants to win. Unlike many coaches, Klinsmann is willing to put his team in a position to lose it will help them get better. Credit is due to him there, as well. Few coaches would be willing to risk looking bad for a plan that extends beyond the next competitive match.

Klinsmann’s contract extension and the faith placed in him by US Soccer president Sunil Gulati gives Klinsmann the freedom to schedule two home matches in six months while taking on some of the best teams in the world away from home. Klinsmann’s belief in his program and himself gives him the guts to think that playing the best teams in the world is the only way to turn the United States into the world power he believe it can be.