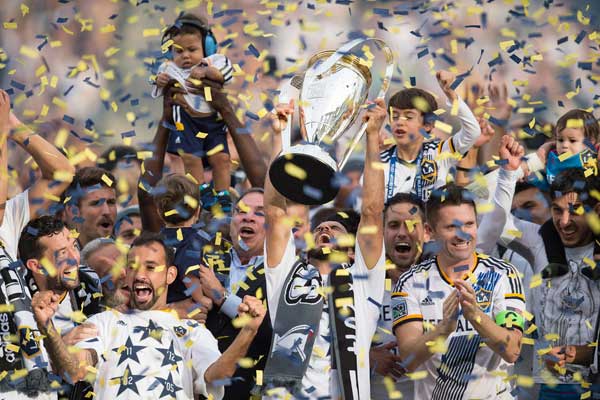 By Clemente Lisi – CARSON, CA (Dec 8, 2014) US Soccer Players – Only a player of Landon Donovan‘s magnitude could get two farewell games in one season. So was the case for a player who achieved so much for both club and country. After a celebration in October when he earned his final cap for the USMNT in a friendly against Ecuador, Donovan was the center of attention once again when the LA Galaxy defeated the New England Revolution to win the 2014 MLS Cup.

In a week dominated by statements about how much MLS and its fans would miss the 32-year-old midfielder, Donovan looked more relieved than sad on Sunday afternoon. While his teammates celebrated with the trophy, Donovan took one last lap around the field at StubHub Center – taking it all in one final time – as the fans cheered and chanted his name. Long after most of his Galaxy teammates had exited their champagne-soaked dressing room, Donovan lingered, hugging the many Galaxy employees who had now become a second family.

“It was very emotional,” Donovan said of the 2-1 victory that earned him a league-leading sixth MLS Cup title. “I’m very tired, but very happy for the way it ended.”

It seemed that an entire career had come down to one game. Even the aches and pains didn’t seem so bad once Donovan got to hoist the trophy one more time.

“I am very, very happy,” Donovan repeated. “For me, it was the perfect ending.”

It may have been a perfect finish, if not always perfect to watch. The Galaxy looked sloppy at times, its defense failed to properly clear balls and Donovan and Robbie Keane, who scored the game-winner in overtime, didn’t connect like they had all season.

That mattered little. Donovan went out a champion. When he made his retirement announcement in August that was the goal.

Now that the fans have gone home and the confetti cleaned up, the big question is what to make of Donovan’s legacy. Donovan didn’t want to talk about it, saying it’s for others to debate.

There is, however, little room for debate when it comes to how great he was on the field. A large part of it has been his ability to help MLS grow over the course of his 13 seasons. His growth as a player and his place as one of the best in American soccer mirrored the growth and success of MLS, a league he joined in 2001. Donovan played his first four seasons with the San Jose Earthquakes, winning two titles there, before signing with the Galaxy in 2005.

In 2001, Donovan was 20, a budding player trying to make it as a pro. Donovan had showed his amazing abilities at the 1999 FIFA U-17 World Championship, where he won the Golden Ball as the tournament’s MVP. Donovan was a player bursting with potential. Likewise, MLS was a league struggling to make it in a country dominated by other team sports. Although MLS was low on cash and investors, it also had potential. Its future, like that of Donovan’s, seemed uncertain.

Donovan made MLS his home, both seemingly dependent on each other. Donovan led San Jose to two MLS Cup titles, in 2001 and 2003, and earned a place on the National Team that reached the quarterfinals at the 2002 World Cup. Donovan would go on to play at two more World Cups (in 2006 and 2010) as well as become the USMNT’s all-time leader in goals and assists.

Galaxy coach Bruce Arena, who also managed Donovan at the 2002 and 2006 World Cups, said, “I think Landon is on everyone’s list of top five best American players all time.”

Donovan’s move to Los Angeles would eventually help cement the Galaxy as one of the best teams in MLS history. He helped the Galaxy win back-to-back championships in 2011 and 2012. He played alongside David Beckham and Robbie Keane, a trio who raised the league’s global profile. While MLS continued to grow, Donovan kept breaking records to become the all-time leader in goals and assists. He is arguably the best player ever to play in MLS. That’s saying a lot for a league with alumni like Beckham and Thierry Henry.

Originally, the MLS mandate was to help this country develop and nurture talent. That was true of Donovan.

“He has been unbelievable for American soccer,” Keane said. “Both this league and soccer have grown so much. A lot of the credit for that goes to players like Landon.”