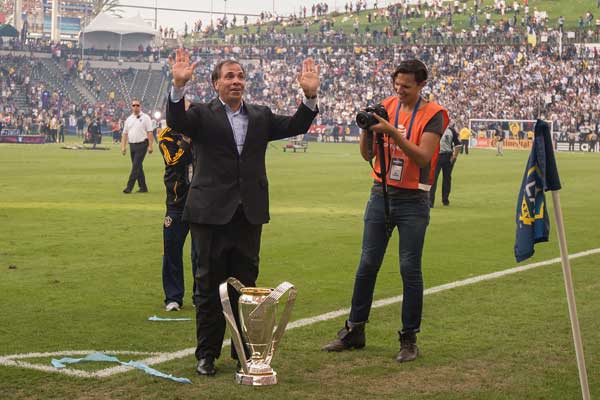 By Jason Davis – WASHINGTON, DC (Dec 9, 2014) US Soccer Players – We’ve all heard it before, but on the occasion of the biggest game in MLS it bears repeating. Los Angeles is a universe unto itself. It’s a place where how you look is paramount, getting anywhere on time is uncool, and sports are subject to both phenomenon. The 2014 MLS Cup checked all of the LA boxes.

That doesn’t mean there aren’t plenty of fully committed diehard sports fans among the denizens of the greater Los Angeles area. It just means they’re probably a little more laid back their their counterparts in other parts of the country. It certainly means that the atmosphere for the MLS Cup final fell somewhere between “swap meet” and “company picnic.”

It takes only a single visit to LA – particularly if you’re flying in from somewhere damp and cold – to understand why the LA chill-out mentality bleeds into sports. The day of the MLS Cup delivered stunningly perfect weather. 75 degrees, ample sunshine, and a light breeze that warded off the chance of breaking into a sweat. The weather was so good, in fact, that it seemed a shame the final soccer match of the American season kicked off at noon. A later start time meant more sunshine for everyone.

Despite the perfect conditions, the game itself was sloppy, hectic, and underwhelming. Playoffs are fine, whatever issues there are with the MLS version, but they do sometimes make for disappointing finals. All of the buildup, following a pressure-packed run through a gauntlet of two-legged series, fails to bring about a satisfactory end in a one-off game that must provide a winner. Neither the Galaxy nor the Revolution seemed like they were ready to perform when it mattered most.

Maybe it was the weather, or the low-key crowd. We often talk about vibrant, passionate supporters pushing on their clubs. Those fans providing the backdrop for high stakes battles that bring out the best in players and teams. Why wouldn’t that dynamic work in the negative?

Again – and it’s important to say this because while it’s easy to slap labels on the overarching culture and miss the wealth of variation – LA is also home a group of rowdy and engaged fans who did everything they could to ramp up the intensity on Sunday afternoon. Both the Angel City Brigade and the LA Riots Squad put forth their best efforts in a stadium packed with a slew of casual fans. Without those groups, and the efforts of a small band of traveling Revolution fans, the atmosphere at the Stub Hub Center wouldn’t have reached the somewhat muted level it did.

Maybe LA soccer fans are starting to take championships for granted. The Galaxy not only lifted their fifth MLS Cup trophy, a record they now hold all by themselves, they also won their third title in four seasons. Bruce Arena and the LA front office have reached the highest level possible in a league meant to tamp down single-club dominance. It’s probably no coincidence that the man in charge of an earlier DC United dynasty is the same man who plods up and down the sidelines as the boss of the Galaxy.

Whatever peculiar effect the lifestyle of Los Angeles has on its sports crowd actually seems to have been good for Arena. Close observers of the team talk about the coaching legend’s more relaxed state of mind in Southern California, where he not only gets to enjoy the same beautiful weather conditions as everyone else, but can also dote on his grandson. Arena’s son Kenny is now an assistant with the Galaxy and lives in the area. Being a grandpa, on the laid back, sun-drenched Pacific coach, appears to agree with the notoriously gruff Arena.

Arena’s Brooklyn upbringing still manages to seep out from time to time. He’s still not holding back when given the chance to express an opinion or play the contrarian. In a team with so many personalities developing both physically and mentally, it seems Arena has developed, too. Kinder and gentler, but still with the shiny veneer of success.

LA just does it differently. The StubHub Center doesn’t present the raucous cacophony of tight and turned up Sporting Park, the overwhelming, coordinated din of echoing CenturyLink Field, or the sing-song, European-like ambiance of Providence Park. What it does present it one flavor of the vast array of flavors that exist in the American soccer milieu.

It might not be everyone’s favorite flavor. Then again, for those from LA who watched their team win yet another MLS Cup title on Sunday, it tastes just right.