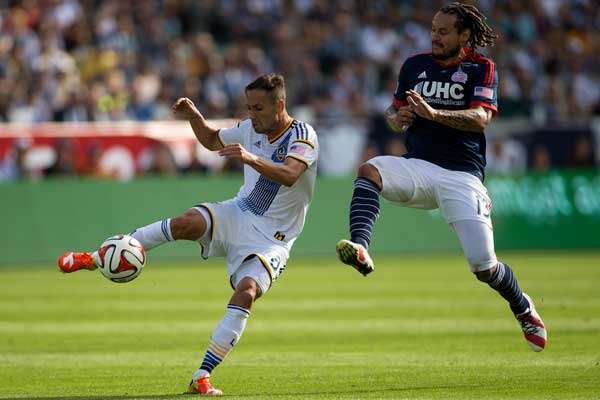 By Charles Boehm – CARSON, CA (Dec 8, 2014) US Soccer Players – A debate rumbles on about the merits of MLS vs European leagues for talented American players seeking to elevate their games and earn a shot with the USMNT.

The input of major figures like USMNT coach Jurgen Klinsmann and MLS commissioner Don Garber has recently cast a brighter spotlight on the topic. The discussion revolves around the importance of each player finding personal development – and ideally, ample playing time – in the most demanding environment possible.

Jermaine Jones is one of the few national teamers whose departure from Europe was reportedly encouraged by Klinsmann. And while it seemed to some that his summer signing with MLS was evidence of the inconsistency of Klinsmann’s outlook – or perhaps the coach’s conclusion that Jones’ career had peaked – his performance here tells a different story. Jones’s enormous impact in just 15 games with the New England Revolution suggests that valuable lessons can and should be carried westward across the Atlantic.

“It was palpable. You could feel it. Once Jermaine walked into the locker room, right away you could feel it,” Revs head coach Jay Heaps told the media in the run up to Sunday’s MLS Cup matchup vs. the LA Galaxy, speaking enthusiastically of the intensity and “swagger” Jones brought to his team.

“He had just come off an unbelievable World Cup, and also what we’ve seen in his career was simply amazing. But when he walked in you could tell right away how engaged with the players in the locker room, just how he connected from that first practice. We as coaches can say [to other players], ‘Hey, you’re great.’ But it doesn’t mean anything until someone like Jermaine steps on the field and says, this is how you do it. This is how we’re going to do it.”

Clearly, Jones is an elite midfield talent with enormous experience in Europe’s top leagues. But it’s the less obvious traits he brings to New England – and by extension, the entirety of MLS – that may provide just as much of a legacy.

On Friday, Jones spoke specifically of the one and only loss suffered by the Revs from the day of his arrival to Sunday’s heartbreaking MLS Cup loss to LA: a 1-0 road defeat to the Columbus Crew on Sep 20. While many MLS pros would shake their heads and move on to the next match, Jones turned it into a watershed moment that might just have sown the seeds for their run to the title game.

“We have so young a team and after that Columbus game where we lost, the whole team in the locker room was talking and we said, ‘Guys when we want to come to that final we have to switch and we have to change and everybody has to be focused,’” said Jones. “And to see that everybody put that hard work in that we made that [playoffs] win against a good New York team at home and make it happen to come to the final. That makes me a little bit proud, too.

“All the guys have so much talent and I always say that, but the good point is that this is like a small family,” he added. “The guys, they’re not going ‘Why are you talking like that’ or something. Everybody help each other and that’s the point, why we step on Sunday on the pitch.”

No one in Revs colors hesitates to acknowledge the injection of class, ferocity and purpose the USMNT standout brought to their locker room, even as he commuted cross-country from his family’s permanent home in Los Angeles. They’re important qualities that, for the moment, remain doggedly difficult to manufacture domestically.

“He doesn’t like to lose – whether it’s 5v2, being in the middle, or in the final game,” second-year New England defender Andrew Farrell told USSoccerPlayers.com. “He’s made everybody a lot better, made me better. I think I can talk for all the young guys – he’s talked to all the young guys and we’ve grown so much within the past three, four months that he’s been here. He’s been a huge addition to us, on and off the field as well, with more [fan] following. It’s been a great acquisition.”

Even after the pain of Sunday’s extra time defeat, Jones sounded as much like a frustrated teacher as a disheartened player.

“It was a goal we always give up. It was a normal long ball. It was nothing special that they are killing four or three people,” a subdued Jones said Robbie Keane scored the game-winning goal to secure the cup for LA in the dying moments on Sunday. “They hit the ball long, and the ball dropped in the back. Keane can run one-on-one [at] the goalkeeper. It’s not only today. It is always. The last games, we were lucky that we can fix it.”

While Jones is a soft-spoken man who rarely seeks the media spotlight, he does not shy away from uncomfortable truths – the very kind that everyone associated with MLS will have to face up to in the months and years ahead.

“[Compared] to Germany or England, I would say that it’s still a big difference. The league has to grow,” he said when asked to give his thoughts after his first season stateside. “It’s growing every year, it’s a good league and you see that there’s a lot of talent. When you see today that game, I hope that not only a final is so packed – that every game, for every team, gets that support, home or away games. That’s what everybody wants.”