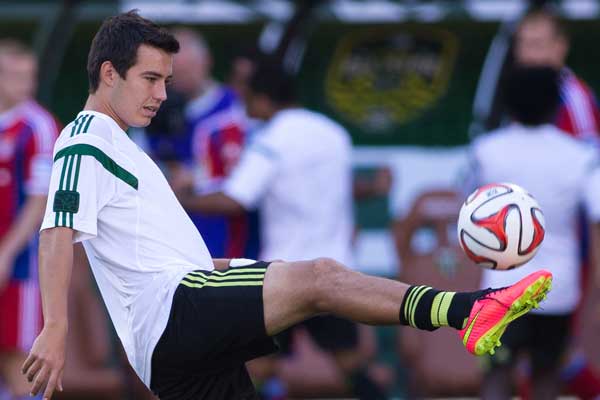 By Jason Davis – WASHINGTON, DC (Dec 19, 2014) US Soccer Players – No matter what happens for the rest of the winter, the 2015 MLS season will open with two loans dominating much of discussion. Not loans into the league, however. No, the two loans most talked about in American soccer circles com March will be two loans away from MLS. Despite the similarity in the terminology and paperwork, the two loans tell different stories

When New York City FC signed Frank Lampard, they did everything they could to frame the move as anything but a semi-retirement for the Chelsea legend. Like many big name European stars before him, Lampard’s jump across the Atlantic was both a coup for MLS and a potential sore spot. There’s always the risk that an international signing might not take the league as seriously as it takes itself.

The club did a reasonable enough job, and Lampard said most of the right things. Unfortunately, because NYCFC wasn’t set to start play until next year, Lampard needed some way to stay sharp for his Big Apple debut. Shared ownership made his loan to Manchester City, a club fighting on multiple fronts in need of quality midfielders, a no-brainer. It also set the stage for a showdown over the length of his loan, one that almost has to favor the bigger team in the bigger league.

The latest reports have Lampard wanting to extend his stay in England, possibly until the end of the Premier League season. That would not be good for NYCFC, who could be without their designated player for a large portion of the MLS campaign. Because of the nature of the relationship between Man City and New York City, it’s difficult to imagine the American team will win any tug-of-war over Lampard. Fans of the new club should be prepared to watch the team play without him.

It’s not just NYCFC that will look like the weak sister here, but MLS. Lampard may not be semi-retired (good), but that now means he won’t be starting with his new team in their first season (bad).

Meanwhile, the Erick ‘Cubo’ Torres drama now has a half-resolution. After lighting up MLS with now-defunct Chivas USA in 2014, Torres’ future came into doubt thanks to the nature of his loan to MLS from Chivas de Guadalajara. The league faced a decision: buy the young Mexican star, as was their option, or lose him back to Guadalajara. Considering the league’s consistent efforts to capture the imaginations of Hispanic soccer fans, keeping Torres here seemed the prudent move.

But with a deadline of December 15th, and no clear mechanism for allocating Torres to a new team now that Chivas USA was no more, the choice wasn’t as straight forward as it seemed. This being MLS, Torres couldn’t simply go to the highest bidder. And lest we forget, the player usually has some say in this matters, even if it seems his contract is available for purchase by virtue of a clause somewhere in the text.

The solution, if that’s what we should call it, came Thursday through an official announcement by Chivas de Guadalajara. Torres would return to Guadalajara for the first six months of 2015, where he would attempt to help the Goats avoid a disastrous relegation to the second division, then join MLS in the summer as property of the league. MLS did in fact exercise their purchase option, but chose to loan Torres back to the Mexican club for the 2014 Liga MX Clausura. More than likely, the deal is a compromise. Though MLS held the unilateral purchase option on Torres, it’s not in their best interest to annoy a club the size of Guadalajara during such a high profile deal.

There are risks for MLS, including the obvious injury concern. Torres could also regress under the pall that seems to affect everything Chivas de Guadalajara does these days. If his value takes a hit, MLS bought a talented young player with an uncertain future rather than a star who can immediately raise the profile of the league with a coveted demographic.

There are also potential benefits, not the least of which is the ongoing question of where Torres will end up come summer. If he plays well enough in Mexico, or perhaps even if he doesn’t, there will be a line of MLS clubs anxious to grab a bit of scoring help during the dog days of a long, exhausting season. The conversation around Torres will be mostly positive, his arrival back in the league a hotly discussed issue. For MLS, which often struggles with storylines worth talking about during downtime between matches, Torres is a near-guaranteed bit of intrigue to throw into the midst of the regular season.

Two loans. One with the potential to cast MLS as the weak sister in a battle for the services of an aging, but still effective midfielder. Another that will drop a rising scoring talent into the middle of the season, just when MLS is often most in need of some added interest.