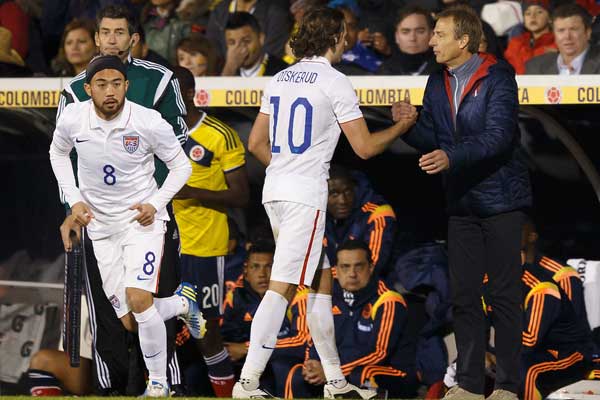 By Clemente Lisi – NEW YORK, NY (Dec 16, 2014) US Soccer Players – A lot has been said about MLS and the USMNT over the past year. Most of that conversation centered on how the two go or don’t go together. With USMNT coach Jurgen Klinsmann and MLS commissioner Don Garber trading jabs about American players returning to MLS, it is worth noting that this year was one in which the USMNT could not live without America’s top domestic league players. Look to the 2014 World Cup as the biggest example.

There was further evidence of this in last Sunday’s MLS Cup Final at StubHub Center between the LA Galaxy and New England Revolution. The game featured six current and former USMNT players combined – all of whom were in the starting lineups. In addition, Galaxy coach Bruce Arena once held the USMNT job and Revs coach Jay Heaps made four appearances for the USMNT as a player.

In some ways, the game also featured a passing of the torch. Out came Landon Donovan, who retired an MLS champion after a rocky year that included not being included on Klinsmann’s 23-man roster that traveled to Brazil for the World Cup. In was Jermaine Jones, the German-American midfielder-turned-sweeper that Klinsmann hopes to build the team around.

Donovan’s retirement creates a void for MLS and the USMNT. Once the league’s poster boy, Donovan was the face of the league as well as American soccer. He popularized the game in this country and was the National Team’s best-known player. At the same time, US Soccer is looking to revamp the way it finds and develops talent – something that will have an impact on the game in this country.

With Donovan no longer playing and the annual January camp on the horizon, here are five other players from MLS Cup Final who could fill those big shoes.

The Revs striker had a wonderful season and could be the forward Klinsmann turns to come 2015. Like other Americans over the past two years, Nguyen came to MLS in 2012 after playing abroad since 2005, most recently in Vietnam. Klinsmann called in Nguyen for the November friendlies – the first time in seven years – proving that you can never really be out of the USMNT picture.

Like Nguyen, Davies had a great 2014 and his best season in MLS since he signed from French side Sochaux. Davies was a USMNT regular in 2009 and one of Bob Bradley’s go-to strikers ahead of the 2010 World Cup. Davies could return to the National Team fold and pairing him up with Nguyen for the USA as well could be interesting to see on the international level.

It was fitting that Zardes scored in what was Donovan’s final game. Zardes, the first Homegrown Player to ever score in a MLS championship game, is uncapped for the USA and has never played for the National Team at any age level. That could change should Klinsmann want to get a closer look at the budding forward. Standing 6-foot-2 and only 23 years old, Zardes combines athleticism and skill to his game.

There is no player in MLS who turned around a team like Jones did this past season with the Revs. The hard-nosed midfielder can play defense, battle for balls in the middle as well as spur the attack all seemingly at the same time. Jones became a household name during the World Cup and is the one player who seems assured to be part of Klinsmann’s lineup going forward.

He may get all attention for coming out as the first openly gay male pro athlete in America, but Rogers is much more than that. As a fullback and winger, Rogers he showed his worth in MLS since coming out of retirement in 2013. Rogers already is a role model. He could see his stock rise even more in 2015.