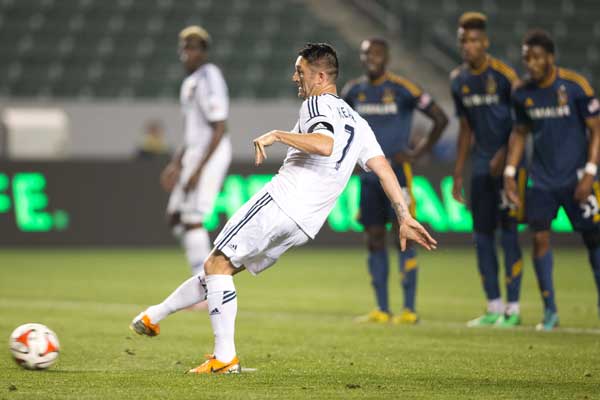 By Tony Edwards – San Jose, CA (Dec 2, 2014) US Soccer Players – During the 2014 State of the League roundtable, MLS commissioner Don Garber announced that MLS will no longer operate a reserve league. Instead, all of its teams will own or affiliate with a USL-Pro team. To understand what this means, let’s take a look at the history of another American sport.

It may come as a surprise to all but the baseball historians in the audience, but there was a time when the Commissioner of Baseball (Kennesaw Mountain Landis) once kind of stuck up for the minor leagues as independent. That is, winning was their main focus, not player development. In reality, staying in business was the main aim).

Landis was arguing against the positions of Branch Rickey and other ‘visionaries’ (the winners have the history books written about them) who wanted to turn minor league baseball into exclusively a player development system. The condensed history lesson concludes by noting that up until the third or fourth decade of the last century, a good many of the minor league baseball teams were independent and winning was one way they enticed locals to attend games.

The other way these teams stayed afloat was, much like today’s world soccer market, selling their best players to bigger clubs. In fact, there were rules in place to encourage minor league teams to sell their better players.

It isn’t often the cliché that ‘we’ve seen it all before’ plays out on this scale, but that’s exactly what we’re looking at with the third division of the American pro soccer pyramid, USL-Pro. Ostensibly, the USL-Pro was a mixture of so-called bigger clubs (like Rochester) who didn’t want to spend the money to join the NASL when it formed, and smaller clubs for which the third division suited their ambition or they owner’s need for a write-off. Some were even faith-based clubs, such as the now-defunct Charlotte Eagles.

The much-ballyhooed agreement with Major League Soccer a few seasons back first meant a number of teams would receive younger MLS players who would get playing time not afforded by the Reserve League or the need to win games. Then, of course, the Los Angeles Galaxy launched the imaginatively titled Galaxy II, and the whole landscape changed.

Now, with the Seattle Sounders, Portland Timbers, and Vancouver Whitecaps all launching USL-Pro sides, and Salt Lake, Toronto, and Montreal joining them, virtually every USL-Pro side is either an MLS farm team or has a player development agreement. According to one chart, only seven out of 24 USL-Pro teams don’t have an MLS affiliation of one form or another for next season.

The question worth asking if you are in a USL-Pro market is simple. What’s the incentive to pay for a ticket? Minor league baseball has a formula. Attractive ballpark experience, colorful (some would say ridiculous) team nicknames, promotions, and, of course, fireworks. Whether the Stockton Ports or the Myrtle Beach Pelicans wins the game you are attending isn’t as important as the experience of the game or, for some, the chance to say they saw some prospect when he was in the minors.

So what does matter in the USL-Pro? For the MLS II teams, development matters more than wins, although wins are preferred to losses. For those sides with development agreements with MLS teams, well, that’s trickier, isn’t it? The coach’s satisfaction at winning a game is probably short lived when the MLS club calls after the game to ask why such-and-such didn’t play and if he was hurt or being disciplined, why didn’t we know about it before the game?

That doesn’t answer the question of why, if you are in Colorado Springs or Austin or Dayton you should buy a ticket. Because you want to support the highest level of soccer in your community? Fine. Because your kids’ club is having a ‘night’ with the team? Great. Expecting a minor league version of the Seattle or Portland experience? Good luck.

American soccer has shown, again and again, that those arguments haven’t worked across the board in the long-run. Thinking that you can draw those fans who turn on the Premier League on Saturday mornings has shown to be erroneous thinking.

Instead, you have to actively give fans a reason to come to your game, especially those who are already soccer fans. Even after all these years, we know more about what doesn’t work versus what does work.

It isn’t saying anything new that the USL-Pro is both a growth industry (at the moment) and at a cross-roads. It’s all too easy to imagine that next season’s 24 USL-Pro teams will be 24 teams by 2020, all MLS affiliates and that whatever franchises want to be independent will be faced with the choice of spending additional expenses to join and stay in the NASL or to create a lower, fourth level of the professional pyramid, probably regional. We could be heading towards the professional baseball model of focusing the third division exclusively on development.

It took baseball a long time to come up with the best practices to make the minor leagues begin to work economically and offer a local alternative to watching a game from a distant market on television. The USL-Pro is in a place where, by definition, not all of its franchises are pulling in the same direction. The question becomes, how do the franchises find answers locally and how does the league find answers nationally, while serving more than one purpose.