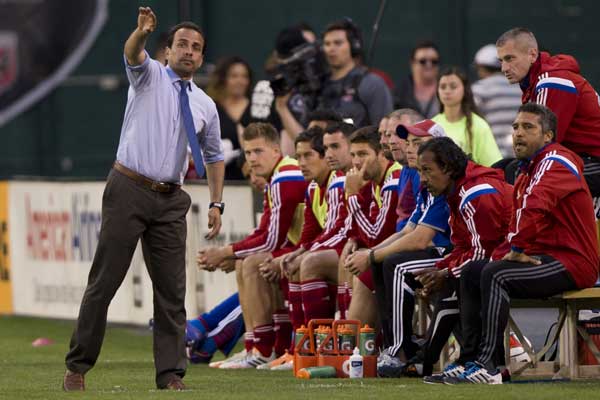 By Jason Davis – WASHINGTON, DC (Dec 17, 2014) US Soccer Players – It already seems like a long time ago that the LA Galaxy celebrated their latest MLS Cup win. Ok, it’s only been ten days, but MLS does a good job making the end of the 2014 season seem like a distant memory. It’s tempting to look ahead, moving past the dark, cold winter and to the start of the 2015 MLS season.

Next year will be the league’s 20th campaign, a milestone that deserves some celebration. It will feature two new teams in Orlando City Soccer Club and New York City FC, bringing the number of teams in the competition to 20. The two new teams are even now building their rosters for their debut seasons. That’s a process which throws more drafts, more trades, and more rumors into an already swirling pool of activity that marks the immediate aftermath of the MLS Cup final.

MLS does not stop to let the grass grow underneath its feet. They have business to do. 2014 is already fading into memory.

But wait, are we really done with a season that saw some pretty remarkable events? Maybe it’s necessary to slow down a bit, and take a look back at 2014 before there’s no time left to do so. Whatever Jurgen Klinsmann thinks of the length of the season, the MLS year now takes up so much of the calendar that if we don’t make an effort to review the previous season, the new one will be on us before we know it.

Beyond the high profile stories of Landon Donovan’s retirement, Thierry Henry’s imminent departure, and the death of Chivas USA 2014 delivered more than a few interesting stories, and more than a handful of great moments. In the spirit of the season, it’s time to give out some awards for the 2014 season before the 2015 consumes our memories of the year that was.

Entering the season, the LA Galaxy had all the making of an MLS Cup contender. There was no doubt about their firepower up front with Robbie Keane and Donovan. The central midfield had plenty of strength and moxie thanks to Brazilians Juninho and Marcelo Sarvas. Omar Gonzalez remained a rock in the back.

Still, there were question marks for Bruce Arena’s team, no matter how sure we were they’d be in the mix for another championship come playoff time. Would AJ De La Garza remain at right back, forcing Leonardo into a starting spot alongside Gonzalez? If De La Garza did move back to the middle, could James Riley do the job in his stead?

Enter Dan Gargan, an offseason pickup of such little import that most Galaxy fans might have missed the former Fire man joining their side. When Arena chose to put the Gonzalez-De La Garza pairing back together, and James Riley went down with an injury early in the year, it was Gargan who stepped into the void. Gargan did more than just hold down the spot in light of the injuries, he excelled. It wouldn’t be wrong to say that Gargan was an All-Star snub at midseason.

By season’s end, Gargan was the team’s unsung hero, a must-start player in a team littered with big names.

The Harangued By Hype Award

This award goes to the MLS team that failed to meet expectations by the widest margin in 2014. The list of nominees is long, in part because the winter transaction season brought so much hype to so many clubs. Toronto made a “bloody big deal” out of the signing of Jermain Defoe and Michael Bradley. Philadelphia threw (some) cash at their problems with the acquisitions of Maurice Edu, Cristian Maidana, and Vincent Nougeira.

Of all the clubs who began the year with some reason to dream of an MLS Cup title, the Portland Timbers fell hardest in 2014. Portland’s 2013 campaign set the stage for the club to step into the League’s elite with another challenge for first in the West—perhaps this time with a Supporters Shield attached—and a deep playoff run. Not only did they fail to achieve either of those goals, they missed the postseason entirely thanks to an early season stumble that saw them earn just 10 points from 11 games.

Maybe it was a sophomore slump for Caleb Porter. Darlington Nagbe’s difficult season (1 goal) didn’t help. The Timbers spend most of the year desperately searching for center backs capable of basic defending. The club’s vaunting atmosphere at Providence Park did little to help them win games, for all the singing of the Timbers Army.

For whatever reason, MLS failed to acknowledge the coaching brilliance of a man who not only led his young team to the MLS Cup playoffs in spite of a rash of injuries, but did so in his first year on the job. He did the same thing with a young, injury-hit team last season. The man is Oscar Pareja, and while he might not have been the MLS Coach of the Year by the standards of the voters, he more than deserves recognition for his accomplishments.

Before the season began, it was easy to see the saga of Pereja’s jump to FC Dallas from the Colorado Rapids as a black eye on his burgeoning reputation. There was some measure of disappointment in it, too, because Pareja had done such a stellar job with the Rapids in 2013. The reason names like Clint Irwin, Shane O’Neill, Chris Klute, and Dillon Powers were familiar to USMNT fans was almost entirely due to Pareja.

Then the Colombian coach, who played eight seasons in MLS almost entirely with the Dallas Burn/FC Dallas, replicated his Rapids feat. The FC Dallas team of 2014 was rife with inconsistent performers, injuries, and questions over style. Through it all, Pareja kept the team on even footing, staving off the lull that can undermine an MLS season like what happened to Dallas a year ago. He moved players around and compelled strong performances from them. He covered for injuries, even shifting the team’s style if necessary. He kept FC Dallas competing when it would have been very easy for the team to simply fade.

Considering all of the variables at play, the job Pareja did over back-to-back seasons may be one of the best in MLS history. Maybe it’s not worth a trophy, but it does earn him the spotlight as one of the most exciting young coaches in Major League Soccer.