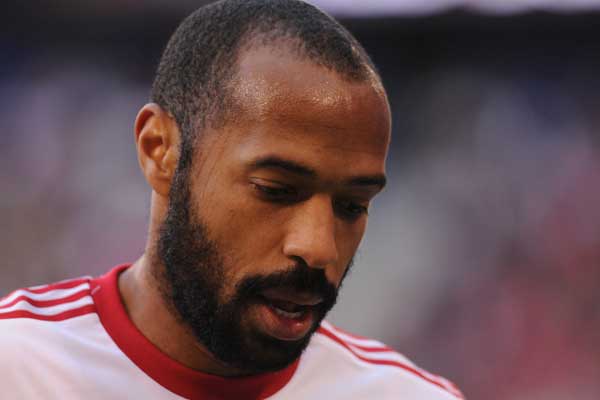 By Jason Davis – WASHINGTON, DC (Dec 3, 2014) US Soccer Players – Thierry Henry was not cut out to be the face of MLS, or any other league. The former Juventus, Arsenal, and Barcelona player is too reserved, too gruff, too unwilling to put up with the impositions of fame to happily take up the mantle as the leading character in the aspirational drama that is Major League Soccer.

That he was talented and successful enough to carry that load is entirely immaterial in light of the rather important fact that Henry is a soccer player who did his best to put up with us, but didn’t ever seem like he was much good at it.

That he gave MLS so much of his attention, perhaps more than any other European star who washed ashore here looking for a new challenge and a big pay day, reveals much about what mattered to Henry, and what did not.

It was obvious from the beginning that Henry’s time here wouldn’t be anything like David Beckham’s, the last former Premier League great coming off a stint in La Liga to be unveiled in front of a mob of reporters. When Henry joined the New York Red Bulls, fresh from Barcelona, his arrival was the start of a new era for one of Major League Soccer’s original franchises.

But Henry presented an image of reserved excitement, the type of quiet calm that is an innate part of his personality. Henry was here to play soccer, not proselytize for the game. None of his comments upon arrival indicated that the French World Cup winner would follow Beckham’s lead in making his time in the U.S. a “project” in any sense beyond the local job of helping the Red Bulls win games. Sure, Henry had something of a brand. Playing for New York was part of that. However, he was not the crossover behemoth that his English contemporary was. Anything beyond the field that happened in the public eye was a bonus.

That’s not to say that Henry wasn’t entirely committed during his four and a half years in MLS, or that he shirked any of his duties. Attracted to the vibrancy of New York City, Henry’s sense of adventure simply tended to be of a very personal kind. One can imagine Henry walking up and down the streets of Manhattan, taking in the sights, sounds, and smells of the city that never sleeps, never speaking to a soul. Short of his scoring some stunning goal or setting up a teammate with a brilliant pass, such a scene would place Henry in his natural environment.

Henry grumbled on the field when teammates failed to match his level. He displayed petulance over playing on the League’s small number of artificial fields. He occasionally caused waves within the Red Bulls organization, and in one high-profile showdown in 2013, forced his young head coach to take a stand against him. He made the media’s life difficult by giving short, pat answers to questions

So Henry wasn’t the willing poster child his status might have allowed him to be, should he have chosen to take on the mantle. He made up for it in other ways, though many of them went under the radar for much of his time with the Red Bulls. Henry really is a soccer’s player’s soccer player. Perhaps no player, much less any highly paid Designated Player, knew more about opposing teams and players as Henry.

When Henry heaped praise upon Columbus’ young American midfielder Wil Trapp, it wasn’t idle chatter. Henry’s words had weight not just because of his status as one of the best ever to play the game, but because he understood MLS. Henry wasn’t basing his assessment of Trapp on one Crew match with the Red Bulls. He was pulling from a reservoir of knowledge that went much deeper into the week-to-week workings of the league. Henry’s commitment to MLS wasn’t showy. It didn’t reveal itself in interviews or magazine pieces. It was, for lack of a better description, just about the soccer.

If we’re lucky, and we certainly were to witness Henry perform in an MLS uniform for four and a half years, this will be Henry’s enduring legacy and his repeatable example. If MLS is going to shake the “retirement league” label that continues to dog its growth, more of the European stars that migrate to this part of the world towards the end of their careers will need to embrace the League the same way Henry did. Even if their personalities mean they won’t fill the Beckham role.

Over the course of four and a half years, Henry delivered plenty on the field. He helped the Red Bulls win their only major trophy in their history. He made the Best XI three times. He scored 51 goals, some of them of such a spectacular variety that they’ll live forever in MLS lore. His later development into a provider for his teammates displayed the full breadth of his incredible ability and his razor sharp soccer mind.

He made a mark worth celebrating, while at the same time frustrating just enough to remind us that he was something deeper and more complicated than a name on the marquee. He didn’t come here to be anyone’s meal ticket. He came here to play soccer to the best of his abilities and to experience New York.

Henry did both, in his own particular way. MLS is better off for it.