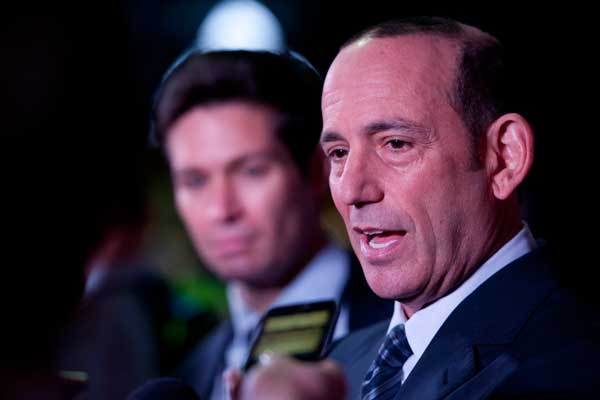 Commissioner Garber spoke about the increase in playoff ratings along with mentioning players leaving MLS. Garber talked about Thierry Henry and announced that the league will honor Landon Donovan during the 2015 MLS SuperDraft.

Garber also mentioned the media controversy between himself and USMNT coach Jurgen Klinsmann. Though he didn’t name Klinsmann directly, Garber talked about the importance of MLS in growing the USMNT.

MLS announced something called Decision Day that will allow for flexible scheduling for the final match day of the season in 2015. Flexible scheduling in general is also on the table for MLS to improve the games available to national television outlets.

During the roundtable, Garber addressed the collective bargaining negotiations that are currently ongoing with the MLS Players Union. Garber spoke of priorities for both sides with a negotiating session scheduled for December. Garber said he was confident the two sides can reach an agreement on a new collective bargaining agreement and described “the dynamic as positive.”

Garber confirmed that the league will expand to 24 teams before the end of the decade but wouldn’t put a cap on expansion. He said that MLS isn’t a mature league and he doesn’t know how many MLS teams North America might support in the future. Miami is still an open issue with Garber saying MLS won’t expand to that market without a stadium deal in place. When questioned on why that’s required for Miami when NYC FC and the second LA team will start without their own stadiums, Garber pointed to the failure of the Miami Fusion and Tampa Bay Mutiny.

Garber also confirmed the rumor that MLS will recommend to its Board of Governors that the playoffs should expand to 12 teams for next season. That move still needs approval, with the idea that MLS will stick with 12 playoff teams through the expansion to 24 teams. MLS will keep the away goals rule to decide playoff series.

Responding to the issues with the changing nature of MLS rules and regulations, MLS is committing to greater transparency during the 2015 season. MLS received criticism in particular for how Jermaine Jones was allocated.