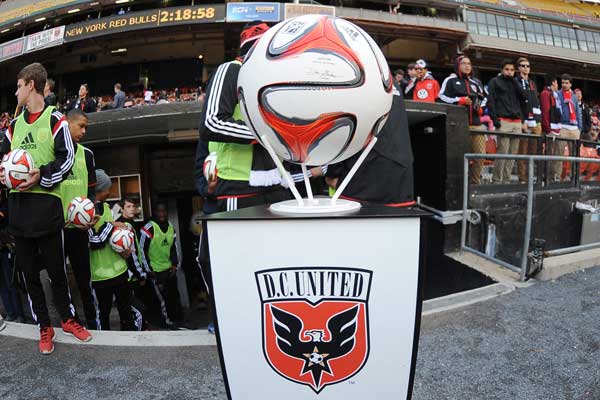 By J Hutcherson – WASHINGTON, DC (Dec 4, 2014) US Soccer Players – The first time I went to RFK Stadium for an MLS game was in 1998. I was in school in Chicago and got a free trip to a conference at Catholic University. DC United played the expansion Chicago Fire. Compared to Soldier Field, RFK Stadium wasn’t a noticeable downgrade. The NFL used RFK until 1996, and the stadium had a reputation as formidable in MLS. Bouncing stands, engaged fans, the works for MLS in ’98. DC beat Chicago 4-1 that afternoon.

By 2003, I was living in the DC suburbs and regularly going to United games. By that point, the stadium already had a reputation. I remember an MLS club employee telling me about the interesting wildlife in the lower part of the stadium well before Twitter existed and the RFK raccoon had its own account. For what it’s worth, I worked as a photographer at RFK for several seasons and saw nothing down there. What was obvious was that RFK Stadium was in decay.

Major League Baseball had no choice when they quickly moved the Montreal Expos to DC. RFK Stadium got a remodel, a new baseball press box, batting cages underneath what used to be a set of seats, and a power wash of the upper deck. If anything, that made it worse for soccer.

Baseball’s return to RFK turned the area behind one of the goals from seats to more gravel. When baseball left, the lower bowl stayed the same. The story at the time was that the Stadium Authority didn’t keep the seating sections to return the stadium to it’s football setup. The famous bouncing stands at RFK move on rails to switch from football to baseball, something that must’ve looked like an Epcot Center display in 1960 but made no sense in the sports-specificity era decades later.

The problem for DC United was similar to what the Chicago Fire faced when they had no better choice than moving to Naperville. Just like in Chicago, there aren’t a lot of +25k capacity stadiums in the greater DC area.

Crystal Palace USA used Navy Stadium in Annapolis. That’s a far nicer stadium than RFK, but it’s a long way from the District. I went to games at Navy Stadium with announced attendances of 400 people. That included a game against the Harrisburg City Islanders where the away support might have been two dozen people. They were the loudest soccer fans in Navy Stadium.

For DC United, half options were never really options. Other than fundamentally changing the team by moving to a different city, United needed to build somewhere close enough to the city for it to count. That was an easier said than done scenario almost from the very beginning.

What makes the current push for completing a stadium deal interesting is that this isn’t a desperation move. It certainly seems like that with some of the coverage, but this is as close to first choice as United is likely to get. They’re in the newly built stadium neighborhood. That might not have taken off the way real estate developers might have preferred, but it is a place now associated with condominiums and pro sports. DC United isn’t breaking ground in that area, they’re adding another option.

That’s important for DC as well, giving a redeveloped part of the city something that adds public events. It’s an alternative to a larger baseball stadium with both capable of hosting other events. It might be the push that turns that area into a destination point on its own with so many games and events on the schedule.

District of Columbia government is well aware of what that means. It’s part of the reason why this push for a soccer stadium is so closer to completion. That area of the District is almost there. The city originally thought baseball on its own would be enough. They were wrong. As much as a soccer stadium is a necessity for DC United, it also matters more than you might think for the city itself.

ESPN FC has an excerpt from USMNT and Everton goalkeeper Tim Howard’s new autobiography due out on Dec 9 and a response over part of that excerpt from former USMNT goalkeeper Brad Friedel.

Former USMNT player and current ESPN pundit Alexi Lalas explains what he thought his role was then and now.

Inside World Football’s David Owen explains one of the ways Manchester City is reducing costs, a much smaller club. Another take on Manchester City finances from FC Business’s Aaron Gourley.