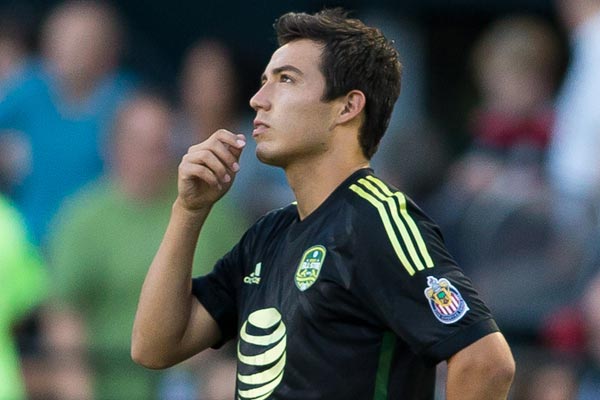 By Luis Bueno – RIVERSIDE, CA (Jan 8, 2015) US Soccer Players – We will remember the Apertura 2014 season as the one where Club America separated itself from the rest of Liga MX. However, trying to take America’s crown has not necessarily been the main motivator for clubs ahead of the Clausura 2015 season.

Last season was a bit of a wasteland for offenses around Liga MX. For the first time since the 2011 Apertura season, no club had more than 30 goals. Worse, several clubs dragged down the quality of the league with their dreadful goal outputs. Veracruz had a meager eight goals while U de G (11) and Chivas (13) were not much better.

Consequently, clubs reloaded and brought in some foreign scoring talent to try and up their respective scoring tallies.

Whether a rise in goals equates to a more competitive tournament remains an open question. If nothing else this season should be more entertaining than the previous one. The 2015 Clausura, though, is still one club’s to lose.

Club America: The rich got richer. America are a better club now than they were when they hoisted the Liga MX crown just one month ago. America brought in former Santos standout Carlos Darwin Quintero as well as ex-Tijuana star Dario Benedetto and suddenly have a lights-out attack. Combined with Oribe Peralta and Rubens Sambueza, America’s attack will be difficult to contain. Perhaps the only blemish is on the touchline. The club let manager Antonio Mohamed go the day after winning the championship and brought in ex-Leon boss Gustavo Matosas to replace him. Matosas may have to figure out how to meld this group together but Mohamed left behind a well-structured outfit so any transition should be minimal.

Leon: After winning consecutive Liga MX titles, Leon had a quiet season and were unable to reach the postseason. The club made a managerial change in the offseason but other than that had a low-key winter. No matter. This club has the talent to contend for the title once more. Forward Mauro Boselli tied for the league lead in goals with 12 while los Esmeraldas led the league in goals with 29. Defensively, though, Leon were the worst as the club conceded a league-high 27 goals. Goalkeeper William Yarbrough is back, though, after having broken his right ring finger early last season. With Yarbrough back and new manager Juan Antonio Pizzi, Leon should also return to their previous glory.

Monterrey: Los Rayados bid farewell to club legend Humberto “Chupete” Suazo but the team is re-energized ahead of the 2015 season nevertheless. Suazo’s departure will hurt with the fans but his output will not. Suazo had just two goals last season and notched just 12 in the previous two seasons combined. Monterrey brought in Colombian international Alexander Mejia as well as fellow countrymen Edwin Cardona and Yimmi Chara to help boost the attack. The young Colombian trio may take time to adjust but, much like last season when the club went from middle of the pack to semifinals, Monterrey will hit their stride later rather than sooner.

Cruz Azul: La Maquina did themselves no favors at the end of the 2014. First, the club suffered through a miserable season, with just five wins and 16 goals for their efforts. No matter, though, as Cruz Azul had a spot in the FIFA Club World Cup. However, that served as no great consolation as Cruz Azul were thrashed by Real Madrid and lost to Auckland City in the third-place match in a penalty-kick shootout. Cruz Azul brought in former Bayern Munich and Paraguay striker Roque Santa Cruz but his best-by date is long past. Cruz Azul’s inconsistent play will carry over into the Clausura 2015 campaign despite his arrival.

Pumas: After finishing third in the Clausura 2014 season, expectations were high for Pumas for last season. Instead, the club met with misery and disappointment from the start. Pumas fired manager Jose Luis Trejo early in the season and replaced him with Guillermo Vazquez, who twice had previously managed the club. Vazquez was able to guide Pumas into the postseason but as the eighth seed were unable to do much damage and went out after losing to America. Pumas cleared out some underperforming veterans from its roster such as Marco Palacios and Martin Romagnoli but the additions of Uruguayans Silvio Torales and Jonathan Ramis are hardly noteworthy. Pumas have long relied on their youth system to reinforce their first team but that process will not lead to much this season as Pumas were in need of more immediate help.

Almost as intriguing as the race for the playoffs will be the race to stay in the top flight. Chivas’s relegation troubles are real. The club could face the unthinkable embarrassment of dropping to the second division. Veracruz, U de G and Puebla are in a three-way tie for last place in the relegation table but Chivas are just above them. If Chivas struggle early, the club will face even more scrutiny and pressure than they are used to and the club may not respond well to such times. Chivas brought back Marco Fabian from Cruz Azul as well as Erick “Cubo” Torres from MLS to help but nothing seems to work in Guadalajara.

Leon became the second club to win consecutive titles in the Apertura 2013 and Clausura 2014 seasons. America now will accomplish that feat by winning the league in consecutive seasons once more and putting another exclamation mark on their already defining run.