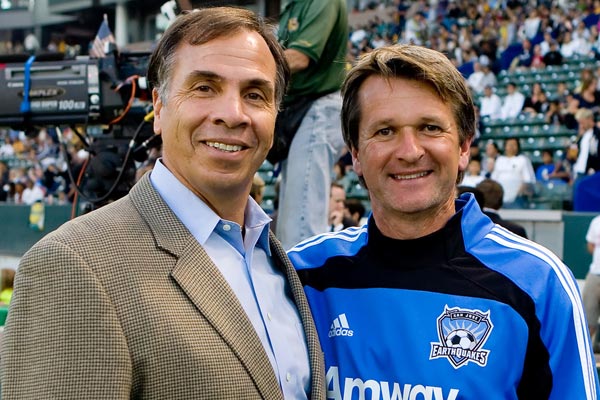 By J Hutcherson – WASHINGTON, DC (Jan 8, 2015) US Soccer Players – There are two major coaching philosophies currently at work in MLS. Both have a significant amount of games and titles to suggest they work, with the authors and their acolytes never short of opportunities. When a rumor made the rounds on Wednesday that the New York Red Bulls may or may not have made a play for the services of LA Galaxy coach Bruce Arena, it almost made sense. So did their announcement of Jesse Marsch as their new head coach.

Though their spin on what Arena established as the template for winning in MLS differs, the three of them have had the head coaching job at six MLS clubs. At every stop, they influence not just their assistants, but the entire organization. Arena’s dual roles as coach and GM aside, MLS coaches might not have the power of say a Premier League manager, but that doesn’t lessen their influence relative to scale.

What you end up with is a family tree of sorts, creating their own riffs on what worked. Arena won titles with DC and now with LA. Bradley did the same with Chicago and did quite well with an underwhelming Chivas USA team in 2006.

Then there’s Frank Yallop. The Canadian international and former Canada coach built the original San Jose Earthquakes into a contender in the early 2000s in his first head coaching job. He started out moving from player to assistant coach with the Tampa Bay Mutiny under Tim Hankinson, later working for Thomas Rongen at DC United.

Yallop’s work at San Jose shadows what Bruce Arena did with DC United at the start of MLS and what Bradley did with the Fire in that team’s expansion season in 1998. He took advantage of overlooked or underappreciated players, brought in a quality coaching staff, and won MLS Cups. That’s the point of the job, after all.

His assistant Dominic Kinnear took San Jose to Houston when the team relocated, winning back-to-back MLS Cups. After coaching an LA Galaxy squad that was never really his, Yallop was back with the new version of the Earthquakes. In a very different version of MLS and playing in a tiny stadium, it took four seasons before he got the Quakes back to prominence. Yallop left the club the following season with the Quakes unable to match 2012’s Supporters’ Shield performance.

It’s here where our story moves from chronology to methodology. Arena and Yallop aren’t the same style of coaches. Both certainly relied on a deeper understanding of how MLS operates than most of their contemporaries. You can look at the players both picked up for their teams in an earlier era of MLS and wonder what the rest of the league was doing, much less thinking.

MLS is smarter now than it was then. To pull off a revival act like we saw with Ben Olsen and DC United in 2014 takes sifting through more than former stars or hoping to move some draft picks for experienced MLS professionals. The risk vs reward is greater simply because there are more teams and more information now than there was then.

Arena and Yallop aren’t template coaches, sticking to a set of methodologies and motivational methods that may or may not fit the times. Both are better than that. It’s why they continue to be so influential in MLS. It’s also why their methods still resonate.

If you’re rebuilding or starting an MLS club, it makes sense to look at Arena or Yallop. That doesn’t necessarily require hiring either of them directly, but it does mean considering which of their methods might bring you the quickest success. It’s what the New York Red Bulls are currently doing with Jesse Marsch, and it’s what the Montreal Impact tried when they hired Marsch as their coach in their expansion season. It’s what San Jose did by bringing Yallop back and what they’re trying again by hiring Dom Kinnear from Houston. It’s also what makes Houston’s choice to replace Kinnear as coach so interesting.

Houston is the original San Jose Earthquakes. You can leave the record book and name behind, but it’s that team. Yallop to Kinnear, a core of players that won championships in both cities, and an understanding of what worked in MLS. There are critics who would say what worked is catching up with both of those coaches. While Arena wins titles, Kinnear’s Houston went from contender to struggling and Yallop is having his own issues with the Chicago Fire.

That might explain Dynamo management’s decision to break the connection. They brought in a complete outsider as coach with Owen Coyle, and with it a steep learning curve. Kinnear’s chief assistant Steve Ralston followed him to San Jose. Coyle’s Dynamo will have to be different.

Adrian Heath faces a similar issue with Orlando City. Though he has American minor league soccer coaching experience, there’s no direct connection to the coaches that figured out how to win in MLS. Like Coyle, he’s starting with a set of assumptions that might need adjusting early and often.

MLS is a different league that changes quickly. Rules, schedule, and player availability combine to complicate the job. What Arena and Yallop have accomplished is to create separate versions of not only what works in MLS, but what doesn’t. What separates them from other successful MLS coaches are the careers of their former assistants. It makes both of their methods almost unavoidable for clubs trying to figure out how to win games in Major League Soccer.