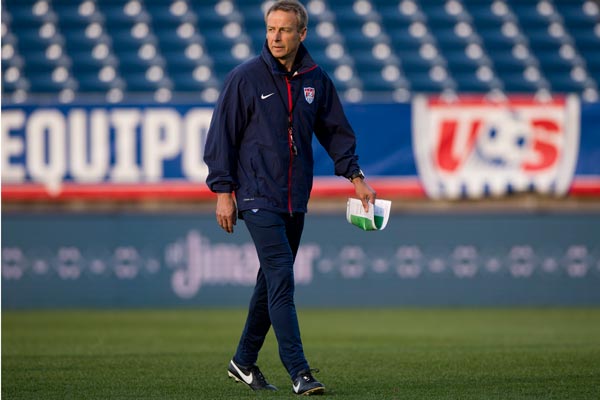 By Charles Boehm – WASHINGTON, DC (Jan 12, 2015) US Soccer Players – On Friday afternoon, the 2015 MLS Player Combine opened in Ft. Lauderdale, Florida. The five-day event provides a final audition for the players – predominantly US and Canadian ones who have risen through the college system – hoping for selection in Thursday’s MLS SuperDraft.

It was a transplant who grabbed the spotlight on Day 1. Dzenan Catic, a Bosnian-born, Michigan-reared striker who already had an unsuccessful stint in the Bundesliga. Catic has been playing his college ball in the looser regulatory confines of the NAIA as a result. He scored one of the day’s only goals and staked his claim as perhaps the most pro-ready goal scorer at the event.

Six hundred miles to the south in Kingston, Jamaica, the USMNT U-20s stumbled to a 1-1 draw with Guatemala in their opening match of the 2015 CONCACAF U-20 Championship that same afternoon. Replaying a now-familiar ritual, Tab Ramos’s talented team enjoyed more of the possession but failed to adequately subjugate their underdog opponents. The USMNT paid the price when they conceded a late goal to drop two points.

The next day, in a seemingly unrelated happening some 700 miles west of Jamaica, a promising young attacker from Southern California made his first competitive appearance for his new club. His name is Enrique Cardenas. After a successful trial stint he was turning out for the reserve side of Atlante FC, the Cancun-based Mexican club that was once home to Jonathan Bornstein.

Almost exactly a year after going undrafted in the 2014 SuperDraft and finding not a single MLS team willing to give him a shot, the small but skillful Cardenas shined on his quiet debut in Atlante’s navy-and-red colors. Cardenas scored a goal and earning man of the match honors. It marked an encouraging first step as the playmaker looks to break into the starting 11 of the second-division side after signing a short-term contract earlier this month alongside another overlooked Latino creator from California, Jose “Choco” Gomez.

Though packed with pros plying their trade at major clubs around the world, the US U-20s would fare even worse in their second game on Sunday, losing 1-0 to unfancied Panama and badly ding their World Cup plans.

Even on one of the quieter weekends of the American calendar, a wider lesson showed from these disparate events.

Despite years – and millions of dollars – spent strengthening and streamlining the process by which talented players here are grown, identified, and sculpted into top-level professionals, the United States remains arguably the most chaotic developmental environment in world soccer.

Those unfamiliar to the scene may struggle to make sense of the reality that one nation could foster three scenarios quite like these. How did Catic wind up where he is now? Why do our nation’s most celebrated young prospects so often struggle with big stages and high stakes like World Cup qualifying? How can it possibly bode well that players like Cardenas – who actually connected with Atlante’s scouts via a Sunday league in LA – must go abroad to find opportunities to prove themselves?

Youth coaches are fond of calling the American soccer system “the Wild West,” and cases like this prove why.

Catic – whose story is reminiscent of his World Cup-starring countryman from St. Louis, Vedad Ibisevic – is knocking on MLS’s door after a winding personal and professional road. One of millions affected by the savage Balkan wars of the 1990s, he won myriad youth honors and championships at the high school, Development Academy and PDL levels as he rose through the same club system that produced Josh Gatt.

Granted, Catic still has plenty to prove. It’s heartening to see him doggedly carve out another shot in the land of second chances after failing to catch on in Europe with the likes of Kaiserslautern and FC Basel, and a preseason trial with the Seattle Sounders last year. That said, should he finally blossom this time around, he’d face what he has previously acknowledged would be a knotty choice of international allegiance between his native and adopted lands.

Cardenas grew up in little Coachella, California, a few steps removed from the SoCal spotlight. Even at a smaller youth club, he caught the attention of a few college coaches and worked his way into a leading role at UC Irvine. Last year, he watched his stock fall while playing out of position at the MLS Combine. Afterward he roundly criticized the larger system that cast him aside as “foolish” and “ludicrous.”

“They don’t give players like us an opportunity,” Cardenas told TopDrawerSoccer.com. “We’re just going to keep bringing creative players from abroad and players born in the US aren’t going to succeed. There’s something wrong with the system.”

While he’s only one voice among myriads, tales like his and Catic’s should give pause to those orchestrating the developmental process at US Soccer. The recurring stumbles of prized units like the current U-20 YNT are a high-profile reminder that the right formula, even for those captured by the Federation’s nets, remains elusive.