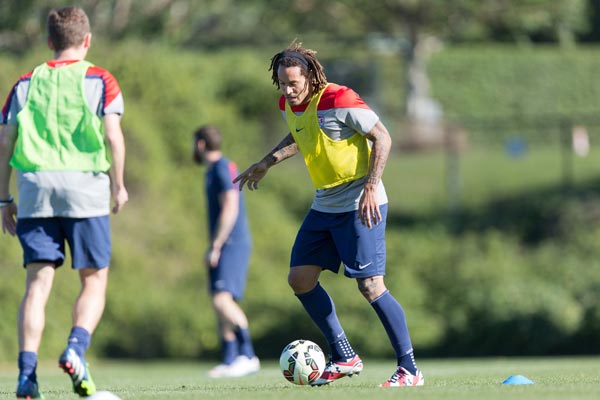 By Clemente Lisi – NEW YORK, NY (Jan 19, 2015) US Soccer Players – Before the age of rugged center backs and the sweeper-keeper, there was the sweeper. A versatile central defender who played behind the backline, his role was to literally sweep the ball away to thwart an opponents’ scoring attempt. As tactics evolve, coaches these days typically deploy defenses with just three players or backlines featuring two center backs. The romantic idea of a sweeper is all but gone.

Legendary sweepers such as Franz Beckenbauer and Franco Baresi played until the ages of 38 and 37, respectively. Former Italy captain Fabio Cannavaro, more of a modern-day center back than a traditional libero such as his compatriot Baresi, also played until the age of 38. With that sort of longevity, it’s no wonder that some players are switching roles – often going from the attack to a more defensive position – in an effort to extend their careers.

Jermaine Jones is one of those players whose careers may well last into his late 30s. A midfielder for the New England Revolution in MLS, at USMNT level he underwent a transformation into a center back under head coach Jurgen Klinsmann. The overall rationale has been that it can help extend Jones’ career through to the 2018 World Cup. It is a concept not unheard of — least not to Klinsmann. Another former German international, Klinsmann’s former teammate Lothar Matthaus, switched from attacking midfield to defender, which gave him continued success. Matthaus played until the age of 39, ancient for a professional field player.

Following a 1-1 draw versus Honduras this past October (where Jones played in the back), Klinsmann told reporters: “The thinking behind it was his leadership. We are trying to push further up the field, and then you can have longer balls that drop over the backline. I am looking for him to be loud and vocal and also to deliver the clean passes, which are one of his trademarks. I think it went well.”

“I’m open always to new ideas,” Jones told Sports Illustrated last fall. “Yeah, (Klinsmann) asked me, and I was at first a little bit, ‘Mhmmm, okay…’ But once I have no problem with that and the position is okay, and maybe I have some fun in the next years.”

With the USMNT back in January camp, Klinsmann again recalled the 32-year-old Jones, arguably the most athletic and versatile of any US player at the moment. Again, he was listed on the call-up sheet as a defender. The move has elicited all sorts of reactions from fans, especially after Jones had such a strong showing in the midfield at the World Cup. On Reddit, one fan preferred to see Jones in the midfield: “The thing I love about Jermaine is that there not one player in the world that intimidates him. We gave Belgium (at last summer’s World Cup) too much respect. He was one of the only players taking it to them.”

Jones isn’t the only USMNT player to switch positions as his career progressed. He’s not even the only one under Klinsmann.

Another test case is DaMarcus Beasley. He extended his career by switching to defense – in his case left back — after playing in the midfield and as a winger for much of his life. Beasley, who retired from international duty at the end of 2014, played for Klinsmann at the 2013 Gold Cup and 2014 World Cup as a left back. In doing so, he became the first American to ever play at four World Cups. That flexibility also allowed Beasley to surpass the 100-cap mark in 2013 after Klinsmann began utilizing him as a left back while he was still playing forward for Puebla of Mexico, his club at the time.

“Do I still have the midfield mentality sometimes? Of course. Do I still want to score goals? Of course,” Beasley told reporters last July. “I never have that out of mind when I play. But I do have a job to do, being a defender, and that’s to defend and that’s my first job.”

Defending will now also be the first priority for Jermaine Jones when wearing the USA shirt. It’s something that will not only extend his career, but also give Klinsmann options and much-needed stability in the back.