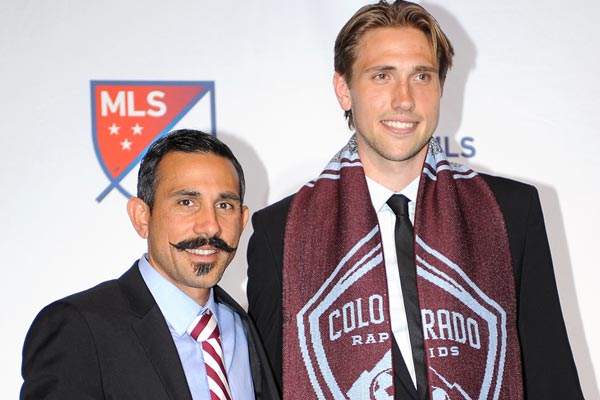 Friday’s soccer news update starts with an unintended star of the 2015 MLS SuperDraft, and it’s what you see in the picture above. Colorado Rapids coach Pablo Mastroeni explains his fabulous moustache to MLSsoccer.com’s Benjamin Baer.

Philly.com’s Jonathan Tannenwald has MLS commissioner Don Garber talking about a lot of things. SI.com’s Brian Straus has Landon Donovan making a cross-sports comparison when talking about having his name on the MLS MVP Award. SB Nation’s Robert Jonas explains why San Jose should go after USMNT player Sacha Kljestan, currently linked with a move back to MLS.

The Daily Mail’s Craig Hope picks up the story of Jermain Defoe’s season in Toronto. Defoe is now officially a member of Sunderland signing through the 2017-18 season.

“It is a great club and I’ve always enjoyed coming up here and playing against Sunderland because of the stadium and the supporters. It is a great place to play and I’m really looking forward to it.” Sunderland striker Jermain Defoe.

American Soccer Now’s Brian Sciaretta talks to members of the USMNT U-20s about a tactical switch at the 2015 CONCACAF U-20 Championship.

Thanks @LAGalaxy and @AEGworldwide for hosting the #USMNT at Staples Center for @Lakers vs. @cavs! @NBA pic.twitter.com/UxIkWt9NSK

Hunter Davies explains what it means to have a local player on a Premier League team in an article for the New Statesman. AP’s Rob Harris looks at David Ginola’s potential FIFA presidential candidacy.

Renewed call for @FIFAWWC to allow @ussoccer_wnt to play on grass at ’15 Women’s World Cup. Men don’t play on turf, neither should the women