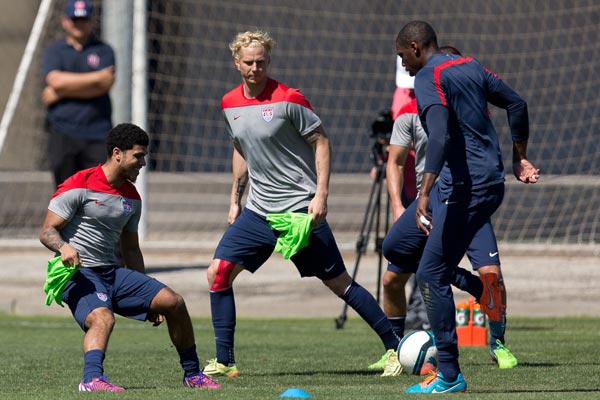 By Clemente Lisi – NEW YORK, NY (Jan 26, 2015) US Soccer Players – Over a decade ago, the MLS offseason spawned the creation of the USMNT January camp. With it came a rare opportunity for the USMNT coaches and players to come together ahead of the first game of the year. Many players, who would otherwise remain inactive during the winter, have in the past used the camp as a springboard to National Team stardom.

However, the camp’s main objective is to give the US coach a closer look at his options ahead of the calendar year. In a post-World Cup year, and ahead of the Gold Cup, this year’s January camp means a lot.

“When you put together the roster for January camp, you eventually talk to the players, you talk to their club coaches and everyone is in a bit of a different situation,” USMNT coach Jurgen Klinsmann said in a US Soccer Q&A. “The season here has a different schedule than overseas or in Mexico, and here and there you run into issues with players that you think it’s better if they maybe keep on curing some injuries, like in the case of Omar Gonzalez or Graham Zusi. They are not fully fit yet, so we decided to say ‘take it easy going into pre-season of your club team.’ Kyle Beckerman wants to focus on his club situation because there are a lot of changes in Real Salt Lake. So you discuss every case individually and hopefully you come up with the right answers to it, but sometimes you’re missing a couple of players that are usually part of your team.”

How effective has January camp at the US Soccer National Training Center in Carson, CA, been for the US since it was first put together in 2004? History shows it works. In 10 games, the US has amassed a 6-4-1 record post-camp.

As the US prepares to take on Chile, below is a look at past camps and how the United States fared in its first game of the year.

In January 2004, the USMNT held its first-ever training camp at The Home Depot Center (now known as StubHub Center), which had opened the previous summer as a soccer-specific stadium. Then-coach Bruce Arena called in 27 players ahead of its friendly against Denmark, a process that kicked-off the 2006 World Cup cycle. The Americans played Denmark to a 1-1 draw on January 18 — the lone US goal coming via a Landon Donovan penalty kick in the 77th minute.

Arena called in 28 players ahead of that year’s Hexagonal. The camp included then-newcomers Clint Dempsey and 2002 World Cup veterans like Clint Mathis and Tony Sanneh. The team’s first game was not a friendly, rather a World Cup Qualifier on the road against Trinidad & Tobago. The USA got the Hexagonal off to a good start, a 2-1 victory in Port of Spain with Eddie Lewis scoring the winner in the second half.

Ahead of the 2006 World Cup, Arena called in 27 players in preparation for its friendly versus Canada in San Diego. The US drew the January 22 contest 0-0, highlighted by Freddy Adu collecting his first senior cap ever. Adu entered the match in the 81st minute for the injured Eddie Johnson. Goalkeeper Matt Reis also earned his first cap.

Under interim coach Bob Bradley, the US opened camp with 29 players ahead of a year that would include the Gold Cup and Copa America. As for its first game of the year, the US cruised to a 3-1 victory against Denmark at The Home Depot Center.

Bradley called up 26 players ahead of its January 19 contest at The Home Depot Center versus Sweden. The Americans won, 2-0, with Donovan’s penalty kick in the 48th minute his 35th goal for the USMNT, pushing him past Eric Wynalda for the all-time lead. Donovan wasn’t the only one who made history. Defender Eddie Robinson’s opening strike in the 15th minute made him just the 44th player in team history to score a goal in his first appearance.

Bradley entered January camp by calling up 25 players, prepping them for the team’s January 25 friendly versus Sweden at The Home Depot Center. The United States defeated the Swedes once again, 3-2 thanks to a Sacha Kljestan hat trick.

Ahead of the 2010 World Cup, Bradley called up 30 players – the highest number ever in his tenure as coach – ahead of its January 23 friendly against Honduras at The Home Depot Center. Despite having won the Hexagonal the previous year, the US lost 3-1 to their CONCACAF opponents with Clarence Goodson scoring the lone American goal in the 70th minute.

Bradley called in 24 players to camp ahead of its January 22 friendly versus Chile. The game, played once again at The Home Depot Center, ended 1-1. Teal Bunbery’s penalty-kick goal in the 75th minute tied the match.

In Klinsmann’s first January camp in charge of the team, he called up just 20 players for its January 21 match against Venezuela in Glendale, Arizona. In what turned out to be a heart-stopping finals, the Americans won the game 1-0 via a Ricardo Clark goal in stoppage time.

Klinsmann called up a 25-man roster ahead of the Hexagonal round of CONCACAF World Cup qualifying. The training camp culminated with a January 29 friendly versus Canada in the team’s first-ever match at Houston’s BBVA Stadium to kick off its centennial year. The game ended 0-0, but was notable for Matt Besler earning his first cap.

Ahead of the World Cup, Klinsmann used his third January camp to take a look at 26 players. In the first game of the year, the US defeated South Korea 2-0 at StubHub Center. Two goals from Chris Wondolowski sealed the win.