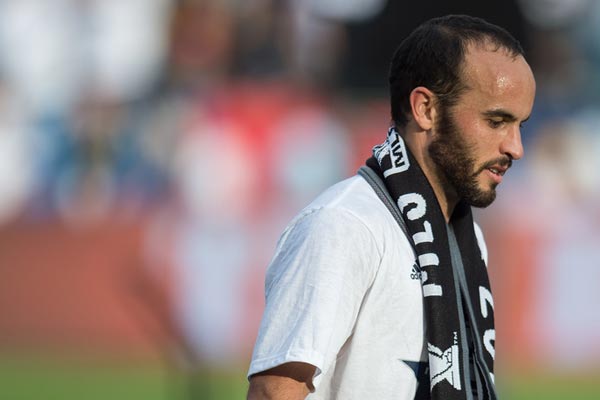 By Luis Bueno – RIVERSIDE, CA (Jan 14, 2015) US Soccer Players – For the last decade, there has been one constant with the LA Galaxy. Landon Donovan arrived in LA ahead of the 2005 season and instantly became the identity of the club. Over time, he helped transform the Galaxy into a team that was good but not great into a club that fancies itself as the face of MLS.

But after Donovan, what?

Now that Donovan is retired, the Galaxy face uncertainty the likes of which they have not faced in quite some time. Landon Donovan offered the Galaxy a figure to build around and depend on, but the club now must move on.

The Galaxy tipped their immediate plans for the post-Donovan era with the impending arrival of current Liverpool captain Steven Gerrard. Big names who will keep expectations high remain a priority even if they come with risks.

The Galaxy will use their Designated Player slots on big-name foreign talent. The Gerrard signing made that clear. The Galaxy locked down one young American with a DP slot in Omar Gonzalez but the other two spots are for big names. Mix Diskerud joined MLS and Jozy Altidore appears set to return to the league but neither player would fit the Galaxy’s mold.

Names will likely take precedence over team needs as well. The Galaxy already have a strong pair of central midfielders in Juninho and Marcelo Sarvas. In fact, the Galaxy’s entire midfield was rather strong, deep, and consistent throughout the season.

Gerrard of course instantly becomes the Galaxy’s top midfielder. That too could create a problem upon his mid-year arrival. Dropping a pure attacking player into a squad – as the Galaxy did with Robbie Keane in 2011 – is one thing. Adding a midfielder who will be an influential part of the team to a unit that will have had four-plus months of playing, building, and growing together is entirely different.

Donovan was the perfect DP mostly because he was young. The Galaxy could always count on a great return on their long-term investment. In Gerrard, the club is not in the same position at all. Gerrard will be 35 by the time he joins the club. While he has been relatively healthy throughout his career, he’s had a hamstring issue of late.

Certainly the Galaxy are willing to take on those kinds of challenges. They’re also setting up a potential scenario that sees the club bring in a big-name player every two years. Such a revolving-door type of rotation may not be the best thing for stability.

With Donovan, the Galaxy were able to count on one DP and could take risks on the other. Perhaps the club views Gonzalez as the stable part of the formula. So long as he remains in shape and continues developing, the club will be able to take risks on past-their-prime name players.

The Galaxy were first to five but will another club be straightaway to six? When Donovan arrived, the Galaxy had a single MLS Cup win with three losses in the final. The Galaxy won four of its five titles with Donovan on the field.

Can the Galaxy expect a brand-new player to be the focal point of the team’s playoff drive? Or will that responsibility fall squarely on Keane’s shoulders?

Perhaps Donovan’s decade-long efforts truly transformed the club into one that could not consistently win titles to one with a championship mentality. If so, then a rotation of aging but effective stars will suit the club well.

There is certainly room for more stars above the club’s crest.