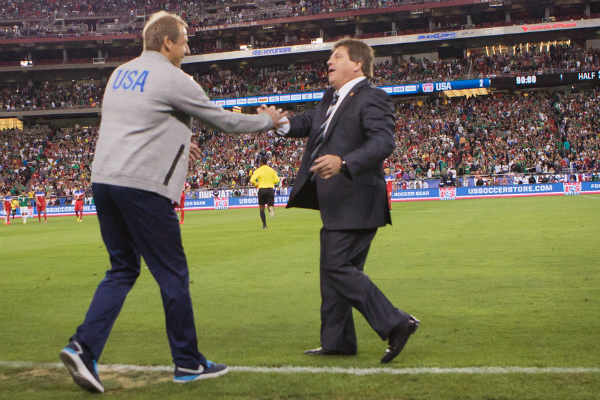 By J Hutcherson – WASHINGTON, DC (Feb 16, 2015) US Soccer Players – The idea that the CONCACAF domestic leagues should be about exporting domestic players is nothing new. The elite playing with the elite makes sense, after all. What becomes more difficult for the CONCACAF countries is integrating what players do with their clubs into what happens at National Team level.

Mexico is the most recent example of a team getting into trouble and opting for a domestic answer. The Club America infused version of Mexico got them into the World Cup after a nearly botched qualifying campaign. Club America turned emergency Mexico National Team coach Miguel Herrera made no apologies for putting the spine of his club team into national team jerseys. It worked, with Mexico moving to a pragmatic response to get to a playoff and the World Cup.

Once there, Herrera returned to the expected all-star style roster preferred by most World Cup coaches in contemporary soccer. Though there are some exceptions, the strength of the available player normally outweighs some tactical idea brought over from a club side. There’s a reason Spain relies heavily on Barcelona and Real Madrid players even when the two clubs play styles with very little in common.

For the teams farther down the FIFA Ranking table, it can work either way. Some lower ranking domestic teams don’t have the caliber of player normally getting deals in Europe. Almost by default, their best domestic league clubs are going to have a lot of domestic players making the National Team roster. It’s in between the teams that can field all-star lineups and those without much choice that we find most of CONCACAF.

This is nothing new for the region, with the push and pull between club and country creating National Teams that might rely on players unavailable except during international windows. That removes the ability for full national team training during a domestic offseason that doesn’t match Europe’s. It also creates a dichotomy between what happens with a club and what happens with a country. A player used to working within a style of play that relies on quality all over the field might not find it back home with his country. What might work at club level might be a step too far with country.

If you happen to be an attacking player, this might be beneficial. Instead of the cagey almost defensive setups European teams with no hope of contending sometimes employ, the national team can allow for freedom. We see this even with some MLS players who are stronger with their country than clubs. It’s no knock against the Costa Rican Primera Division that MLS is a stronger foreign league even within CONCACAF.

Costa Rica’s 2014 World Cup squad had no players from Liga MX, three from MLS, nine from the Primera Division, and the rest of the squad from European leagues ranging from Norway and Russia to La Liga and the Bundesliga.  Jorge Luis Pinto’s job through qualifying was synthesis, the kind of thing that the world’s elite teams don’t necessarily have to spend the same amount of time figuring out. That’s normal for CONCACAF, with the best teams putting players in a variety of foreign leagues.

Mexico and the United States know their best players will seek opportunities elsewhere. The USMNT in particular has a reliance on German-American players with little or no connection to the US youth soccer system. There’s no framework to create an idea of tactics or build on shared experience until those players are in a full National Team setting. It’s the same for domestic players called up later in their careers. That synthesis, the crucial work in a confederation like CONCACAF, happens later than it does with the world’s top national teams.

For all the criticism directed at the level of difficulty in this region, what we’re talking about certainly doesn’t make things easier. Coaches have to work in CONCACAF. There’s a point about the CONMEBOL powers where their coaches have to go to Europe to see their best players in action with their clubs. CONCACAF coaches do the same, but they’re also looking at the leagues of their nearest rivals. It’s not enough to know MLS and the big leagues of Europe. The coaches have to know where all of their options are, what they’re doing with their clubs, and how this might work at international level.

Pick any of the revolutionary tactical moments in world soccer over the last few decades and they almost always lead from club to national team, carried over by a set of elite players. It’s a tactical advantage almost unheard of in CONCACAF where the main job for a coach is trying not to expose the problems with his team.

As we approach the upcoming World Cup Qualifying cycle, starting earlier than it ever has, we’ll hear the same complaints. CONCACAF is a weak region. Appealing for four full World Cup qualifying spots is ridiculous. The level of play even in the Hexagonal Round shows how far weak teams can get. And so on. What that overlooks is how hard it is to coach well in CONCACAF. We’ve seen big name failures here, coaches that couldn’t come to grips with a job that simply requires more. That might not hold up to direct comparisons with other regions, but it’s also not as easy to dismiss as the rest of the soccer world might like.