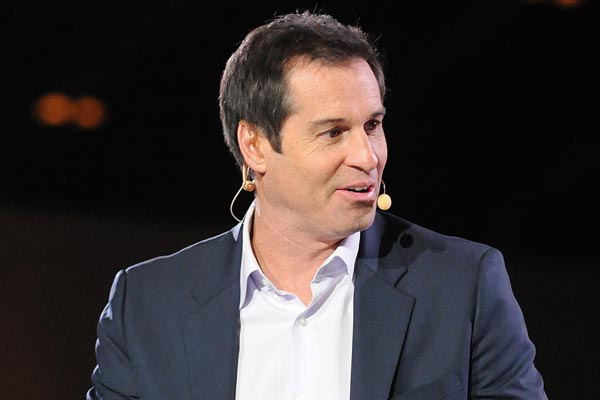 By Charles Boehm – WASHINGTON, DC (Feb 26, 2015) US Soccer Players – As a two-time World Cup participant, longtime USMNT captain, founding member of MLS, and the first American to feature in the English Premier League, John Harkes has climbed almost every mountain available in the sport.

Harkes continues to seek new challenges at age 47, doing commentary work for SiriusXM and beIN Sport, working as a technical advisor to one of the DC region’s biggest youth clubs, and raising his own children in the beautiful game.

USSoccerPlayers.com recently caught up with Harkes to chat about a range of topics within US soccer.

You’ve played, coached and analyzed at every level, but you’re now also a soccer parent. (Harkes’ son Ian is a standout midfielder at Wake Forest University, while his oldest daughter Lauren is set to begin her NCAA career at Clemson this fall.). You must be a busy man these days.

Yeah, it’s always a challenge to get the schedule right – where you’re supposed to be. And of course the No. 1 thing is supporting my kids and the family, so you know you want to make time for that. It’s been trying at times but we make it work here.

What have you learned from watching Ian progress through the developmental system?

It’s always an evolving landscape. You have to embrace it, in a way, to move forward. Certainly, that’s going to be challenges through that process. With Ian, being at DC United Academy and playing at Gonzaga High School [in DC], a good coach, a good system there, he enjoyed it. They’re two different environments, one that you could grow and develop in different ways. He could show more confidence and have a different role when he played at the high school level, different from the everyday focus of high-level academy stuff. You’re always looking to be well-rounded in the game, and I think Ian benefited from that at that time.

There’s so many different pathways for players to get where they want to go. Understanding what the goals are and how to get there – that can be a challenge in itself. He [Ian] has grown tremendously, doing a good job, looks a really fine player right now under [recently-departed Demon Deacons coach] Jay Vidovich. We’ll see. He’s been in with Tab [Ramos] and the U-20s a couple times, and he has ambitions to play pro after school. We’ll see how that goes. There’s a lot of changes coming, he’s got a new coach at Wake Forest as well, Jay stepped in to take the job in Portland and Bobby Muuss coming in. So we’ll see things progress over the next year or so.

Last year you scaled back your broadcasting duties a bit to focus on your coaching career. Where does that process stand at the moment?

I’ve been fortunate to coach at many levels in this country, and have great experiences observing different coaches overseas, so I’m always trying to build up my own education … If I get that opportunity to take it, whether or not I’m willing to take it, but always being prepared, I think is key. I feel like I’m in a good spot right now, doing some technical advising for a youth group in McLean [ Virginia], McLean Youth Soccer. My wife is involved in that as well, in the ECNL academy for the girls side. She coaches teams and she’s an age group director there. I’m a technical advisor with the club, overseeing a lot of different facets there.

It’s interesting because the media [work] is there and I get to do that stuff – I want that flexibility to go and see my kids play, go down to Wake and see Ian play. I have desires to coach, and I love coaching. I love working in with players, the teaching and education side of the game, the psychological approach to the game, which I think is very key for a lot of players, and sometimes becomes undervalued. Even stepping back and doing SiriusXM and beIN Sport at times but still coaching on a day to day with youth groups and managing 17-year-old players, that helps prepare you for everyday stuff. If the NASL comes around, or USL, or even MLS, or some opportunities overseas, I certainly will be open to it and want to discuss it. You just never know.

What’s your outlook on the USMNT at the moment? There’s been a lot of discussion about the team lately, given how early we are in the new World Cup cycle.

They [fans] have to be very realistic with expectations. It is early in the cycle and through this process I think the communication from the players, and the coaching staff, and what’s to be expected at this point, needs to be clear. If you do that, then there’s no guessing games, no gray areas. One thing that was a little bit surprising to me was the way that Jurgen [Klinsmann] kept coming through the media and kind of questioning their fitness and everything else. Maybe it came across the wrong way or taken out of context at times, but through that process he can risk – and any manager, any coach, can do this, any teacher in anything – can lose that trust with the players or your staff.

That whole environment, challenging them through the media, I think it’s better to have those conversations with players themselves. Of course everybody knows that every year around this time, at January camp, that’s what you’re looking to do, build fitness and add games under your belt. So I was a bit surprised that was even being discussed. I thought that was kind of the norm … But the team itself, from Jurgen’s standpoint, if he’s going to open up the opportunity for new faces, new players to challenge themselves and test themselves, and that’s exactly what it should be. It shouldn’t be ‘a little bit of this, a little bit of that,’ it has to be committed to that, this is that time to experiment. Because as you start to get closer to the Gold Cup – he says he wants to win the Gold Cup, and he’s going to want to bring in his stronger team and have players that he trusts and a formation that makes sense.

What’s your take on the recent tweaks to the tactical formation?

I would like to see a little bit more experimenting with the 3-5-2. Abandoning it after only a half [vs. Chile last month], I think a lot of people got disappointed by that, because they wanted to see it a little bit more! But he’s the manager and he knows his players well. He sees them on a day to day basis, so he knows them more than anybody, I would think, at this point. If he sees changes that are needed, he’s going to have to put them in to making sure that it’s clear, concise and the message is going straight to the players.

The question comes with any coach, it doesn’t matter if you’re coaching youth soccer at the U-15s, U16s, or you’re coaching the national team: it’s based on ability, it’s based on the characteristics, traits and personalities of the players … The three [defenders] in that system, you even see it with Louis van Gaal and Manchester United, you see it with [Antonio] Conte when he was at Juventus. It’s a challenge. The three have to be very dynamic, understanding of the space and interpreting space. That becomes a huge challenge for some players. Recognizing, I think, what the system’s all about and what the strengths of the team are. Those tactical changes have to take place – there’s a learning curve for everyone and you have to be patient with them.

As a player, you were part of what some would call a “golden generation” for US Soccer. Do you see similarly talented crops rising through the system nowadays?

I don’t know, that’s a tough one. It’d be a good one for US Soccer. The landscape itself, they should be able to take players that are playing at the [Under-]15s and 16s and IMG Academy at the 17s under Richie Williams, and the 20s with Tab and the 23s now, you want to be pushing the envelope every year. You want guys coming through the system – four to five per year, actually, that are knocking on the door, and I don’t think we’ve been able to see that.

At times we see some players here and there, but on a consistent basis, no, I don’t think we’ve seen that. It’d be great to be better, but I think a lot of nations around the world have that issue, too. Some nations are better than others and at times we also see the cycle go up and go down at certain years. With us, you just look at the history and success of the youth programs – it hasn’t been the best. And we’re hoping to get it better. Guys are working hard to secure further advancement in the tournaments, whether it be the 20s or the 23s in the Olympics.

That winning mentality that you have, and being able to compete in tournament situations with the 20s and 23s and 17s is vital for us to have success as a nation as we get to the senior level. Because now they have the mentality. And when they get used to that type of environment, of winning games, competing in tournaments, then they know what it’s like to step up to the next level and do it, too. They don’t feel that there’s a transition period. There shouldn’t be six to eight months to get used to the senior level and what it’s like to succeed. They already know.

When players are capable of building a winning mentality – through all of their training sessions, their tournament experiences – when you have that experience of winning, you want to have it again and again, every time you step on the field. That, to me, is really important. The technical skills of our teams, you want to be focusing on that, certainly the tactics are important from the coach’s perspective. But the intensity that needs to be there, the focus on the players’ mentality, I think has been lacking in our country, and that’s something that needs to improve.