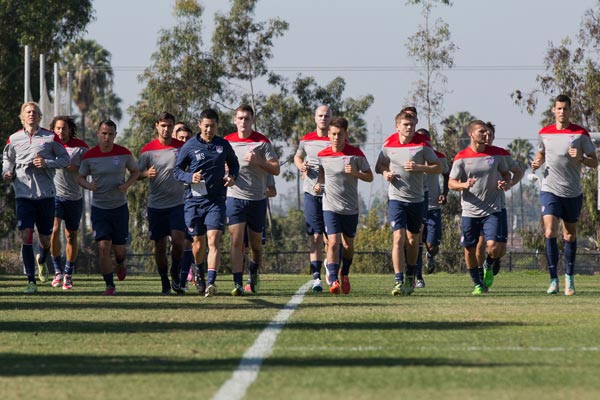 By Clemente Lisi – NEW YORK, NY (Feb 3, 2015) US Soccer Players – Many National Teams have a stadium they call home. England, for example, plays at Wembley, Mexico has the Estadio Azteca, and South Africa has Soccer City. The USMNT, on the other hand, is one of those nations that call an array of venues home.

Need to play Mexico in a World Cup Qualifier? Then there’s Columbus Crew Stadium in Ohio. Need to host a high-profile team like Brazil? Then an NFL venue such as MetLife Stadium just outside New York is the place. What about a friendly at the start of the calendar year? Then StubHub Center, home of the LA Galaxy, is a sure bet.

Previously known as The Home Depot Center, the venue is one of the most-important soccer-specific stadiums in this country and a place where the USA has been very successful in the past.

StubHub Center is located in Carson, about 16 miles from downtown Los Angeles. It sits on 125 acres of land on the campus of California State University at Dominguez Hills. The picturesque complex includes beautifully manicured training fields, tennis courts, and a track and field facility. The parking lot is great for tailgating and palm trees are a nice backdrop to any soccer game.

“Yes, I’d favor the StubHub being the official stadium for the USMNT,” said Carlisa Perdomo, who serves as the president of the Galaxians, the official fan club of the Los Angeles Galaxy.

Home to the Galaxy since 2003 (and Chivas USA until its demise last year), the complex cost $87 million. Over the past 12 years, the 27,000-seat venue has served the USMNT – and soccer as whole – quite well. For MLS, it was the site of MLS Cup three of the last four years and six times overall. It was also the venue for the 2003 MLS All-Star Game. StubHub has also hosted games from four previous Gold Cups and will do so again this summer. It’s where players such as Landon Donovan and David Beckham made soccer history.

USMNT Jurgen Klinsmann was familiar with the facility before taking over the National Team. Klinsmann was a technical advisor with the Galaxy in 2004. In a 2004 interview with FIFA.com, Klinsmann said the stadium “rivals anything you’ll find in Europe.”

MLS might have changed since the opening of the venue over a decade ago, but it’s still in the elite category of soccer facilities. It’s not just a stadium with fields dedicated to MLS and the USMNT. The National Team trains on Glenn “Mooch” Myernick Field, the main field at the National Training Center that’s part of the complex in Carson.

Just last week, Galaxy players reported to the venue for preseason physical exams, while the USMNT continues to train during its annual January camp following its 3-2 road friendly loss to Chile. The USMNT takes on Panama on February 8 in another crucial warm-up ahead of this summer’s Gold Cup and qualification for the 2016 Olympics.

Jozy Altidore, who recently returned to MLS after signing with Toronto FC, said he is ready to rebound from the Chile loss.

“I’m excited to play at home, it’s always fun. It’s my first time playing in California in a long time so I look forward to it, but most important we need to win that game,” Altidore said. “I think it’s a game where everything is kind of in our favor and hopefully we can start our first game at home with a win.”

The USMNT is 7-2-2 all-time at StubHub Center. The last time at StubHub, the USMNT defeated South Korea 2-0 in a January friendly. The USA has also outscored opponents 30-9 in that span of matches. Also feeling at home will be Panama goalkeeper Jaime Penedo, who plays for the Galaxy and was part of the team’s recent MLS Cup run.

Given the USMNT’s ambitious schedule this year, playing at StubHub Center it will be both a respite and an opportunity to once again play in Southern California at a stadium that has brought it lots of success in the past. It’s not THE home field for the USMNT, but it’s certainly one of them.