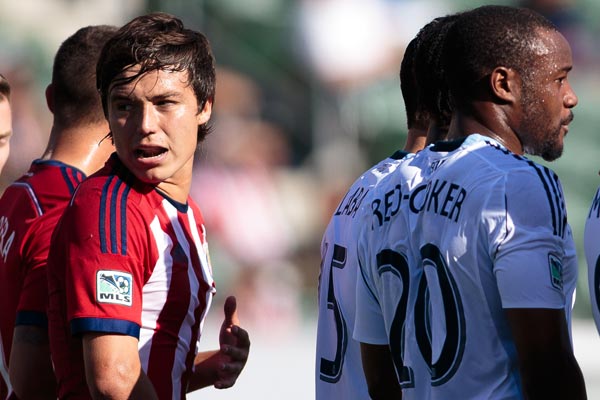 By Luis Bueno – CARSON, CA (Feb 4, 2015) US Soccer Players – Facing a struggle against relegation, Chivas Guadalajara received what looked like a boost in the offseason. Fresh off a 15-goal season with a bad Chivas USA side, Erick “Cubo” Torres seemed like a godsend. The talented 21-year-old who had earned rave reviews along with a call up from the Mexican National Team was theirs on loan for the 2015 Liga MX Clausura season.

However, with a quarter of the schedule gone, Torres has had no impact on the club’s most important season in recent history.

Torres’s return to Guadalajara has not yielded anywhere near the impact many MLS observers would have guessed. His quick rise within MLS made him a sought-after commodity, particularly after Chivas USA folded, but to Chivas manager Jose Manuel “Chepo” De La Torre, Torres is excess weight.

What makes this more maddening is not his idle time on the bench during league matches but where he gets playing time. Torres has scored goals for both Chivas’ U-20 team as well as in a Copa MX match. His latest tally was an 80th-minute header against Lobos BUAP in a 2-0 win on Tuesday, his first goal in three Copa MX matches

Certainly, Torres has talent. Experience too. How about an opportunity?

Were he trying to win a spot with America or Santos or another successful club, Torres’ situation would be understandable. Those clubs are not in the position Chivas are in. Chivas are desperate. The club has earned its spot near the bottom of the relegation table with years of poor results, which has led to a lot of turnover both on the roster and within the coaching staff.

Yet, De La Torre is unwilling to take a chance on Torres. A chance is what Torres would be, not a risk. Torres showed in less than two seasons what he could do. He scored seven goals after joining Chivas USA in the middle of the 2013 season and finished tied for seventh in the league in goals. He also scored a goal for Mexico in a friendly against Panama in October.

De La Torre has counted mostly on Omar Bravo for goals. Bravo had a lackluster campaign a season ago, scoring just four times. Sure, Chivas were poor and that contributed to his low output but Torres has been in a similar situation and found a way to succeed. Also having chances to play are Carlos Fierro and Isaac Brizuela, but neither has found the back of the net. Fierro was involved in a bit of controversy on the weekend. Fierro drew a penalty which led to the winning goal in the 1-0 triumph over Pachuca on the weekend, but was subsequently suspended a match for having feigned a foul on the play.

Torres may well be victim of a logjam in the attacking third, even though he has a lot of qualities in his favor. That he came from MLS is likely of no significance, since former Real Salt Lake defender Carlos Salcedo has stepped right into a starting spot and has looked quite strong for the club since his arrival.

Perhaps the black cloud of despair that hung over Chivas USA clings to Torres. After all, Chivas USA players who left MLS for Mexico never had great success – Francisco Palencia notwithstanding. Francisco Mendoza and Juan Pablo Garcia had success in MLS but crashed and burned when heading south of the border. Isaac Romo managed to piece together a decent career, decent only for its longevity, but otherwise the returns have been few.

Regardless, Torres’ plight will only last a short amount of time, of course. Torres is on loan to Guadalajara from Houston Dynamo. Should the pattern continue the club could receive a hungry and fresh player over the summer.

Torres himself seems to be content with his place on the squad. After scoring his goal against Lobos, Torres raced to a corner flag, a large smile spread across his face, twisted and twirled like a robot, and then kissed the Chivas shield on his jersey.