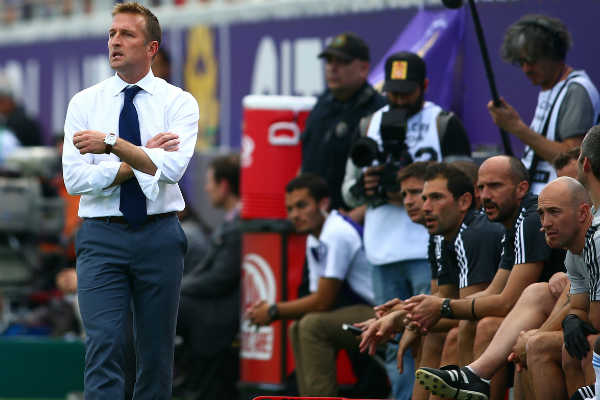 By Clemente Lisi – NEW YORK, NY (March 13, 2015) US Soccer Players – It’s always a great fan experience whenever a team from Boston travels to New York. Think Red Sox taking on the Yankees in the Bronx and what ensues is a rivalry that has only grown over the decades. Come Sunday, a new rivalry between the two cities will commence when New York City FC hosts the New England Revolution at the landmark baseball stadium before a national audience on ESPN2.

The old cliché “build it and they will come” is the perfect way to describe the budding fan following of NYCFC, which will be making its home debut. Whether fans are tired of the hapless Red Bulls or don’t want to journey across the Hudson River to New Jersey to take in a game, NYCFC has turned into a wonderful alternative for Big Apple soccer fans.

Owned by Manchester City and the New York Yankees, NYCFC is an expansion team with plenty of ambition. The team boasts the likes of David Villa and Mix Diskerud and is not shy about challenging its New York rivals – or any other club in Major League Soccer – for a chance at the title. However, unlike other MLS franchises that sprouted up because of a demanding fan base (think Philadelphia and Sons of Ben) or a pre-existing minor league club (like Seattle, Portland and Orlando), NYCFC’s following came after the team had already been created.

Despite any lack of tradition, the fans continue to flock to the team, which already has 15,000 season-ticket holders. In addition, NYCFC’s official fan club, The Third Rail, has also seen its numbers grow to over 2,000 members. Named after the system that powers the city’s iconic subway system, its members have a lot of enthusiasm. Third Rail president Chance Michaels told Soccer America that the group started on May, 21, 2013, the same day MLS announced NYCFC would join the league.

“It was a loose group that connected through social media,” said Michaels, who started a blog that day. “My first entry was something like, ‘Well, we have a team.’”

What the team lacks in tradition and trophies, it more than makes up with vocal supporters. Check the celebrations in the stands at the Citrus Bowl last week against Orlando City SC. They’re not shy about voicing their opinions. The postponement of Frank Lampard joining the team didn’t pass unnoticed by the support. Overall, the members have been positive, hosting pub crawls and watching the embryonic team’s preseason matches.

When it comes to hyping the team, even the players are not immune. Diskerud, appearing at a jersey signing event in Times Square earlier this month, told reporters, “Right now, I just have a message for all New Yorkers: New York City FC is your team.”

NYCFC coach Jason Kreis, no stranger to large fan followings during his time at RSL, said he is “extremely excited” about having the team play at Yankee Stadium, which configured for soccer will set aside 27,000 seats. As a result of swift ticket sales, the team has opened the upper deck for its home opener.

“We have had fantastic support throughout our preseason,” he said. “For the team and for me, playing in front such a large crowd at Yankee Stadium is going to be very special.”

Special yes considering the team and fans didn’t exist until recently. The difference is that the fan base appears somewhat artificial, not organic like in other cases where MLS has granted cities a team. It resembles more what the league did when it awarded Los Angeles a second team in Chivas USA (and we know how that ended). Whether the fan base will sustain itself – and even grow – depends a lot on how successful NYCFC will be this season. That might be asking a lot of an expansion team, but it’s part of the scenario for MLS in Yankee Stadium.

What we already know is that NYCFC fans will pack the stands Sunday afternoon to cheer on their new club. The passion is fueled in part by novelty. Success on the field as soon as possible certainly helps. Only that success will keep fans coming.