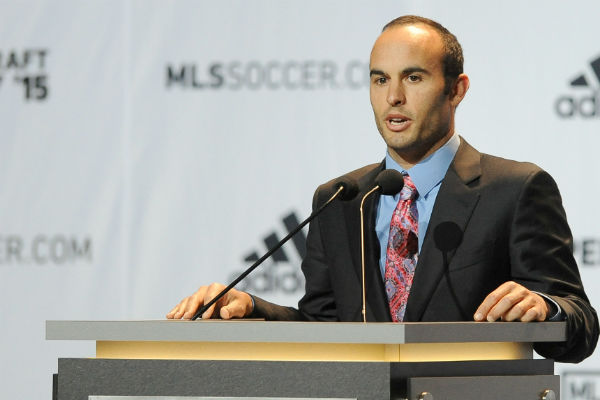 By Charles Boehm – WASHINGTON, DC (Mar 13, 2015) US Soccer Players – Landon Donovan. The name alone has been uttered so many times recently that the mere mention of it atop this paragraph will probably led a few readers to close their browser windows. It’s hardly fair to the man himself, but some carry lingering fatigue from the (more or less) thousands of lavish and sincere going-away tributes upon his retirement last year.

The USMNT icon is one of the few genuine superstars who’d honestly say that he himself would probably be logging off under those circumstances, too. After more than a decade and a half of nearly uninterrupted duty for his nation, his clubs and the very cause of soccer in America, Donovan – though endlessly gracious, and earnest – grew weary of facing the relentless cameras and microphones year after year.

Last fall he emphasized how keen he was to move along from the daily duties of a player, and he set off on a series of globe-trotting adventures almost immediately after his LA Galaxy won the 2014 MLS Cup. But as Major League Soccer lifted the curtain on its 20th season last weekend, Donovan made a quick return to the hearts and minds of US soccer viewers. Appearances on not one, but two of the networks broadcasting under the league’s new television deal put him right in the thick of match day coverage when the 2015 campaign kicked off.

It’s probably safe to say no one expected him to turn more heads with a cameo for UniMas, MLS’s main Spanish-language platform this year, than his spot with Fox Soccer on Sunday.

Appearing alongside Marcelo Balboa, a USMNT legend of a different vintage, Donovan chatted about the new season on Univision’s pregame show and provided a window on his own conflicting emotions at that moment.

He did not attempt to hide his gringo accent, nor the fleeting instant where he picked an imprecise word, then quickly corrected himself. He kept it simple, was quick with a smile and somehow connected with his colleagues, and much of the TV audience, all the same. It’s a phenomenon often experienced by overseas travelers. By bravely extending himself in a less familiar setting, Donovan gave us an honest, compelling glimpse of his true personality.

Donovan wouldn’t want me or anyone else to laud his Spanish punditry as worldclass – not yet, at least. Instead, it’s his ability, and willingness, to comfortably hop between the nation’s two most popular tongues should serve as a role model to us all.

When he appeared as a “guest analyst” on Fox’s Sunday MLS programming in his primary language two days later, he got a more mixed reception. Not so much because the quality of his contribution to the coverage was any less valuable – Donovan seems to grow more incisive with each moment he spends on camera – but due to the inevitable fact that he was connecting with a different audience with different expectations.

Much of American soccer looks at Donovan in terms of what he is NOT, rather than what he IS, that it threatens to color perceptions of him for long after his retirement. However, many Latinos, even those who root for Mexico and other teams he put to the sword over the years, see something slightly different: A “guero,” yes, but one who grew up around their culture, took the time to learn their language and reflected their soccer values in his playing style. Later in the weekend, it was striking to see “Republica Deportiva,” Univision’s quirky weekend sports show, base an extended comedy sketch on Donovan’s Spanish segment.

It’s unclear how often Donovan will appear for Fox, and he might well not feature in a Spanish-language pregame show for a long time to come. Should the broadcasting work inspire him enough for it to become something more than a part-time diversion, he clearly has the tools. In fact, his plainspoken attitude will serve him well once he masters the power and precision of it.

For many years, Landon Donovan carried the roles of USMNT spokesman and pitchman on his shoulders, and it often seemed a heavy burden. Now, perhaps, he can craft a different sort of relationship with the public eye, on his own terms. For most of us, that’s certainly worth tuning in for, isn’t it?