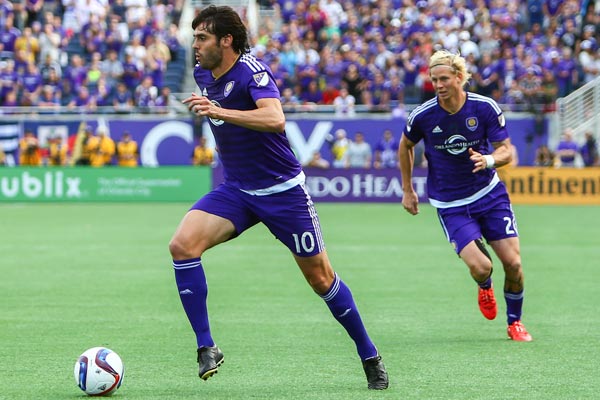 By Tony Edwards – San Jose, CA (Mar 31, 2015) US Soccer Players – There’s a story that back in the 1970s a Warner Brothers executive told whoever was coaching the Cosmos that they weren’t paying Franz Beckenbauer all that money to play defense. Easy solution, move Der Kaiser into attack. Whether that’s apocryphal or not, it’s easy to look at a random piece of data and wonder why the execution doesn’t match up to the initial plan.

This week’s ‘we aren’t paying you this money to play X’ is probably Orlando City’s Kaka, who lined up on the left side of midfield in the purple team’s 5-4-1 formation. If you looked at that starting position, and his heat map on Whoscored.com, you’d probably wonder why he wasn’t playing more centrally. His heat map shows brightest just to the left of the midfield circle.

However, just like moving Beckenbauer forward in the formation just limited the amount of room he had, citing Kaka’s starting position or heat map doesn’t really tell you how effective he’s been so far this season.

First, Orlando’s formation worked out to be a more like a 3-4-3, which is yet another data point for the ‘formations are just starting points’ discussion. Does anyone ever really think formations aren’t just starting points or a way to frame discussions? I think that with more than 100 years of worldwide data, we can all agree soccer is a fluid game. While Kaka did ostensibly line up on the left, and occupied the left side much of the game, only forward Pedro Ribeiro played in a more advanced position than Kaka.

Who touched the ball more in that game than Kaka? No one, his 76 touches was the most in the game, along with four “key passes,” a goal, and an assist. Let’s contrast this with the fact that no midfielder for Montreal had more than 50 touches during the game. We could also mention that Montreal committed 23 fouls during this game, compared with 13 for Orlando. Obviously, Montreal didn’t aim all of those at Kaka.

Regardless, it’s probably not a good strategy to give away free kicks in your own half to Orlando while Kaka is on the field. Not an earthshattering conclusion by any means, but looking at the numbers, one is inclined to wonder if teams aren’t more likely to foul Orlando just because they’d rather get organized than give up even the chance that the ball might find Kaka or Ribeiro.

All that’s not to say Kaka’s preseason prediction that Orlando City would go all the way in its first season is that much more likely to come true. Those goals Montreal scored Saturday against Orlando? First ones Montreal has scored all year in MLS. This line from Orlando City’s website probably tells us all more than we’d like about MLS in 2015.

“The Lions took the initiative with the score at 2-2, but neither team forced a save from the opposition ‘keeper.” Presumably the writer means from the 30th minute until halftime. The second half was mostly Montreal, at least in terms of possession. Also, we’re probably being harsh on Orlando because of the players they missed on international duty. Then again, when you sign internationals, you understand the trade-off.

You don’t have to look too hard for positives around Orlando so far. We haven’t seen a Sunday at 5pm game in the summer yet (presumably all of the League of Choice’s broadcast partners want some Kaka). Most of the would be contenders in the Eastern Conference are off to stuttering starts. Looked at that way, the team’s five points in four games might be considered disappointing. It’s also probably folly to think the current starting lineup will be the lineup during the business end of the season.

A month into MLS’s return to Florida, it’s difficult to be too sour. There’s plenty of time for Orlando City to work out how to overload the side of the side of the field away from Kaka so he has more space when he receives the ball. There’s the whole ‘let’s keep Kaka on the field’ issue, as well and how Orlando adjusts to the games he misses will be interesting.

There were eight teams last year in MLS averaging less than 1.25 points a game. And while it took 49 points to make the playoffs in the Eastern Conference last season, Philadelphia finished sixth with 42 points (1.24 a game). 6th-place makes the playoffs this year. Do you want to be the team in a knockout game against Kaka?