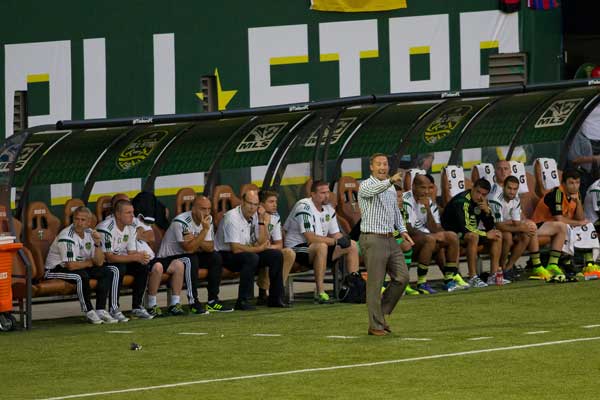 By Jason Davis – WASHINGTON, DC (Mar 20, 2015) US Soccer Players – Caleb Porter is many things to many people.

As head coach of the Akron Zips, he was a phenom, a coach who managed to turn a college program into a standard-bearer of American soccer. Under Porter, Akron not only churned out future pros at a stunning clip, but played a brand of soccer rarely seen at that or any level in the United States.

As head coach of the US Olympic qualifying team in 2011, he was a failure. The coach on the sideline as an extremely talented group of players came up short on home soil. Porter took his fair share of criticism for both the makeup of that team and how he deployed it.

As the head coach of the Portland Timbers, he is an enigma. Hired out of Akron with a mandate to bring to the Timbers his possession-, passing-obsessed style, Porter took his team to first place in the Western Conference in 2013 only to fall short of the playoffs in the heat of expectation the very next season. It’s open to debate whether or not he did that by playing his style his way.

The question might now be moot. It seems the former wunderkind of the American coaching scene has learned a lesson about the professional game. Whatever particular philosophy a coach brings with him (and who doesn’t want to emulate Barcelona, after all), the need to win games has a pernicious ability turn committed aesthetes into practical men. The irony about the change in soccer philosophy is that it seems to have made Porter more philosophical about how to achieve success at the highest level.

“The biggest thing I’ve learned the last several years is you don’t always need to decide the game with possession,” Porter told Sports Illustrated’s Grant Wahl in a recent interview. “You can decide it without having the ball sometimes and use that to your advantage. Sometimes you can decide it by dumping the ball up to your big man, and that’s why we went and got one [Adi].”

Before getting into whether Porter’s shift in mindset is troubling defeatism or simply the sign of a maturing soccer mind, consider his role within the context of American soccer.

Despite the Olympic failure, Porter has long been the something of a golden child within coaching circles. As the game grows in the US, coaching has lagged behind (at least in terms of perception) as an improving area. Players jump to Europe and spread the gospel that Americans can play, but coaches are more limited in their opportunities. The Old Country’s proving ground isn’t an easy route for the best and brightest American coaches, making it tougher for Americans to believe that Americans can coach. Draw your own conclusions on how this relates to Jurgen Klinsmann, USMNT head coach.

Bruce Arena might have an opinion about this phenomenon. Despite Arena’s long run of success both at the club and national team level, his reputation suffers because of his nationality. A European coach who wins multiple domestic titles before taking a lowly regarded nation to the quarterfinals of the World Cup gets jobs offers, in Europe. An American who does the same returns to Major League Soccer. Throw in that Arena is a better tactical coach than his reputation, and none of this is very fair.

Porter led teams with distinct tactical identities who valued possession. It’s no coincidence that first Kreis, then Porter, were tabbed as America’s first coaching stars (and best bets to break the European glass ceiling) just as the soccer world was fawning over the tiki taka of Barcelona. Possession soccer meant sophistication. That made Porter sophisticated.

Porter’s move to a more practical notion of what it takes to win is probably a good thing for his career, long term. He’s not giving up on possession, he’s simply acknowledging that tactical flexibility is better than rigid dedication. But the move might impact the widely held belief that he’s something of a rising star who could one day do for American coaching what players like John Harkes and Brian McBride did for American players.

We’re not ignoring Bob Bradley, another American coach who suffers from the misplaced perception he’s not an astute tactician. It might actually be Bradley who breaks through in a major European league, not Porter. There would be a bit of irony in that, considering the public’s view of Bradley during his tenure with the USMNT.

Porter is probably no longer a phenom. A couple of seasons in a difficult League like MLS, with its notable ability to humble even the smartest coaches, will quickly take the sting out of such a notion.

Is a more practical Caleb Porter less interesting? Probably. He’s certainly less attractive as a candidate for American soccer’s chosen one. Yet, the lesson he has learned, and the application of that lesson, are likely to make him a better coach in the long run. It will make him a more successful coach in MLS.

There are much worse things, even if MLS success doesn’t lead to European glory.