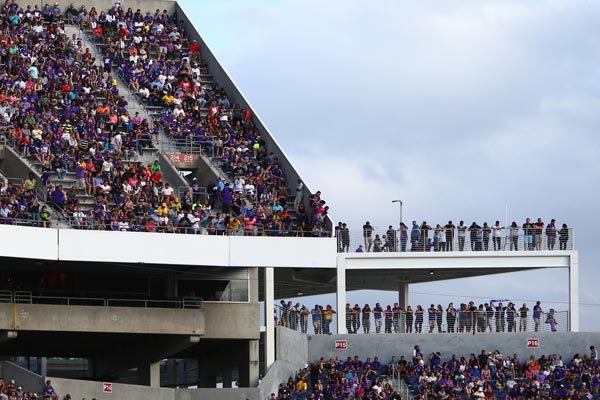 By J Hutcherson – WASHINGTON, DC (Mar 9, 2015) US Soccer Players – Orlando City and NYCFC, two teams that feel like they’ve been in MLS for years, finally played a game that counts. Fortunately for both, it was the kind of game that could setup a quick rivalry between the two teams. Kaka’s late goal made the home crowd happy, leaving NYCFC with plenty to think about. It’s not a bad setup for their next encounter.

“Sometimes the game goes like that,” NYCFC midfielder Andrew Jacobson told his club’s official site. “At the end of the day, we got a good point on the road in a pretty hostile environment. It’s a very good place to start and it’s going to get better from here.”

That could also hold true for NYCFC vs Orlando City games in general, with Orlando City already showing that they can draw fans. NYCFC’s turn comes against the New England Revolution this Sunday, with Yankee Stadium turning from an exhibition stadium for soccer games into an MLS regular season venue.

It’s not fair to compare earlier expansion cycles when two teams entered the league at the same time. Chicago outclassed Miami early, but it was Miami showing promise in their final MLS season. Anybody who saw that last Fusion team knows why people still bring it up as perhaps the greatest MLS ‘what might have been.’

The next time MLS added two teams in the same year, it was filling out the old Pacific Northwest territory that existed in the original NASL era. The region was a known quantity for soccer, with all three teams moving up from a lower league. Again, that makes it hard to compare with Orlando City and NYCFC, teams from different regions of the country with one of them paying for the MLS version of promotion.

Even attempting to connect NYCFC with the theory behind the Chivas USA expansion doesn’t work. Chivas USA, at least in theory, was connecting an MLS team to Mexican club soccer. NYCFC, again at least in theory, isn’t an overt homage to Manchester City. Uniforms and shared players aside, this isn’t an attempt to attract New York area Premier League fans hoping they forget that they don’t care for Manchester City.

NYCFC supposedly has a built in rivalry already with the team that’s in the same metropolitan area. The Red Bulls loom as the likeliest ‘us vs them’ scenario, but it doesn’t always work that way in North American sports.

After Major League Baseball adopted inter-league play, they faced their own rivalry problem. The design for the cross-league games was to match teams kept apart by the two-league system. At the same time, baseball hoped to build rivalries out of American League and National League teams that play near each other. Sometimes, it’s not a problem. Other times, it stretches the definition of rival even after years of playing games that count.

MLS has run into the same problem with some of their attempts to create rivalries. As is normal in professional sports, the rivalries pushed to the forefront by the fans tend to carry the most meaning. A look at the MLS rivalry weeks attaches a cup or a name to games that may or may not setoff the local supporters. Some make perfect sense, others are on their way to legitimacy. A couple are very much works in progress.

Into that mix, the league opted to leave Orlando City out of it altogether. It’s a safe assumption that the Atlanta MLS team will eventually find themselves matched with Orlando City when they join the league in 2017. NYCFC doesn’t have to wait. The Red Bulls are too close, the matchup too obvious. Though the New York Metro derby doesn’t have an official name, it leads the list of MLS rivalry games in 2015.

The Red Bulls also have the Atlantic Cup with DC United, an obvious rivalry from the earlier era of MLS when they were the two teams on the I-95 corridor. Why the New England Revolution are rivalry free is an interesting question considering their proximity and hostile sporting relations with New York City.

Meanwhile, Orlando City and NYCFC enter the league at an interesting time. The money is up due to expansion fees, TV rights, and sponsorship. Both represent something that wasn’t the MLS expansion ideal only a few years ago. They’re not joining the league in purpose-build soccer stadiums. Though Orlando finally returns MLS to the Southeast, it’s in a state that already lost two MLS teams. NYCFC’s host of issues leading up to their MLS debut don’t need reciting.

The two have more in common than a shared market. They’re both attempts to see if older ideas still work or even can work. Orlando City is the next team under the economic promotion model the league first used with the Seattle Sounders. NYCFC is a less overt version of what MLS tried with Chivas USA. With that in mind, Orlando City has more in common with the Cascadia clubs than they do with the rest of MLS. NYCFC is an open market, with no built in history or rivalries except proximity.

Whatever antipathy the Red Bulls and NYCFC may eventually have, it certainly doesn’t feel like a rivalry. The two have already done a loan and trade deal. The Red Bulls have so far been gracious neighbors. Whether or not the two clubs’ supporters follow management’s lead is an open question.