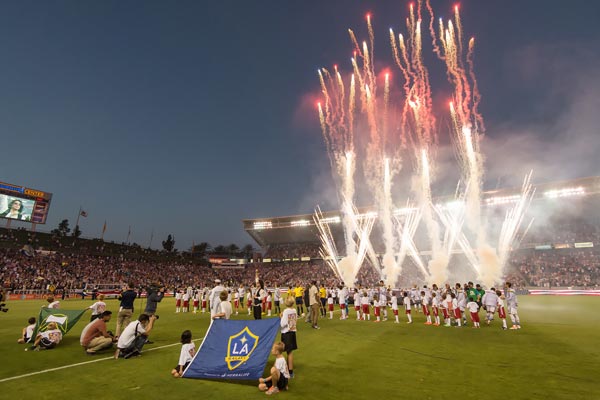 By J Hutcherson – WASHINGTON, DC (Mar 6, 2015) US Soccer Players – It’s easy enough to pick a favorite to win the 2015 MLS Cup. Go with the defending MLS champions. As many have already explained in detail, the LA Galaxy did what they needed in the offseason and slot right in as the preseason choice. They could lose 4-0 at home to Chicago on opening night and that doesn’t change. However, it doesn’t make them the most interesting MLS team in 2015.

MLS hasn’t turned the corner on a basic perception problem. If you want to see higher caliber soccer, watch the Premier League, La Liga, Serie A, or the Bundesliga on Saturday morning or Liga MX that night. MLS exists in a crowded soccer market on American television. For the most part, what MLS sells is proximity and familiarity. There’s certainly nothing wrong with either of those. If an American sports fan isn’t interested in latching onto a team from a city they’ve never lived in and probably don’t know anybody from there, MLS fills that gap. We all know the reality, even in the beginnings of the ‘league of choice’ era.

Right now, what MLS fans choose is proximity and familiarity as the one main differentiator between here and there slowly changes. In the world of professional soccer, quality costs money. Significant amounts of it, pushing winning ahead of business models and financial responsibility. It is a game, after all and everybody knows the score.

Where this leaves the majority of MLS clubs is the pressure to stay on budget. The exceptions to the salary cap aren’t in play for every MLS club. That’s by choice, letting the handful of clubs willing to spend do just that. It’s the pragmatic bent of some MLS payrolls that should create an obvious disparity in the league. The clubs that spend should see their reward. The MLS version of super clubs should pack the top of the conference tables and hammer away at each other in the playoffs.

None of these teams is the most interesting in MLS. That the league hasn’t strictly become a pay to play league relying on a handful of elite players undoes something the league likes to stress. If they paid players more, they would be paying different players. The results suggest a different reality, where the best MLS coaches and the best players do make teams title contenders but they’re not alone at the top.

The New England Revolution keyed their turnaround on an odd allocation that got them Jermaine Jones late in the season. Still playing as a midfielder, Jones helped revitalize a New England team that looked strong in April and May only to undo those results in June and July. New England in 2014 might be the prototypical story for an MLS team. There will be consecutive losses, the kind of thing that would throw a European team into crisis as they slid down the table. Except in MLS, teams normally have time. New England responded to losing eight games in a row by only losing one after August 2. They did it while players already on their roster turned themselves into club stars.

In 2015, the Revs are a known quantity. They took the 2014 MLS Cup final to overtime. Lee Nguyen ended up on the USMNT roster. They’re undoubtedly favorites in the Eastern Conference. That makes them less interesting than they were last August when results started going their way.

Without bringing in big name designated players, the Chicago Fire‘s rebuild is certainly interesting. Chicago replaced half its roster, signed unfamiliar designated players, and made it clear things were changing. Maybe, but believing in Chicago requires believing in Frank Yallop. His time in Chicago makes that difficult. It’s the same situation for his former assistant Dominic Kinnear with his return to the San Jose Earthquakes. Those great San Jose and Houston Dynamo teams built on players that quickly became MLS household names. Scouting within the league might not be any better than it was back then, but the number of teams makes it harder to build that kind of team. Relying on imports in their first MLS season like we’re seeing in Chicago is a big ask in 2015.

Meanwhile, Houston has an imported coach with former Bolton manager Owen Coyle in charge. Whatever learning curve there is in MLS requires experiencing an American summer. If you’ve ever moved from one part of the country to another, you learn a few things. It’s much hotter in places like Chicago and Columbus than you might expect. Flights are long. Airports and hotels start to look familiar. That process is interesting because it could help to establish MLS as a landing place for coaches with English managerial experience. That could change the scope of a team, revamping methods and expectations. That’s of interest to the entire league, even if it doesn’t make the Dynamo the most interesting team in MLS.

For 2015, that unofficial title goes to the Montreal Impact. Why should anybody outside of Quebec care about an MLS team that finished last in the East and only one six games? There are a couple of reasons.

Montreal’s investor/operator is one of the only people with a stake in MLS contradicting the league’s onward and upward narrative. Joey Saputo is well aware his team lost fans last season, and with it the “buzz” in the city that’s dropped his team down the ticket sales chart.

Strong words, especially coming at a time when the Impact were trying to sell tickets for their CONCACAF Champions League quarterfinal game against Liga MX club Pachuca. It’s the CONCACAF Champions League that helps turn Montreal into the most interesting team in MLS. Their fans responded, buying over 35,000 tickets to see the Impact advance. The willingness from that many people to watch soccer… in Montreal… in early March… during a rough winter. Montreal answered Saputo’s challenge, showing that this is a market that listens to its soccer team.

Now, a revamped version of the Impact is the only MLS team left in the CONCACAF Champions League. They play Alajuelense in the semifinals in a game with its own symbolism. Alajuelense knocked out DC United, a team that salvaged a dismal 2013 season by qualifying for the Champions League through the US Open Cup. Montreal did the same last season through the Canadian Championship.

A Costa Rican team knocking off two MLS teams in a row is a knock against MLS itself. Even if Champions League favorites Club America wait in the final, getting there is enough for the Impact. It’s a restatement of purpose with quick results to back it up. It’s also the story of the most interesting team in MLS in 2015.