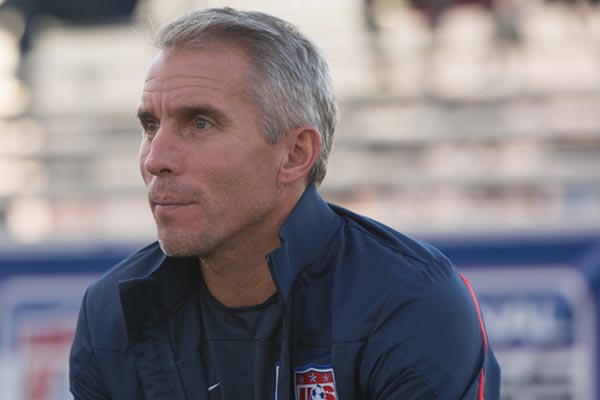 By Charles Boehm – WASHINGTON, DC (Mar 3, 2015) US Soccer Players – The USMNT U-17s began their World Cup qualification campaign in solid, steady fashion. The USMNT won their first two matches at the 2015 CONCACAF U-17 Championship in San Pedro Sula, Honduras to take an early lead in the race for one of four places at the World Cup this fall in Chile.

Wins over Cuba on Friday and Trinidad & Tobago on Monday represent a bright enough start for a talented group. However, the trickiest tasks lie ahead for coach Richie Williams’s squad, which has carried optimism and lofty goals on the journey to Central America. Three games in seven days against Guatemala, the host nation, and Jamaica will decide whether qualification is the breeze many expected, or rougher sailing.

Grooming talent for the senior squad remains job one. While it’s easy to say that player development trumps wins and losses at this age, progressing as far as possible down this year’s road is an inescapable ingredient in these prospects’ maturation.

“Our goal is to produce and develop players to move on to our U-20s, our U-23s and our senior team. The group that we have, we do feel are very talented and have developed very well over the last year, and we believe that’s going to happen,” Williams told USSoccerPlayers.com by phone from Honduras. “Our goal now is to qualify, get a great experience for them here in qualifying and then get them a great experience at the World Cup in Chile.”

This group has garnered a number of positive results together, and more of its players are already in professional environments – including illustrious names like Borussia Dortmund, Fulham, and Monterrey – than perhaps any U-17 selection in US history. The same potential that fires up fans of the senior national team can also become a millstone around young players’ necks when things don’t go as planned. That’s happened with several youth national teams in recent years.

“The main thing we have to remember is, they’re still youths,” said Williams. “They’re still young. So these tournaments are a big deal for these guys. There’s pressure.”

The burden of expectations almost certainly played a role in the last crop’s inability to book their place in the 2013 FIFA U-17 World Cup. Much the same can be said for the U-23s’ ill-fated 2012 Olympic qualifying campaign and the U-20 group that crashed out of their CONCACAF tournament in 2011. The current U-20s stumbled in Jamaica earlier this year, but accomplished their mission in the end and can now benefit from the multifaceted education of a major international tournament.

“It’s not easy for these players and teams to come down to play in these places – people on the outside have never experienced coming to a place like Honduras,” noted Williams. “Countries where there are difficult field conditions, the refereeing can be an issue, all the teams want to beat the United States. Heat and humidity. These all sound like excuses for why we weren’t successful in the past, but it’s reality.”

Until the 2013 edition, the United States had qualified for every single U-17 World Cup, dating back to the event’s origins in 1985. The most famous, and successful, team was built from the 1982-born crop that marked the outset of US Soccer’s grand experiment with the Bradenton Residency Program, led by the likes of Landon Donovan, Oguchi Onyewu, and Kyle Beckerman.

That squad reached the semifinals of New Zealand 1999, finishing in 4th-place, a feat that has yet to be matched by their successors. In fact, Williams’ group faces something of a glass ceiling. Staffed with talent like Jozy Altidore and Omar Gonzalez (2005), Brek Shea and Greg Garza (2007), and Luis Gil and Juan Agudelo (2009), the US has repeatedly advanced out of the group stages over the past 15 years. What they haven’t done is win a knockout match since that “golden generation” did so at the dawn of the “Project 2010” initiative.

“When you start comparing groups, especially at these young ages, everyone speaks about the first class, which obviously had Landon Donovan and DaMarcus Beasley, and those two players went on to incredible careers and three, four World Cups,” said Williams. “But there’s been other good classes and other good cycles, too.

“It’s a great learning experience for all these players and teams,” he added. “They’re still gaining great experience for hopefully later on when they move on to older national teams…. Our ultimate goal is for our senior team to qualify for every World Cup, and eventually win it.”

Williams, who has manned his post for three years now, thus finds himself juggling disparate priorities. His charges are growing up faster than ever before, and perform under a spotlight that grows a bit brighter with every passing year.

Some challenges remain as rugged as ever. Over the next several days, the USMNT plays against two of CONCACAF’s trickiest foes, including a Honduran side that may be desperate for a victory in front of their home fans on Sunday.

Negotiating this stretch will keep the USA’s fate in its own hands for the group-stage finally against Jamaica, where an automatic qualification berth could move within reach.

“Qualifying, it’s the ultimate game of results,” Williams said. “Being the U-17s, a large part of what we do here is development – we’re not always stressing results, but obviously [the players] understand now that we need results now to be able to qualify for the World Cup.”