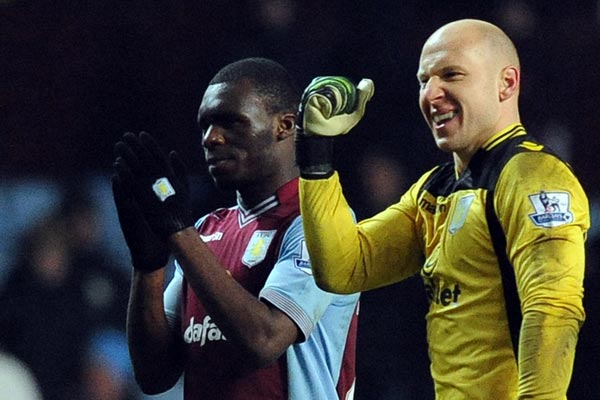 By J Hutcherson – WASHINGTON, DC (Apr 9, 2015) US Soccer Players  – Tim Sherwood doesn’t hide his feelings as he gesticulates widely along the technical area during Aston Villa games. The former Spurs first team coach turned Aston Villa manager was under no illusions over what he was getting into with the struggling Premier League club. After all, successful Premier League clubs normally aren’t the ones announcing a new manager on Valentine’s Day.

Villa under Sherwood is a reclamation project. The club’s dip into the relegation zone is now a fight to stay just above it. The difference is what normally happens with struggling Premier League clubs with reason for optimism. The basics start working again.

On Tuesday, Villa got the ball to Christian Benteke, who did his job. Whether it was from the run of play or standing over a free kick, Benteke put the ball away. The difference was a point against a club trying to get out of the relegation zone, the kind of game Villa can no longer lose.

For Sherwood, it was a game they also should’ve won. “I am not sure how many shots they had – maybe five – and they scored three. So it’s disappointing to come away and not win that game,” Sherwood said. “But it’s not about what you deserve it’s about what you get. We actually got one point.”

That’s coach talk, part motivation and part criticism. If you’re making a list of what Aston Villa might’ve deserved this season, it’s going to be quite long. They’re a good team, and occasionally that means very little over the course of a Premier League season.

Right now, that’s the likeliest comparison to make among the relegation candidates. It’s not so much a game of which of these teams is not like the other. Instead, it’s exactly what Sherwood did after taking over at Villa, drawing out the quality. For Villa in 2015, that’s shorthand for Benteke. His goals shoved Aston Villa out of the relegation zone and now they’re keeping them just above the drop.

Aside from the three teams sitting in the relegation zone, no team really wants to be trying their luck when they’re only safe by a couple of points. Mid-table obscurity is no compliment, but it avoids playing through the various relegation scenarios and about what the other candidates are doing. We’re in the part of the season where a shock result from one of the teams in trouble potentially destabilizes the rest.

Villa and QPR played their 32nd game on Tuesday and they’ll come out of the weekend a game ahead. That’s an away date at Spurs, the kind of game this version of Aston Villa has no business winning. Not that it matters to a team in form and capable of salvaging points from the kinds of games they lost prior to Valentine’s Day.

However you choose to divide the credit, Aston Villa as a unit is a noticeably better team. That doesn’t undo what got them here. Relegation is very much a threat. Short of an unlikely charge up the table over a tough April and May schedule, this season is only salvageable by the club’s as unlikely Wembley date with Liverpool in the FA Cup semifinals. Villa play right now to avoid the worst outcome. With that in mind, they’re playing exceptional soccer.