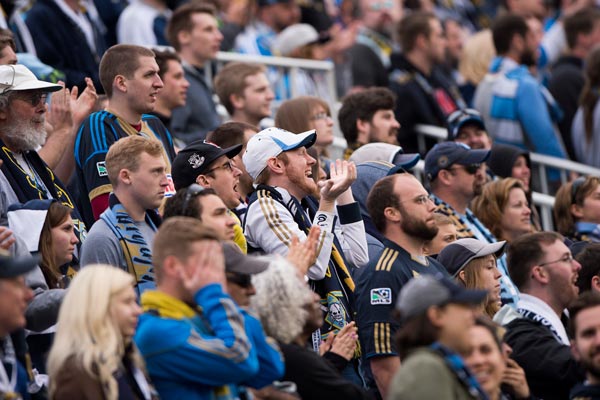 By Tony Edwards – San Jose, CA (Apr 28, 2015) US Soccer Players – Which MLS coach said this after their Saturday game?

“When you play like that, you’re always going to get beat,” our mystery coach said. “That part of the equation was not good enough on our side. We have to be much better. Much better.”

“There are not many positives to take away from this game,” this coach said.

“You’re going to give up chances when you play against 11 men, and we did. We have to get back to work because one thing we’ve done very well is that we’ve rebounded when we’ve took one on the chin.”

“I learned a lot about a lot of players tonight, the guys that stuck with it and pushed, and the guys that bailed out. You want to be able to look yourself in the mirror after a game and say you gave everything.”

That would be Peter Vermes, Jeff Cassar, Carl Robinson, and Jim Curtin. You might remember that Vermes’s team walked away from Houston with a point, controversially. While Kansas City is having a difficult time recapturing their form and style of play from their MLS Cup season, they are, at least in a playoff position, as are Robinson’s Whitecaps.

As is typical early in the MLS season, the differences in games played make it difficult to accurately judge standings and team strength. Montreal has five games in hand on the Union, while Toronto has three.

However, we can write off these situations as unique. Toronto has their stadium renovations. The league put Montreal’s focus completely on the Champions League. If you’re one of those who treks out to Chester on the weekend, you can’t fall back on the schedule.

Piled on top of the schedule is Philadelphia’s league-worst goal difference, a product of the schedule and some defending that is unacceptable at this level. This week’s game with Toronto all of a sudden becomes not just another game in early May.

With their goalkeeping controversies, roster management, coaches who aren’t coaching on the payroll, and underperformance relative to the rest of the Eastern Conference, it’s entirely possible Philadelphia has replaced Toronto and the Red Bulls as the most mystifying franchise in the conference, not an easy feat.

You could argue the Union are just continuing the Philadelphia professional soccer franchise arc. The Atoms flew high then were, umm, split. The Fury were briefly rock stars. The Fever started well without putting down any roots. That alone should be worrisome for the league’s leadership. What Philadelphia is squandering, however, is a built-in fan base and limited competition in a market known to vote with its wallets when a team isn’t winning. Proof of that are the Sixers and Phillies attendance figures.

MLS’s version of parity and the quality on the roster will allow Philadelphia an opportunity to get into contention at some point this season. That’s all it guarantees, though, the opportunity. The Union would probably look at a clean sheet against Toronto as a step in the right direction. However, should the goal difference get worse, serious questions raise all the way to the level of the management. It might be that Philadelphia is having a stuttering start to a campaign that rights itself. It might be that the Union need to practice patience and they are next year’s 2014 DC United.

Or you could argue that, on evidence, four of the six Eastern Conference playoff spots are already spoken for this season. Of the six other teams in the conference, against which teams are the Union favorites?