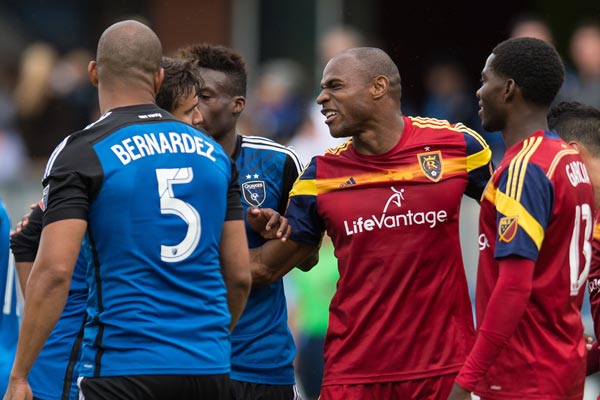 By Tony Edwards – San Jose, CA (Mar Apr 14, 2015) US Soccer Players – A month into the season, how many teams in Major League Soccer are undefeated? Orlando? DC United? Two. Only the Red Bulls and Real Salt Lake don’t have a red ‘L’ next to their name on MLSsoccer.com’s Results Map page.What about the game report from WhoScored.com on the Kansas City-Salt Lake “game” on Saturday night. Under strengths for Salt Lake, the statement was the unfortunate boilerplate “the team showed no significant strengths.”

Throughout the last five or so seasons, a Real Salt Lake game resembled what people the world over would call soccer. More so than any other MLS team, when you watched Salt Lake there was no grinding it out for a road draw or trying to hit a superior team on the counterattack. What we saw was patient, possession soccer, or at least the MLS version of that. It’s not to say that watching RSL was like watching Guardiola’s Barcelona, but the principles were there. An established system, solid defense, professional players put in a position to succeed, and not changing your game plan no matter if you were lined up against Landon Donovan or Shea Salinas.

A year ago, the NHL’s most consistent regular season team of the past decade, the San Jose Sharks, were up three games to zero on their rival Los Angeles Kings in their first round, best of seven, playoff series. The Kings, as you know, took the series and eventually the Stanley Cup.

For the Sharks, this led to a summer of indecision. Their general manager, Doug Wilson, declared them a “tomorrow team,” then hedged his bet by saying he still expected the Sharks to make the playoffs. In the process, San Jose’s biggest offseason move was to strip their captain of the ‘C’ on his sweater and try to integrate more younger players into the team. The result: from a number one seed in the NHL’s Western Conference last year, this season they didn’t even qualify for the playoffs. Three-quarters of the way through the year, the Sharks best player, Joe Thornton, and Wilson engaged in a very public disagreement over Thornton’s personality. While all parties publically patched things over, it was another symptom that a formerly elite team had lost its bearings.

The perhaps strained parallel is that Real Salt Lake, of course, suffered during the playoffs to another Anschutz-team, the LA Galaxy, and then went through a difficult off-season, losing their general manager to a direct rival. Salt Lake may be undefeated, but this much-publicized transition to a 4-3-3 and integration of younger players isn’t happening smoothly.

Salt Lake is 18th in MLS in shots per game, at 9.4. But Tony, Dallas is averaging fewer shots per game, and everyone loves Dallas. The difference being, about half of Salt Lake’s shots are from outside the 18-yard box, while less than a third of Dallas’s shots are.

Salt Lake is also 19th in total passes in MLS, at about 368 per game. Yes, San Jose and Philadelphia attempt more passes a game so far than Salt Lake. They move up to 13th in total number of accurate short passes, but they trail leaders Orlando by about a hundred short passes a game.

Is this much about nothing? Perhaps. It’s only been a month and Salt Lake is in the mix in a competitive, but admittedly underwhelming Western Conference. How many of us, however expect to see the Galaxy and the Sounders not in the playoffs at the end of the season? Portland can’t continue to be this inconsistent (one would imagine).

Maybe it’s just a matter of the team not yet coming together and sticking around is enough for now. It’s not like Salt Lake’s playoff destiny is determined in April (or May or June). But maybe that organization now has some very difficult choices to make. The calm hands on the reigns in Jason Kreis and Garth Lagerway aren’t there anymore.

Yes, ownership is spending money in starting a USL team. In Jeff Cassar and Craig Waibel they have intelligent, dedicated professionals in place. Then again, even experienced team builders can overreact and stumble. MLS isn’t known as an overly patient place, as rebuilds can happen over one offseason. The trick is to make sure your learning curve doesn’t overwhelm your players and that the right people are given time. Right now, RSL is quickly becoming the MLS example of an organization stumbling in an attempt to keep what they already had.