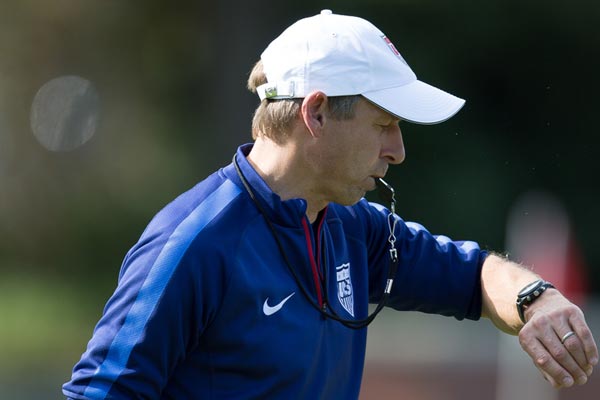 By J Hutcherson – WASHINGTON, DC (Apr 14, 2015) US Soccer Players – The USMNT finds itself in an interesting situation playing a friendly outside of the FIFA international calendar. Unlike the normal scenario, where the absence of most of its European club players would throw the setup into disarray, USMNT coach Jurgen Klinsmann has options.

Though nobody is going to mistake the USMNT lineup that takes the field at the Alamodome on Wednesday as first choice, it’s certainly not second or third. That’s the difference the return to MLS of several senior members of the USMNT makes along with the availability and necessity of Liga MX-based players. Things changed for the USMNT, and it happened quickly.

Even the absence of MLS-based players Clint Dempsey (minor injury) and Jozy Altidore (red card suspension) doesn’t leave the USMNT desperate. This isn’t a team full of opportunities for players on the edge of selection playing alongside teammates also playing in hope of another look. Instead, it’s the framework of the first choice squad with enough players who know what that’s like in practice as well as theory.

Obviously, players are missing that are likely to factor for the USMNT in this summer’s Gold Cup. Julian Green is the only representative of the Bundesliga contingent and DeAndre Yedlin represents the England-based players after playing his first game in the Premier League a few days ago.

Still, this isn’t a redo of the old issues with the January camp. There’s more to it this time than an open audition with players trying to combine with teammates they may never play with again. It’s not a couple of members of the senior squad involved to give the squad its shape.

What Klinsmann does with this on Wednesday is a different question. He certainly has the players to experiment, testing out positional play against a less representative version of Mexico. There’s space for the occasional miscue or misstep without the same pressure as a full availability international.

For the players on the verge of the USMNT, there’s a different kind of pressure. This isn’t an opportunity to create an opportunity, the long standing issue with succeeding outside of the international window in January and then needing to prove it all over again with a first choice version of the squad. Instead, this time it’s an opportunity to stay on Klinsmann’s mind when he’s designing his Gold Cup roster.

Right now, the Gold Cup is the sole focus. It’s not just trying to avoid what would be a frankly entertaining scenario of a Confederations Cup play-in game. It’s also another opportunity for a proof of concept for Klinsmann’s vision for the USMNT. More to the point, it’s an opportunity to prove a stage of that concept. Summer 2015 is a step, with qualifying starting earlier than ever this Fall.

Few National Team coaches are shy about stressing the importance of player availability, but Klinsmann goes farther than most. He’s quick to call any availability important to his plans, and there’s no reason to doubt him. If the coach believes he needs the time, then time becomes essential.

What he has in this short stretch outside of the international calendar is the luxury of looking. He can plug in players in real game scenarios that don’t exist on the practice field. He can see who steps into roles and does the comprehensive job international soccer requires. With a version of his squad, he has a different look at what works and what doesn’t.

Klinsmann creates time for his squad, first in January and now in April. An April friendly outside of the FIFA calendar isn’t likely to make the difference in the Gold Cup, especially when the opponent is the other Gold Cup favorite. Instead, it’s about sticking to a process not solely defined by the international framework.