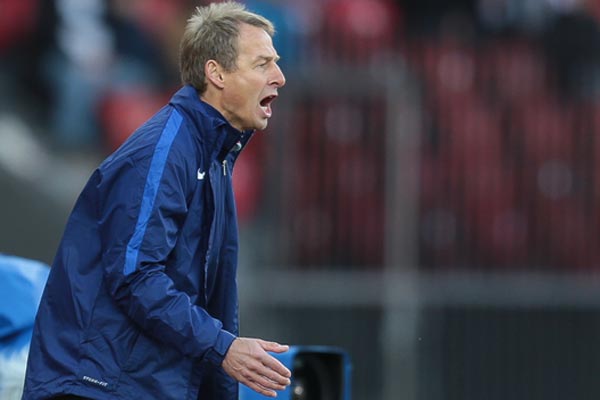 “I’m just used to it. I think it’s always easier when you’re used in the position where you’re playing.” Fabian Johnson to ESPN FC in Zurich this week.

“Too often students are given answers to remember, rather than problems to solve.” – Roger Lewin, science writer.

By Charles Boehm – WASHINGTON, DC (Apr 1, 2015) US Soccer Players – The USMNT‘s 1-1 draw with Switzerland on Tuesday featured well over an hour’s worth of cohesive movement, coherent ideas, and encouraging play from Jurgen Klinsmann‘s team. It was more than enough to provide a positive waypoint after last week’s discouraging evening in Denmark. Thanks to a subdued crowd and a well-aimed microphone, it also gave television viewers a riveting, if short-lived, window into Klinsmann’s verbal directions along the touchline at Stadion Letzigrund for a sizeable chunk of the first half.

Klinsmann’s insistent, repetitive exhortations regarding his players’ specific movements and actions lent something of a training-ground feel to a nominally important international friendly. It was more than worth it to get another realistic impression of the German-American’s technical-area demeanor.

Michael Bradley was a frequent subject of Klinsmann’s communication. There generally seemed to be more enthusiasm than intellect in his advice to the midfielder, here deployed yet again in the advanced playmaking role that represents both high compliment and golden handcuffs.

Despite a long track record of excellence in deep midfield and between the penalty boxes, Bradley continues to play in a role which is simply not second nature for him. Thus, the USMNT midfield remains short of optimal, the coach’s real-time instructions notwithstanding. Klinsmann may have simply conceded that this spot is the thinnest on his depth chart, determined to convert his most accomplished center mid into a creature of “the hole” behind the strikers.

Bradley’s tigerish intellect and relentless work rate, both now and at the World Cup, underline his obvious willingness to run himself into the ground without complaint in his efforts to fill this need. Klinsmann’s in-game feedback aside, asking one of your best players to compromise his own impact to compensate for the quirks of the wider player pool – even during a time of experimentation – looks like a harsh request indeed.

The Toronto FC star’s innate sense of duty compels him to track back to help defend when his team are boxed in. On Tuesday, he made a bevy of defensive interventions in the US penalty box, affirming that he’s just not the type to stand and wait for the ball. Even when his mileage levels routinely flirt with global milestones, Bradley’s ability to connect play remains impressive. He completed around three-quarters of his passes against Switzerland, below his own demanding standards but still sharp relative to the team total of 311 passes.

Bradley can play the traditional #10 role, and he’ll continue to improve if given minutes there. However, even if he’s the best man available for that spot, that doesn’t make it the best assignment with which to utilize his special qualities. Like the trial run of Jermaine Jones at center back, it’s worth asking how well the player can learn a new position when he retains a more familiar tasking at club level.

The quote at the top of this page from Johnson, the USMNT’s most versatile wing contributor, drives home the limitations of Klinsmann’s favorite “comfort zone” talking point. Like Bradley, Johnson has adapted well to a litany of different positions and assignments over the years. He’s responded to the coach’s urging to test himself at the highest levels.

All of that said, a well-oiled team structure is a major facet of nearly every individual’s success. The USMNT coaching staff’s willingness to tweak almost all variables at all times during many of these friendlies hinders that.

It’s laudable to challenge players wherever possible, and struggle is a necessary component of the improvement process. Putting on the uniform and performing well on game day requires familiarity.

Many youth coaches and other educators use the “guided discovery” concept. It’s a method intended to activate their pupils’ understanding by blending an experiential component into the basic process of information delivery. Though he’s never cited it directly, it’s clearly a part of Klinsmann’s ethos. Remember that he dubbed 2015 “a year of education in many, many areas”. He’s eager to see his players take personal responsibility for self-improvement.

Others see guided discovery as a catchphrase for slackness of instruction, a justification of chaos and uncertainty in the process. Time is and will always be limited for national teams. Every hour that Klinsmann spends on fitness or nutrition tutorials for grown professionals is time he isn’t spending on drilling simple, clear tactical priorities into his men – a foundational framework that can allow their individual self-expression to blossom.

Is Klinsmann teaching his squad how to solve problems, or merely giving them more to remember? The answer could determine the lasting benefits from these friendlies.