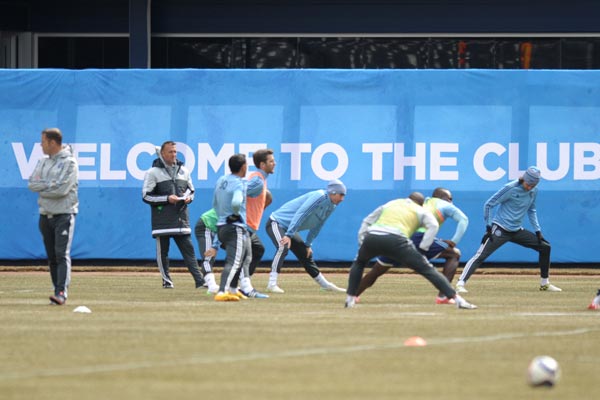 By Jason Davis – WASHINGTON, DC (Apr 22, 2015) US Soccer Players – In a world dominated by on-demand technology, where the number of live television events viewed in large numbers is shrinking by the year, sports are more valuable than ever before. The premium on sports is evident in the exorbitant fees commanded by properties across the spectrum. As networks scramble to fill airtime with programming they can count on to attract eyeballs (and deliver ad revenue), the price for games played by adults is rising at a rate much faster than even the most flattering predictions.

The sports television bubble has now enveloped Major League Soccer. Though the fees paid to the combined league/US Soccer group do not come near the billions spent on other American leagues, MLS is nonetheless benefiting from the rampant investment in sports.

Fox, ABC, and, Univision regularly state their belief in the future of MLS and American soccer. Their decision to hand $90 million in combined money to the league is as much about securing live content as it is about the rise of the sport in the United States.

Soccer in North America is most definitely rising. In addition to the television windfall, MLS is riding a wave of rapid expansion that is pushing the number of participating teams well beyond anything imagined back in 1996.

After adding two new teams in 2015, the League will rush into new markets in Atlanta and Minneapolis, with Miami, Sacramento, San Antonio, and St. Louis all somewhere on the radar for new clubs.

Expansion fees might also exist in a bubble. The cost of joining MLS (a reported $100 million for Minnesota) is up 700% since 2006. As long as MLS attendance remains strong and the TV money improves, those fees make sense. Should the TV bubble burst, however, and the valuation of the average MLS franchise might not reach expansion fee levels.

The expansion train steams ahead with no signs of stopping. In light of the swell in interest, MLS is reconsidering its previous position that 24 teams represented a full build out of the league, at least for the time being. The chances that MLS grows well beyond that number, and on short timeline, are high. The fees play a role, but for the most part the rapid growth in teams is simply MLS attempting to establish a foothold in as much of the country as possible while demand is at its peak.

It’s difficult to know how much of the current expansion builds on actual demand. The different conditions in places like Orlando, New York City, Minneapolis, and Sacramento don’t allow for a black and white assessment of the league’s policies. It might not be fair to say that Minneapolis doesn’t “deserve” an MLS franchise, but considering the difference in attendance at lower division games in Minnesota and Sacramento, Bill McGuire and company can’t claim to win out on that particular metric. If MLS is guilty of playing an American soccer version of “Risk”, they’re being careful to choose markets that show promise, even if no one can pin down what the criteria might be.

The sheer number of large cities in the United States, not to mention the sheer size of the country itself, allows the mind to wander. What exactly does a complete MLS look like? How many cities can support the sport? How many markets that already have teams in the suburbs can support new teams in the urban center? Should MLS move past what even the other American sports leagues have created to push towards 34, 36, or even 40 teams? Does the traditional model of interleague movement so prevalent around the world mean a time where MLS controls two leagues operating under their banner?

Forgetting the mechanisms needed to get to that point, a rosy picture of the league’s future conjures images of either a two-tiered system, or one that operates two separate leagues coming together for combined playoffs. It’s either that, or stop expanding because the number of teams will become unwieldy.

The positive spin is that MLS is cashing in and building for the future with the expansion policy. New cities with MLS dreams (it’s possible to list another 20 candidates that aren’t outside the realm of possibility without much effort) are popping up all the time. There’s logic in the reasoning that more teams means more coverage, which should very naturally relate in more fans. For TV purposes, those fans are viewers. More viewers makes MLS worth more as a television property and the resulting improved contracts then feed back into the product.

The less forgiving take is that the league is mortgaging the future by overreaching now, when so much of the demand smacks of “fad.” Cities with one or no major sports franchises see MLS as an entry-level option, the starter home of pro America sports. The building costs for the average MLS stadium is a fraction of those for any other sport, including those played indoors, and the league is the only one still expanding. The attraction isn’t necessarily about soccer at all.

There’s no guarantee that the TV sports bubble holds. While no current vision of the future predicts that sports won’t still be the leading live element of broadcasting, it’s quite possible that the landscape changes dramatically through technology or tastes.

If Major League Soccer’s TV revenue does not keep pace with the rate of expansion, many new owners will be holding the bag on franchises not worth what they paid for them. That will have a disastrous effect on the amount of money they’ll be willing to spend on soccer. A competition full of underfunded teams is something MLS supposedly left behind.

Money is pouring into a league that still doesn’t draw significant television audiences. Major League Soccer’s future hinges on what happens first. That disparity resolves itself with big gains in ratings, or the bubble on sports rights fees bursts and the league goes back to getting what it deserves.

This time the rumor is FIFA potentially sanctioning a European Premier League in competition with UEFA’s Champions League, but it’s a familiar story.