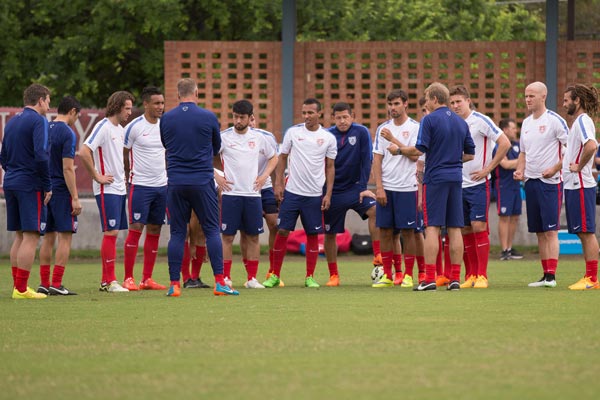 By Charles Boehm – WASHINGTON, DC (Apr 1, 2015) US Soccer Players – With both rosters finally official and the teams in place ahead of Wednesday night’s clash, another USMNT vs Mexico week is upon us. From the locale to the squads to the context, the latest installment provides many reminders of just how much this rivalry has changed over the past decade of warp-speed evolution.

Middle America only truly awakened to it with the release of the head-turning results of the 2010 Census. That process of demographic diversification that has pushed the nation’s Hispanic population into the ascendancy dates back decades. In many ways, San Antonio, site of this week’s match is its starting point.

Situated at an ancient crossroads of cultures, the Alamo City has long been the unofficial capital of “Borderlands,” the sunbaked regions of the mind that straddle the US-Mexico frontier. Proudly bilingual, bi-cultural, and globally cosmopolitan, nearly two-thirds of the city’s population of 1.4 million is Latino. It showcases the hybridized nature of our collective future as well as any place in North America – and millions of people of all kinds are flocking to get a taste.

While Austin – its smaller, whiter near-neighbor to the north – gets more press, San Antonio is Texas’s fastest-growing metropolis for the past decade-plus. No longer just a military town, its surging numbers in population, job creation, and real-estate development tell the story of a powerful economic engine.

Soccer has followed, growing well beyond the de rigeur huge gates for Mexico matches. El Tri have not only visited for friendlies. They played a World Cup qualifier at the Alamodome, a 10-0 ritual slaughtering of Caribbean minnows Dominica early in the 2006 cycle. With an intimate soccer-specific stadium, 2014 NASL championship trophy and authentic MLS ambitions in hand, the San Antonio Scorpions are thriving in the second division. It says a great deal that the San Antonio’s club ambitions – unlike the many others across the continent – have the support of none other than the Mexican Football Federation itself.

San Antonio nimbly merges a range of contrasts. The Alamo and the rest of its historic downtown draws more than 25 million tourists a year, while its business districts welcome Toyota and myriad other modern businesses. Foodies can delight in blue-collar Tex-Mex lunch platters all over town, then seek out cutting-edge fusion cuisine on white tablecloths that night. It’s a city that for centuries has looked both north and south for inspiration, something the rest of the US is finally learning to do.

In a similar vein, Wednesday’s matchup resides in the context of a long-overdue evolution in how US Soccer views its border rivals.

There are a range of reasons why USMNT vs Mexico meetings have grown into the colossal affairs they are today. Chief among them is the lurid appeal of “otherness” that El Tri represented for the United States’ soccer community when the USMNT began to climb out of obscurity in the 1990s.

Mexico’s National Team was not only the cocksure, strutting giant standing between the Yanks and CONCACAF supremacy. It was also the on-field manifestation of a southern land infused with a million gringo fantasies and nightmares, the warm, exotic place associated with escape, indulgence, and danger that our ancestors both feared and lusted after. Factor in the political hubbub about immigration that has bubbled for much of that time, and you have a combustible mix that helped make this game so deeply compelling (and, occasionally, ugly in the stands).

In recent years, our sensibilities have changed. Today Latin America is less “the other,” and more simply “us.” The numbers of Mexican-American soccer consumers have grown so enormous as to be impossible for MLS, Soccer House, ESPN and their other partners to ignore. The US Soccer Federation recently launched its first Spanish-language Twitter account. English-language coverage of the Mexican game is the fastest-growing segment of many US-based soccer websites. Major Liga MX contests draw the biggest television ratings of any club matches in this country.

El Tri’s stars are nearly as desirable to Madison Avenue as their USMNT counterparts. Witness the visibility of their current squad’s most ballyhooed strikers. Erick “Cubo” Torres is one of MLS’ most prized possessions. Oribe Peralta’s smiling visage hawks an energy drink on US TV.

Conversely, US players have ventured south in greater and greater numbers, finding opportunity, acceptance, and attractive wages in the Mexican leagues. The USMNT coaching staff tracks and selects them just like any other Yanks abroad. While everyone knows how carefully Mexico and its clubs scout expatriate populations in the US for talent, Jurgen Klinsmann and his staff can take pride in the recent capture of goalkeeper William Yarbrough, a Texan by lineage who’s spent his entire life and career in Mexico.

It’s harder than ever to draw a clear line between “us” and “them” in this rivalry, as one insurance company who sponsors both federations cheekily noted in a TV spot last year. Regardless of your allegiance, that’s a beautiful thing.