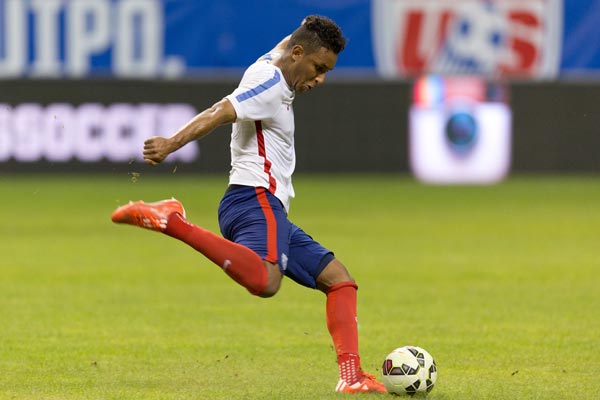 By Charles Boehm – WASHINGTON, DC (Apr 15, 2015) US Soccer Players – After the great Uruguayan author and passionate soccer lover Eduardo Galeano passed away this week, the sad news sent his many affecting words about the beautiful game reverberating around the world as readers and fellow fans paid tribute to his life and works.

One of Galeano’s more repeatable passages was his description of Latin America as “an intimate land condemned to amnesia”. It’s hard not to apply that arresting snippet of language to perhaps the hottest topic ahead of Wednesday’s international friendly between the USMNT and Mexico in San Antonio.

A sellout crowd of nearly 70,000 will pack the Alamodome to watch the latest installment of the region’s hottest, most compelling rivalry. Intriguing storylines abound on both sides. Unfortunately, the question of the indoor stadium’s temporary playing surface has reared its head above all the others.

The reason is obvious. On-site journalists posted myriad photos of uneven, patchy sod and the Mexican federation relocated El Tri‘s Tuesday training session – with some reports even hinting darkly that the visitors might refuse to play on such a subpar pitch. The US Soccer Federation quickly dismissed that idea, announcing that “improvements have been made in the past 24 hours” and promising “the field will be in playable condition in time for tomorrow’s match.”

None of this will surprise longtime USMNT observers, of course. We’ve been here before. Detroit, Seattle, and now San Antonio. The temp grass now in question under the Alamodome’s birthday-cake-shaped roof is just the latest in a history of poorly crafted compromises between the vague goal of an ideal playing surface and the desire of the federation and its partners to maximize revenue at every possible moment.

“It’s tough. I don’t know why they would schedule [games] in venues where you have to lay the grass over the turf,” Clint Dempsey said in 2011, when the poor surface at Ford Field become a major talking point at the USMNT’s Gold Cup match vs. Canada. “Maybe it is about bringing soccer in the States to a new area — I am all about that and both teams had to deal with the conditions, but ideally you don’t want to play on a surface like that.”

His coach at the time, Bob Bradley, noted “it’s tough on the players” because such pitches are generally slower, sloppier and heavier in terms of both in-game play and postgame recovery.

Yet two years later, we were having the same discussion at CenturyLink Field. Seattle’s well-established devotion to the sport had finally earned them hosting rights for a World Cup qualifier, but the federation’s desire to bypass the mixed-use venue’s firm, slick turf led to another “far from ideal” grass installation, in the words of Michael Bradley.

“You’d like to be playing on a field where it’s cut real short, and you’re able to get some water on the field before the game, and that creates a fast, wet surface that really is conducive to how we want to play,” Bradley added. “Seattle certainly deserves a game, but I think the field unfortunately leaves a lot to be desired.”

The USMNT is a huge draw anywhere in the nation nowadays, of course, and so are their Mexican counterparts. But the federation, even while its staff works to coordinate and control as much as possible, in effect outsources many important aspects of events like Wednesday’s.

The Alamodome – a rapidly aging venue built 22 years ago in the vain hopes of luring an NFL team to town – is responsible for the playing surface. It’s the job of stadium management to select and support the professionals who do this sort of thing for a living. All too often, this task becomes little more than a line item on a budget sheet.

With no full-time tenant since the San Antonio Spurs moved out in 2002, this stadium has been in “keep overhead low” mode for as long as anyone in South Texas cares to remember. Even its artificial turf has been a topic of controversy. Its first surface remained in place for more than a decade, drawing complaints from visiting college football teams.

The last time a US National Team played in San Antonio, the US women’s squad defeated Australia 4-0. Both teams watched in dismay as Matildas standout Kyah Simon tore her ACL in a non-contact movement less than a minute into her appearance as a second-half substitute on the worn synthetic grass.

So it might appear that organizers face an odd choice here. The inherent imperfection of synthetic turf, or the potentially dangerous risks of sloppy temporary grass. However, that overlooks the venues that manage to get it right.

As was discussed during the long-running controversy over the use of turf facilities at this summer’s FIFA Women’s World Cup, there are ways to lay down a safe, stable, good-playing temporary pitch. FIFA did just that at Giants Stadium and the Pontiac Silverdome during the 1994 World Cup and even at the 2013 Women’s European Championship. It does cost money, but the difference in price is hardly prohibitive, especially given the stakes.

If decision makers truly value the health and performance of the players in question as much as they say they do – and as much as the lofty prices for tickets like Wednesday’s match suggest – it should be an easy decision to demand a greater investment in such an elementary aspect of the game.