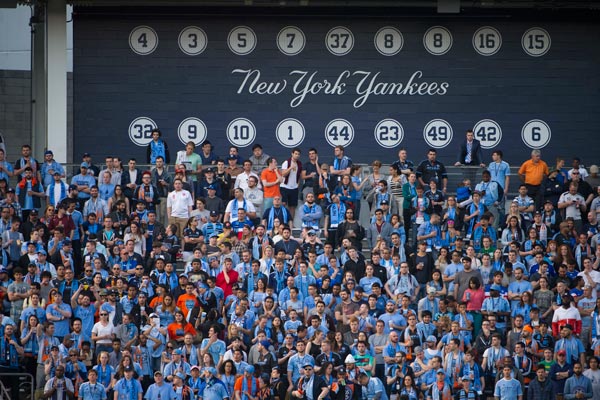 By Jason Davis – WASHINGTON, DC (May 6, 2015) US Soccer Players – It seems MLS got a little ahead of itself. In New York. In Miami. In Minneapolis. Even in Orlando. Four cities, either in the process of getting future MLS teams off the ground or in the early days of new franchise existence. Four unresolved stadium deals.

How did this happen, exactly? Though each circumstance is slightly different, they’re all troubling in their own way. Major League Soccer, perhaps smartly, perhaps greedily, latched on to rising demand for its product by rapidly expanding over the course of the several years. A batch of new teams in Seattle, Portland, Vancouver, Philadelphia, and Montreal all arrived in the league with success, in large part thanks to settled stadium situations.

Notably, every legislative element that needed passing to build or upgrade the stadiums in Portland, Vancouver, and Philadelphia received approval prior to the League awarded franchises to those cities.

In Portland and Philadelphia, the team occupied appropriate venues from the outset. The Whitecaps spent a year at a temporary stadium before moving permanently into a remodeled BC Place. Montreal waited out Stade Saputo construction at the city’s readily available Olympic Stadium.

Whatever the situation, no questions lingered over funding, no delays threatened the debuts of the clubs as planned. In light of recent events, an era when approved stadium plans preceded the birth of new MLS clubs were halcyon days. For the more recent examples, things have not nearly been so neat.

New York City FC’s struggle to find a place to build a new stadium for a Manchester City-backed club is the most prominent problem facing MLS. No known timeline exists for an exit from the ill-fitting confines of Yankee Stadium, where welcomes will wear out quickly. Believing that an owner and a partner (the Yankees) might boost the chances of locating a site for a stadium, MLS put expansion ahead of a deal. Whatever leash the league gets while NYCFC thrashes against the red tape of New York City government is entirely dependent on positive news leaking from the organization. If there is movement, the decision to start the team in a baseball stadium won’t look nearly as bad as it will if the team is stuck playing on the tiny field in the Bronx for years into the future.

Most of us recognized the trouble NYCFC would face. More surprising is the situation in Orlando, where a stadium project presented as signed and delivered now looks to be far from it. A funding gap of $30 million came to light when the Florida legislature bogged down in a fight over Medicare that led to the legislative session closing without the necessary committee rubber-stamping money already set aside for construction. Work continues on Orlando City’s new building, but there is clearly worry at the club and among soccer backers in the city. What was supposed to be a top rate stadium on par with many of the newer venues in MLS could now be a bare bones facility lacking most of the features that makes a soccer stadium “major league.”

No matter the assurances given or the presumption of passage, perception of MLS suffers from the situation. It was the league that chose to hand a new franchise to Phil Rawlins, Flavio da Silva, and the City of Orlando prior to delivery of all of the deal’s components. The problem does not rise to New York levels, but neither does it reflect well on the league’s process for vetting new expansion arrivals.

Especially because the league now has a habit of showing up in a city among great fanfare to announce their intentions to place in team in said city, only to have the efforts to secure stadium deals fall flat in their wake. Miami’s saga lingers and lingers, with little more than spurious promises that news will come “soon” to keep hope alive that a team will play in South Florida before the turn of the century. The day Don Garber joined David Beckham on a stage in Miami to proclaim Major League Soccer’s return to the city did almost nothing to prime the pump for the ex-Galaxy star and his partners. Rather than moving closer to a start date, the plan to go back to Miami exists in a stadium-hunt limbo.

A site is not the issue in Minnesota, post-MLS hosted “we’re coming” event, but problems do persist. Dr. Bill McGuire, owner of Minnesota United, wants the state to give his proposed self-financed stadium a property tax exemption. Lawmakers have balked, slowing down a process that received the foregone conclusion treatment at the league’s expansion announcement. Again, maybe MLS believed the situation to be under control, or perhaps the hope was an outward sign of commitment would push the deal to conclusion. When viewed side-by-side with the other expansion team stadium issues, the reality doesn’t matter. MLS again looks like it jumped the gun.

Worse yet MLS might not have the clout it thinks it does, even at the height of expansion demand. Flipping the formula, or more accurately moving in before accounting for every detail, simply hasn’t worked. MLS faces no issues in Atlanta only because the stadium plan there was always about the primary NFL tenant.

In every other case of expansion, proposed expansions, or future commitment to expansion, Major League Soccer is finding that the appetite for professional sports stadiums is nonexistent at local government levels. No matter how big of a deal the league makes out of top flight pro soccer coming to a given city, the minefield that is getting a stadium deal done is impossible to navigate cleanly.

Nothing says that all of these situations won’t end in positive resolutions, at least for MLS and its new expansion teams. For now, the disconcerting truth is that for all of the interest in its growing product, setting up franchises in new, downtown stadiums that will provide for their future success is proving harder than they thought it would.