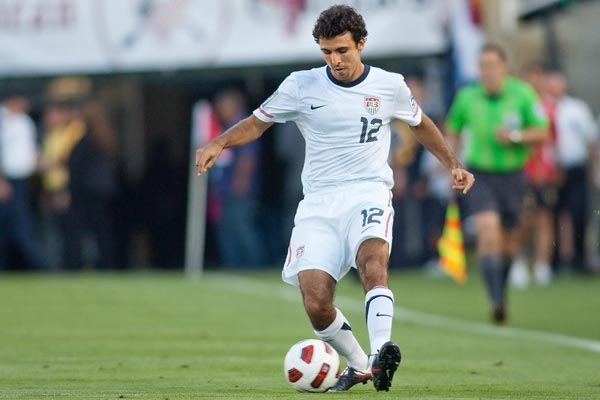 By Luis Bueno – RIVERSIDE, CA (May 28, 2015) US Soccer Players – Jonathan Bornstein is not known for his goal-scoring acumen. In fact, during his five years in Mexico, he hasn’t been known for much. No matter what happens over the next four days, though, Bornstein will go down in Queretaro history. Queretaro will play fellow surprising side Santos Laguna for the Clausura 2015 title. The first leg will be Thursday in Torreon while Queretaro will host Sunday’s decisive second leg.

That Queretaro are in the final is as unlikely as Bornstein being the one to put them there. Bornstein had played a combined 12 matches during his first four years there. This season, he has made 10 appearances for Queretaro, going the full 90 eight times. Bornstein has become a key figure under Queretaro boss Victor Manuel Vucetich, contributing greatly to Queretaro’s success.

Vucetich rightly gets the credit for the club’s turnaround. Known as King Midas because of his golden touch, Vucetich has led several clubs to prominence, including Monterrey during their CONCACAF Champions League dominance. Vucetich has tipped Bornstein as one of his team’s key players along the backline.

King Midas’ golden touch was evident in his selection of Bornstein. Prior to Vucetich’s arrival, Bornstein made one appearance for Queretaro. Vucetich was likely impressed with Bornstein’s approach, strong work ethic, and humility. That sort selection has made Vucetich who he is. Queretaro’s main figure is Ronaldinho, but the Brazilian star has had a turbulent time in Queretaro.

Yet, it was Bornstein and not Ronaldinho who accounted for one of the most important goals Queretaro has ever scored. The goal was product of a clever run, as Bornstein split Pachuca’s defense and ran onto a ball played in by Danilinho. Bornstein let the ball bounce past him into the penalty area and sent a left-footed rifle into the back of the net.

Bornstein does not often score goals but when he does he makes them count. His most famous goal prior was the goal he scored for the United States against Costa Rica in 2009 World Cup qualifying. The goal sent Honduras to their first-ever World Cup, and Hondurans instantly thrust Bornstein as a hero.

Prior to his goal against Pachuca, though, Bornstein had not scored in Liga MX. This goal though put him instantly into the pantheon of Queretaro greats, partially because of the significance of the strike but also because Queretaro has not had much history to speak of.

Bornstein though could help change that. With a series victory over Santos Laguna, Bornstein and the rest of the Gallos Blancos would be legends in Queretaro. For Bornstein, the title would be significant in that he would become the ninth American to win a Mexican league title.

In a span of one week, then, Bornstein could become one of the most accomplished Americans to play south of the border. Much like Herculez Gomez’ rise from obscurity to fame in 2010, Bornstein has already transformed himself from a forgotten player to an important cog in a championship contender.

That sort of run deserves to end with a championship.