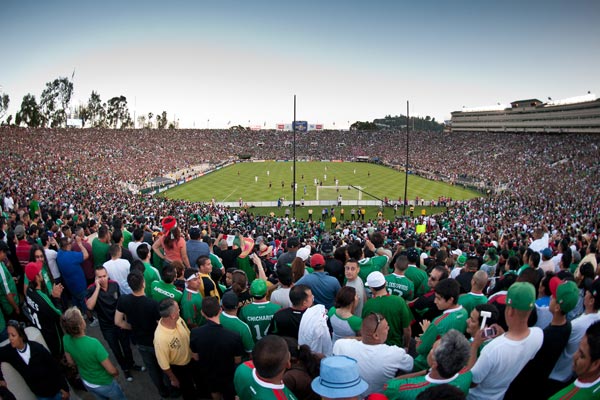 By Luis Bueno – RIVERSIDE, CA (May 20, 2015) US Soccer Players – There are not many tangible things about Los Angeles’ second MLS club. There is no coach, no roster or jerseys. There are scarves but even those bear a team name and colors that could change. Nevertheless, this week the club has created something that has given the franchise a boost nearly three years before the team kicks off.

Los Angeles FC has created a buzz. In the entertainment capital of the world, creating a buzz is quite an accomplishment.

LAFC owners revealed plans for their state-of-the-art home. A $250 million, privately-financed endeavor, the stadium gives hope that this venture into Los Angeles is not only not misguided and poorly thought-out but rather has a target of becoming a major player in the LA market.

This buzz though is not a soccer-only buzz. Rather, it spread quickly across the mainstream – from television and radio stations at the top of their broadcasts through social media interactions between regular folk.

A stadium such as the one LAFC owners are planning is the kind of thing that gets people talking. The price tag alone draws attention, but to have a modern stadium along with a dedicated training ground, a soccer museum, conference center and restaurants attached with it is fueling that excitement.

The proposed stadium sits in Exposition Park, right next to the Los Angeles Memorial Coliseum and a couple of miles away from Staples Center. Location is everything for LAFC. To be located in the city of Los Angeles and not a far-flung suburb is significant. Chivas USA were out-of-sight, out-of-mind for nearly the entire LA community, but LAFC will be front-and-center from Day One.

Of course, that Day One will be in 2018 instead of 2017, a detail that was quietly put out there. The yearlong delay is actually a good thing. Not only will it allow the club to take the field the right way, it will help the team ride the soccer wave that will swell that year. World Cup years are years when soccer is mainstream.

As the US national team prepares to make noise in Russia that year, general sports fans will find themselves caught up in the excitement and grandeur of the world’s greatest sporting event. LAFC will certainly capture some of that for themselves.

LAFC will stay visible until then. With the powerful backing the club has, it will be difficult not to. Principal owner Henry Nguyen has surrounded himself by Hollywood executive Peter Guber as well as sports celebrities Magic Johnson, Mia Hamm and Nomar Garciaparra.

With this kind of backing, don’t expect to make another mistake Chivas USA made. This club will not nickel-and-dime its way around MLS. LAFC may not be an MLS champion right away, but this club will be home to some major star power. LAFC is not going to spend a quarter-billion on a stadium and forget to spend on some top-level talent.

MLS failed in its previous attempt to extend itself in the second biggest city in the country. Now that the league is actually entering Los Angeles proper, the idea of a second LA team seems not only plausible but necessary for the league to take a proper foothold in the LA sports market.