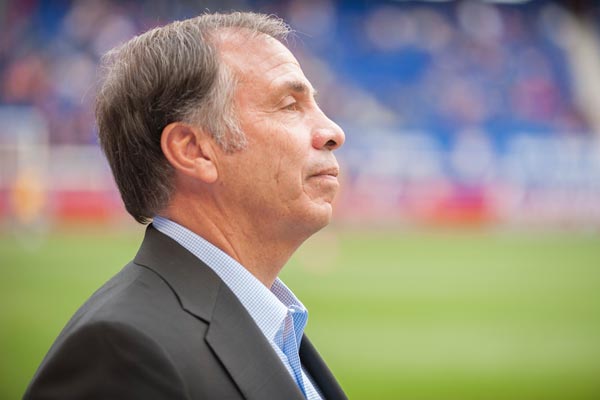 By Luis Bueno – RIVERSIDE, CA (May 6, 2015) US Soccer Players – In recent years, the LA Galaxy have been synonymous with championships and glory. The team piled up three MLS Cup trophies in a four-year span and fancied themselves as the league’s best-ever club.

Of course, that was when Landon Donovan was around.

The LA Galaxy wanted to redefine their club once Donovan was gone, to forge a new identity. If the season’s first two months are any indication, the identity has not been a positive one. Nowadays, the Galaxy are middling and workmanlike, not quite the type of team their fans and opponents are used to.

Beginning with a match Wednesday at Real Salt Lake, the LA Galaxy will play three road matches in a 12-day span that could break the season. The Galaxy are right in the middle of the Western Conference standings – four points out of first place, four points out of last place. The club could set itself up for a long summer without pulling some victories out of their matches at Real Salt Lake, FC Dallas and Orlando City.

Key to this unsightly play has been Robbie Keane. The reigning MVP has missed the last three games. He’s unlikely to factor in during the team’s road trip. Keane’s nagging hamstring issue should not be enough to derail this team but it has. The club’s last two matches have featured Galaxy players struggling to generate chances and may not have been draws had goalkeeper Jaime Penedo not played spectacularly in goal.

Now, the Galaxy were able to defeat Sporting KC by 2-1 without Keane around and defeated Seattle the match before that. Penedo again played a large role in those matches. Penedo saved the Seattle match with one of his top performances in MLS.

Strong goalkeeper play is something the LA Galaxy have been used to during their championship run but to be defined by strong goalkeeping is not. Glitzy names like Donovan and David Beckham catapulted this club into its perch atop MLS. Nowadays, missing one player has left the Galaxy struggling to field a recognizable lineup. Ignacio Magnato, Mika Vayrynen, and Rafael Garcia occupied three of the club’s midfield spots against Colorado. On the field too was Bradford Jamieson IV, another player few have seen play.

Playing a lesser-regarded rival like Colorado, who had just played at New York three days prior, meant Galaxy coach Bruce Arena could have tinkered with his lineup. This was the first of three games in an eight-day span, and perhaps that is what he did. However, not beating a club like Colorado without some of the club’s first-choice players is alarming.

Keane or not, the Galaxy still have a style that they would like to play on the field and lately that style has been rather unrecognizable. Goals are harder to come by nowadays. The Galaxy have just 10 goals thus far, with Gyasi Zardes accounting for only one of those. The defense has only accounted for two shutouts this season. The Galaxy led the league with 69 goals last season, tied with DC United and Real Salt Lake for fewest goals allowed.

The Galaxy still have more wins than losses (3-2-2) and are still in sight of first place. Still, the club’s sluggish start is testament to how well they were with Donovan, and how much of a setback this year could be. Steven Gerrard will arrive sometime over the summer and he will add quality and flair to the Galaxy’s lineup. What shape this team will be once he gets here is anyone’s guess.