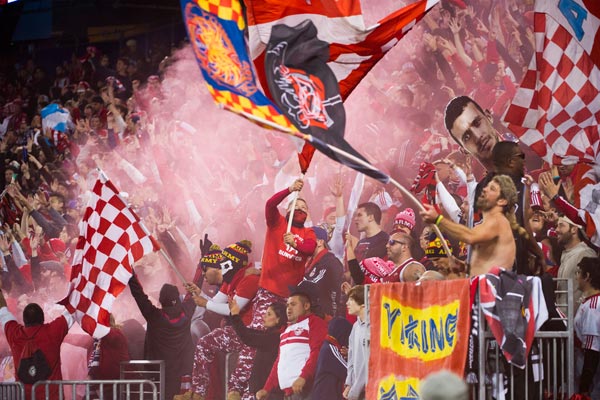 By J Hutcherson (Nov 23, 2015) US Soccer Players – In the search for what passes for transparency in professional sports, Major League Soccer is playing an interesting game. As part of the Men in Blazers convention, MLS commissioner Don Garber and a few of the league’s investor/operators seemed to talk openly, telling the paying audience the kind of things that would be shocking to hear only a few years ago. Garber, as relayed in a lengthy transcript from Philly.com’s Jonathan Tannenwald, covered a lot of talking points. That included clarifying what’s now a cliché of MLS, that eventually it will compete with the big soccer leagues of Europe.

For something that once upon a time would’ve been so dramatic, Garber’s remarks don’t exactly resonate. This is still MLS as we know it, a league that we’re always supposed to consider a work in progress. A test audience for the greatness yet to come. That’s been true from the opening game in 1996, through the scary stories we’re now hearing about the 2001-02 offseason, and even now in the league’s 20th season. Maybe at some point the league will let us know when we’re supposed to take it completely seriously as a topflight soccer competition.

Before dismissing that like Garber did journalists critical of him and his product, it takes a lot from any fan base to be constantly waiting for what’s next. Simply assigning “better” to the immediate and near future isn’t enough. Loosely defining “growth” as what’s good for the league under its own definitions also misses the mark. It’s almost surprising that league officials don’t borrow from general conversations on the internet and start addressing “haters” directly. It would be about as vapid and tone deaf.

If the 2014 season really was the high water mark for MLS doing whatever it wanted and perhaps choosing to explain itself later, there’s no guarantee that MLS’s version of transparency would be any better. Double the salary cap, triple the salary cap, spend to compete with Liga MX and then Europe… but not yet and not on any foreseeable schedule. It will take more money from TV deals with years to run. It will mean a reality where there is no sports TV rights bubble and fees will only increase. It will mean a set of circumstances favorable to MLS, perhaps unrealistically so. It’s saying what the fans might want to hear right now without the pressure of actually doing anything about it.

But wait, there’s more. MLS is using that winter of discontent back in December of 2001 and January of 2002 however they want. In fairness, there are probably more MLS employees who were around back then than working soccer writers still covering the sport. It’s easy to control a revisionist history when that contraction announcement is closing in on its 14th birthday.

Like everyone else on the MLS beat back then, I was on that call when Garber officially announced they were exiting the two Florida markets. The rumors were swirling since the end of the 2001 season. Talking to people working in MLS back then, it was easy to come up with more contraction candidates than viable franchises. The league was in trouble and everybody knew it. Now, that’s become shorthand for the scary story you tell to remind people that there’s no better time than now. What’s odd about it is that it overlooks MLS once again contracting a team just last season. Tampa was league owned in 2001. Chivas USA was league owned in 2014. The league ultimately treated both the same way.

Has anything really changed in the interim? League representatives would point to waves of successful expansion, downplaying the Chivas USA problem while playing up the successes. They’d also want to stress the revitalization effort in Kansas City along with the standard list of items that show MLS is better now than it was before. All fair enough, but it tends to talk over what’s still one of the biggest problems the league faces. It’s own structure.

Garber does a good job downplaying single-entity in theory and in practice. That’s what so many years in his role provides. He can talk about how he initially found the rules silly because most of those rules no longer suit his league. They moved on, substituting in new rules. That enough American soccer fans find the way MLS implements those rules concerning is only a problem if you focus on it. Once again, any MLS version of transparency exists only on their terms.

MLS leaders almost off the record doesn’t change that. If anything, it further clouds the public discussion of what’s best for the league. There’s still the feeling that this discussion only really exists between fans and journalists, with the league mostly separate and only including itself when it controls the stakes and the outcome. In other words, when they can put on a show. That’s part of the commissioner’s job in any sport, and it’s one that Don Garber does quite well. What it isn’t is that move to greater transparency and less reliance on a self-serving rule book. The one MLS continues to insist is crucial for its past, present, and future.